Using a molecule designed to overcome a roadblock formed by a common type of genetic flaw, researchers at the University of Wisconsin–Madison have made progress towards novel molecular treatments for Friedreich’s ataxia — a rare but fatal disorder — in the laboratory dish and in animals.

Friedreich’s, like at least 40 other genetic diseases, is caused by stretches of repetitive DNA that prevent protein from forming correctly.

The repeats can contain hundreds of identical, short sequences of DNA (such as GAAGAAGAAGAA …). In some diseases, including Friedreich’s, the repeats become roadblocks to cellular machines that decode the gene and start making the protein that the cell needs. In other diseases, such as the neurological condition Huntington’s, the repeats can result in excess protein, which itself can become toxic.

In research reported this week in the “first release” section of the journal Science, Aseem Ansari, a professor of biochemistry and genomics at UW–Madison, and colleagues showed that their “molecular prosthesis” can help cellular machinery overcome the blockade posed by the repeats in Friedreich’s ataxia. 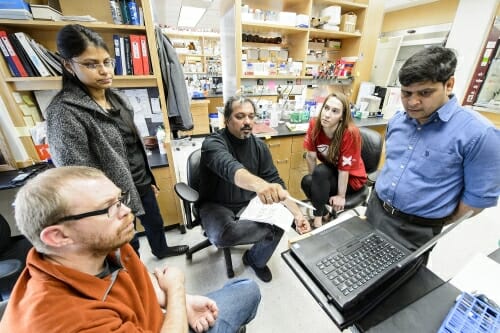 Aseem Ansari (center), professor of biochemistry, talks with his research group about their findings in his lab in the DeLuca Biochemistry Laboratories on the UW–Madison campus. Photo: Bryce Richter

One component of the prosthesis locates the repeats, then the second helps the cellular machinery soldier past the repeats to properly decode the gene.

Friedreich’s appears in only one American in 50,000, but it’s fatal and untreatable, says Ansari. “These kids accumulate repeats in a gene for a protein called frataxin that mitochondria, the cell’s powerhouse, need to process energy. Without frataxin, tissues that use the most energy get hurt first: the brain, heart and pancreas.”

As early as age 5, movement is impaired “because the brain does not have the energy it needs and it also accumulates DNA damage,” says Ansari, who has a joint appointment with the Genome Center of Wisconsin at UW–Madison. “Most young people with Friedreich’s develop severe heart problems and are wheelchair-bound, but the disease is so rare that few drug companies invest in it.”

In the Ansari group, Graham Erwin, Matthew Grieshop and Asfa Ali formed a team that designed and created the prototype molecule, and also orchestrated collaboration with colleagues at UW–Madison, the pharmaceutical firm Novartis, and a leading medical center in India.

The Science publication rested on two kinds of experiments:

The molecule being tested is designed to assist the enzyme that reads, or “transcribes,” DNA at the confusing repeats. Once it reaches the other side, the enzyme, called RNA polymerase, reads the gene and makes RNA that in turn codes for frataxin, the protein that is lacking in Friedreich’s ataxia.

One part of the new molecule is “a direction finder that we engineered to locate the problem in the patient’s genome,” Ansari says. Once it finds the troublesome repeats, “the second component brings in the machinery that helps RNA polymerase slog through the repeats and make the correct transcript and subsequently the functional protein.”

“Most young people with Friedreich’s develop severe heart problems and are wheelchair-bound, but the disease is so rare that few drug companies invest in it.”

Understanding the role of frataxin and how repeats block its synthesis started with studies in yeast cells and then fruit flies, Ansari says. “In those simple organisms, scientists teased out exactly what the repeat region was doing, and the same principles were at work in human cells. Without that understanding, we would not have been able to devise our molecules, which highlights the need to study biology at all levels.”

Although the biochemistry is complex, the concept of ignoring repeats is not, Ansari says. “If we compare the enzyme that reads DNA to an engine moving down the ‘track’ of DNA, the repeat may stop it cold, cause it to skip too far ahead, or jam it in the ‘on’ position so it makes a toxic amount of the protein.”

The new results published this week in Science suggest that “we have figured out how to turn on the part of the gene that is being ignored without doing anything anywhere else,” Ansari says.

Even as patients and families yearn for a cure, it’s likely to take several years before drug testing begins, Ansari warns. 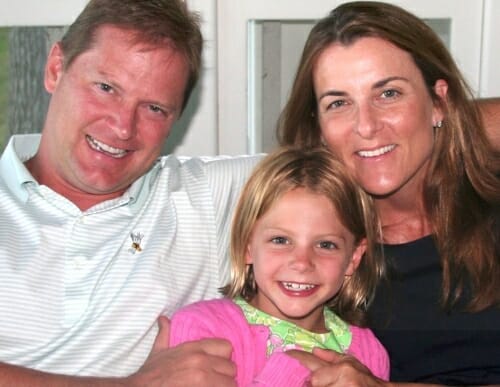 Three years ago, Annie Hamilton (center) was diagnosed with Friedreich’s ataxia. Tom and Karen, her parents, have formed a foundation to support research aimed at curing FA and other rare diseases. “We are very hopeful, very optimistic,” says Tom. Courtesy of Cure FA Foundation

Ansari, who has been trying to unravel repeats for about 15 years at UW–Madison, achieved initial success in 2004 when his group designed “two-headed” molecules with a “DNA reading head” that would deliver the molecule to a specific location in an individual’s genome, and a “docking head” that would dock a cellular machine to force the gene to be read correctly at that site.

Then, Ansari says, researchers found that the molecule got “distracted” while floating in a sea of DNA and failed to distinguish hundreds of “look-alike” sites from its actual target.

By 2013, funding had dried up, and only a grant from the W.M. Keck Foundation enabled Ansari to continue searching to outfox the repeats.

While many efforts to treat Friedreich’s are screening millions of drugs, “we are working from a deeper understanding of the problem,” Ansari says. “Once we understood why the enzyme was getting blocked, we rationally designed seven molecules to help the enzyme pass the obstruction.”

The Wisconsin Alumni Research Foundation has applied for two patents on the discovery, which Ansari thinks could ultimately be applied more broadly. “With recent advances in human genome sequencing, more than 40 diseases have been recognized as resulting from microsatellite repeats,” says Ansari, including fragile X, which causes developmental difficulties, and some types of muscular dystrophy.

“Now that we are starting to understand how to defuse these repeats,” he says, “we see this as a general solution, a molecular engineering principle. We would sequence the genome and figure out the problem, and make a molecule tailored for that individual. It’s a new precision-tailored path to personalized medicine.”