Darrell Bazzell: In his own words 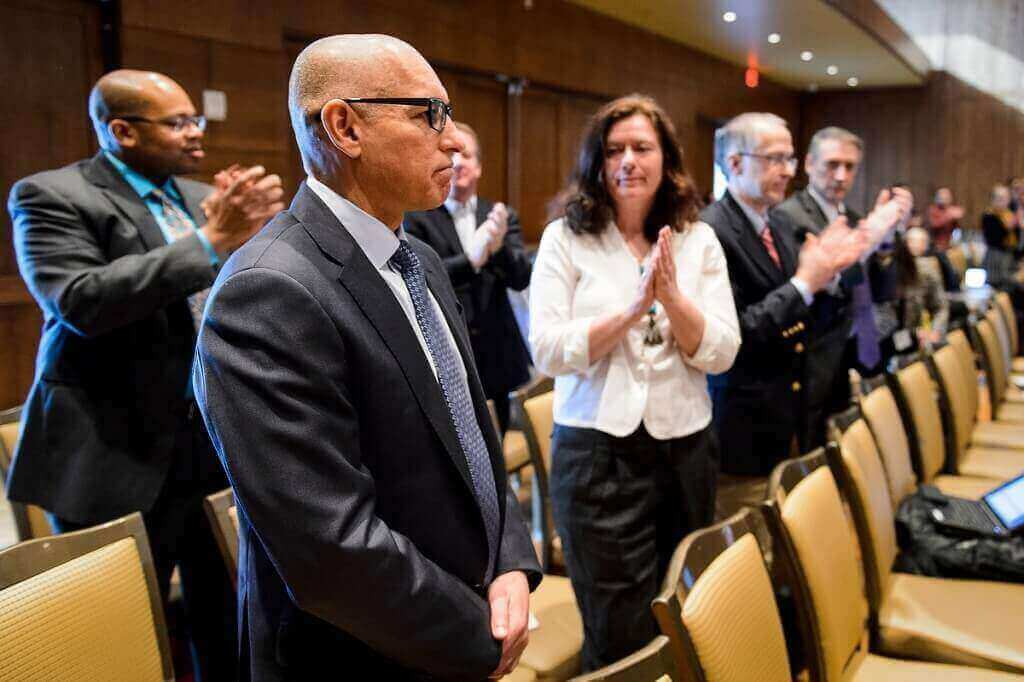 Vice Chancellor for Finance and Administration Darrell Bazzell stands during a special acknowledgment of his career contributions at a UW System Board of Regents meeting at Union South on Feb. 5. Photo: Jeff Miller

Darrell Bazzell didn’t apply to any other college than UW–Madison and he has used a distinct leadership philosophy during his 13 years as vice chancellor for finance and administration.

Widely respected and admired on campus, in the community and around the state, Bazzell shared these and other parting words of advice as he prepares to depart UW–Madison tomorrow for the University of Texas.

Amid final meetings and farewell lunches before his final day in the office, Inside UW caught up with him for a few minutes to reflect on his career in Wisconsin. An edited transcript of the conversation follows.

The campus community is invited to a farewell event from 2-5 p.m. Friday in Gordon Dining and Event Center.

Inside UW: What initially drew you here as a student?

Darrell Bazzell: I think as you know, I grew up all over the country, many different places. Ultimately, my family moved to Milwaukee, where my parents grew up. Having spent my high school years in Milwaukee, it actually wasn’t until my senior year that I started thinking about the possibility of going to college. I actually only applied to one place. I applied to Madison in the early fall of 1975. … I was so thrilled with the opportunity to come to school here; I recognized the academic excellence that the school offered; it’s my father’s alma mater.

IUW: So that must have been a thrill returning to campus as a vice chancellor?

Bazzell: It was hard in the sense that I had made a commitment to a career of public service, and having reached the point of being secretary of what many would consider at that time one of the largest, most complex state agencies, there wasn’t really anyplace else to go. And so, when this opportunity presented itself at that time, I was looking at some other opportunities, and I made a decision — I figured I was going to move on somewhere. It became an easy choice to come here.

IUW: It didn’t feel quite as rocky, back maybe 10 years ago. There were little flareups every now and again, but now it feels like that happens more regularly.

Bazzell: I think some of that really reflects the changing face of government, and particularly not just the executive rights but certainly the legislative branch and the way that it functions and relates to the executive branch. And certainly, in our state and all across the country as we’ve seen at the federal level, there’s been a real change in the way the two branches relate to one another. Certainly that’s manifested itself in the relationship of this institution and the UW System with state government, where, quite frankly, I see a little less problem solving. The relationship is not quite as smooth as it once was. One questions, at the end of the day, how much effort we’re really putting into true problem solving in ways that can create win-win scenarios. I just don’t see as much of that as I once did.

“We all stand on the shoulders of someone else’s ideas and knowledge, and none of us takes an idea and makes it happen by ourselves.”

IUW: Have you employed a common theory of leadership or management across the years?

Bazzell: Yeah, I have. You know, here’s the interesting thing. I didn’t develop my management or leadership by reading management leadership books. My style, good or bad, is one that was more natural. And if you look at my career trajectory, early in my career, even when I was in college, I was a clerical assistant, and spent time at almost every pay range in state government, from a paraprofessional to a professional to an executive level. Along the way, just like most other workers, you always imagine what you would do if you were in charge one day. And one day I woke up and I was in charge [laughs].

So having a reverence for those who do the work day-to-day, a very healthy respect, growing up with the belief that to accomplish good things you must work with and through others, my style just evolved very naturally. It certainly was later in my career I began to become more of a student of leadership and management theory. So for me, I always think about my style, at least from a leadership perspective, as being one of where my primary role as a leader is to help set a future direction for the organization. And obviously in this context you do that in concert with the chancellor and provost and other institutional leaders.

And you may find this surprising, but the second piece isn’t about the money. It’s about a different resource, the human resource. It’s getting the right people in the right roles to give the organization the best chance to be successful in moving forward.

And so when I think about once you get to the point where you’ve helped set that future direction, you try to create alignment around that, get the right people in the right roles, a lot of my job is problem-solving. … I have a deep respect for the deans and directors of this institution as the people who oftentimes run point for carrying out the breadth of the mission. And so I see my role as helping enable them and helping them problem-solve, where perhaps they’re not able to do it themselves.

IUW: How about central challenges and where we need to head next, things that need to be addressed?

Bazzell: At the end of the day, a lot of what we do revolves around resources and whether our budget is shrinking a little bit or whether we can find opportunities to grow it. The thing we always try to keep in mind is that we’re still a $3 billion dollar a year enterprise. That’s a significant amount of resources. It’s always our job to be great stewards of those resources — in other words, to make sure that we’re spending those dollars in the most efficient and effective way. Given the challenges in front of us, not just fiscal challenges but what we’re trying to accomplish in terms of our mission, I’d like to see us continue to push hard in finding ways to maximize the value of the resources we spend each year.

“That’s probably the thing I found most rewarding: that you can be collaborative and move the ball.”

IUW: The racial climate on campus has been in the news in the last week. How would you assess, through the lens of the time that you’ve been here, where we’ve been and how we feel like we’ve changed?

Bazzell: I think the thing for me that’s probably changed the most is that we talk about these issues more openly now. We recognize that racial challenges go beyond the occasional racial epithet that’s voiced. We recognize that for our students, staff and faculty to bring their whole self to this institution and give the best that they have, some of that goes to climate.

Those are more difficult issues to get at. We’re at a point in time now where at least we acknowledge that’s an issue. I think about my time here as a student; we didn’t really acknowledge that there were such things as climate issues.

We only reacted to very overt types of behaviors. And so the fact that now we’re more engaged in the more subtle things that really, in many respects, is more challenging but more meaningful in terms of moving things forward. The fact that we’re talking about those issues and trying to engage in strategies to address them, I find that encouraging.

IUW: Anything that you’re most proud of — I think I’d heard you say First Wave previously?

Bazzell: At its very core, probably the thing I feel most proud about, you know, in an institution that rewards most greatly individual accomplishment. For somebody to come into this type of environment that really believes in the power of the collective, where none of us does anything alone. We all stand on the shoulders of someone else’s ideas and knowledge, and none of us takes an idea and makes it happen by ourselves. And so the idea that I could come to a place like this and collaborate and work with others to move this agenda forward, that’s probably the thing I found most rewarding: that you can be collaborative and move the ball. That it’s not simply about individual accomplishment. That we can identify some things in common and move together in unison.

IUW: And any parting advice?

Bazzell: I guess the one thing I would say, and it goes back to something we just talked about a moment ago, is it’s easy in a difficult fiscal and political environment to become discouraged. And I wouldn’t fault anyone for being discouraged if that’s the way they truly feel.

Having said that, this is a great institution, and let’s always remember why we’re here. Whether it’s because of the teaching and learning mission, or it’s because of the opportunities for discovery, or the opportunities to share our knowledge with the broader community, let’s always try to stay focused on that. Because that’s not just what keeps us great, but those are things that are still readily available to us, and that’s why we’re here. And we should never lose sight of that.