Coming home: First Wave’s new director was transformed by the program as a student

Sofía Snow, a member of the 2007 inaugural cohort of UW–Madison’s groundbreaking First Wave hip-hop scholarship program, is returning to campus to lead the program she says changed her life.

Snow will begin Oct. 15 as director of the First Wave Hip Hop and Urban Arts Learning Community and the Office of Multicultural Arts Initiatives, which administers the program. She currently is executive director of Urban Word NYC. 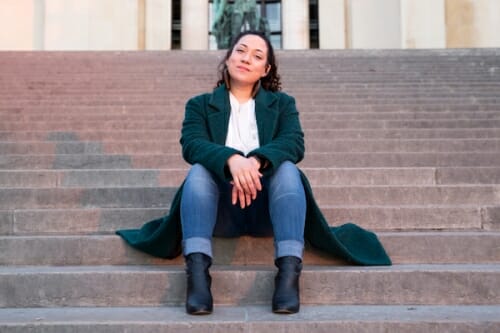 Of her return to UW–Madison this fall as director of First Wave, Sofía Snow says, “I want to take everything I’ve learned over the last few years and apply it to a community that gave me so much.”

“First Wave gave me the opportunity to become part of a really rigorous academic program at a time when I didn’t see myself that way,” says Snow, who earned a bachelor’s degree in social work from UW–Madison in 2014. “That’s why I’m coming back. I feel I owe it to this institution that took a chance on me.”

In just over a decade, First Wave has become a nationally prominent scholarship program known for pushing the boundaries of poetry, dance, theater and art. It is the first and only such program of its type in the country. Students pursue their creative potential through a focus on three pillars: academics, activism and art.

Snow was a teenager in Boston when Willie Ney, First Wave’s founding director, flew out to recruit her as one of 16 students in the first cohort in 2007-08. She’d already made a name for herself as the Massachusetts Spoken-Word Artist of the Year. Just 17 at the time, she beat adults for the title. A glowing profile in the Boston Globe followed.

Yet Snow didn’t necessarily see herself in higher education. As a teenager, she’d focused extensively on youth activism. She figured that after high school, one of the numerous nonprofit organizations she volunteered with would hire her.

Ney offered a new vision of her future — and won her over.

“He told me, ‘We need you to be part of this,’” Snow says. “And the way he described First Wave made college, for the first time, seem like a home to me. There would be this group of young people coming together with a drive and a mission to make art that truly meant something. I wanted to be a part of that.”

As a First Wave scholar, Snow remained focused on youth arts and education, but now with the resources, training and academic mentorship of a world-class institution behind her. “I cannot overstate how the doors this investment opened for me truly changed my life,” she says. 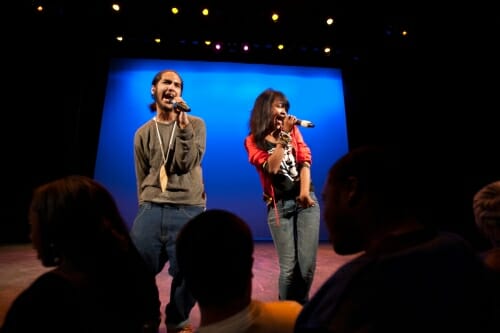 Ashlyn Elizabeth and Dakota Alcantra-Camancho, then undergraduates in the First Wave Spoken Word and Hip-Hop Arts Learning Community, perform a spoken-word piece during the Multicultural Orientation and Reception in 2010. Photo: Jeff Miller

After First Wave, Snow returned to Boston to work for youth nonprofits and Boston Public Schools. But soon, Ney reached out to her again, this time to hire her as education and outreach coordinator for the Office of Multicultural Arts Initiatives. In addition to First Wave, the office houses a suite of innovative programs, including the Hip Hop in the Heartland series of educator trainings, the annual Passing the Mic and Line Breaks festivals, and Madison’s longest-running all-age open mic event, called Just Bust! Back on the UW–Madison campus as an employee, Snow helped recruit students for future First Wave cohorts.

“I really sought young people who were involved and leaders in their communities,” she says. “It was important to seek top scholars, for sure, but I always kept an eye out for someone who just needed a chance, someone like me when I was that age. That’s part of my story, and it’s important that I share that.”

In 2015, Snow was offered a position at Urban Word NYC, one of the leading youth arts organizations in the country. As associate program director, she oversaw spoken-word residency programs in more than 100 New York City public schools. Three years later, she became the organization’s executive director.

Of her return to UW–Madison this fall, Snow says, “I want to take everything I’ve learned over the last few years and apply it to a community that gave me so much.”

She considers First Wave and similar programs part of the social justice work that needs to occur in this country.

“These programs level the playing field — that’s what First Wave did for me,” she says.

“I am beyond thrilled Sofía is coming back to UW–Madison to share her extensive expertise in nonprofit leadership and youth arts programming,” says Sims, deputy vice chancellor for diversity and inclusion. “As an alumna of the program, she is uniquely positioned to lead the program into the future.”

Snow says the skill set and tenacity she acquired through First Wave will serve her well as director. She hopes the program can give other young people what it gave her.

“Goosebumps when I first heard about it,” she says, “and a home once I got there.”