Separating the personal and professional anecdotes about Jim Baughman is a difficult task. From Friday “seminars” at his favorite campus watering hole to his staunch defense of academic freedom, “he was his own man,” says friend and colleague Donald Downs. “Isn’t that what a college education is supposed to instill?” 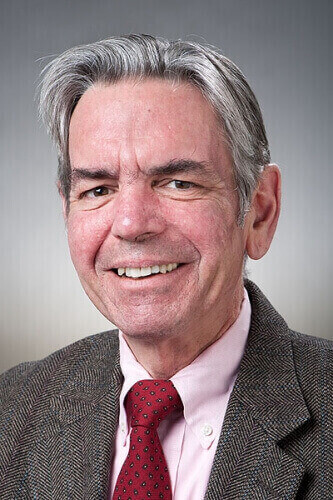 Baughman, Fetzer-Bascom Professor in the School of Journalism and Mass Communication at the University of Wisconsin–Madison, died of lung cancer on Saturday, March 26, in Madison. He was 64.

In addition to the tribute from his colleagues in the J-School, other notable remembrances included a Milwaukee Journal Sentinel obituary, a post from the Center for the History of Print and Digital Culture, and an outpouring on social media. (According to colleagues, Baughman, a historian of communication, had sent a single tweet in his career and steadfastly refused to own a cellphone.)

Many recalled Baughman’s advice following difficult or tragic events: “Write about it.”

I was the teaching assistant in Prof. Baughman’s popular undergraduate media history class during the early ’90s, where I learned much of what I needed to know about lecturing in a large classroom. One thing that impressed me was the degree to which he was the same on stage as he was in his office or in the Big Ten Pub after a baseball game (that the J-School probably lost). 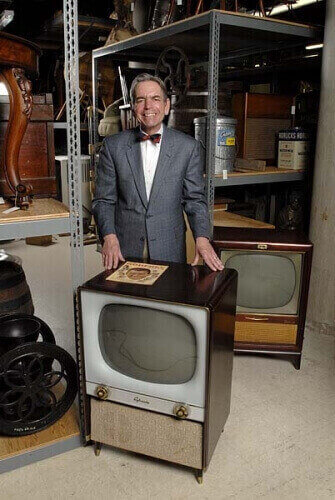 Baughman poses in 2007 with 1950s vintage television sets. He was an expert in Journalism history in 20th century and the beginnings of TV in America. Photo: Aaron Mayes

He loved to do impressions and imitations to spice up a lecture. One day he was imitating an Irish cop, which sounded exactly like the Swedish Chef on the Muppets. No one laughed louder than he did when it became obvious that the wrong accent had come out. But I bet there are still former students who know about the anomie suffered by new immigrants to big cities, and the sense of community that newspapers could help build — which was the real point of that lecture.

He’s the only teacher I’ve ever known who was beloved even by the students who were making C’s and D’s in his course. He held them to a high standard even while he showed that history could be fun.

Jim and I shared many students in our respective classes, and students constantly related to me what he had said in class, often involving an appropriately sarcastic comment about my views or those of other close colleagues. Naturally, I returned the favor, and over time we created a special pedagogical space based on this inter-student network. We often sent students to consult with the other. This was yet another way that Jim’s presence impacted my teaching in an interesting and original way.

As a lion of the J-School, Jim was a serious consumer of news and high-level journalism. For example, in his living room he proudly displayed each year’s supply of the New Yorker and the Economist on a beautiful wooden table in perfect chronological and physical order. One evening, I nudged the top magazine of each pile so it stuck out ever so slightly. “How long do you think it’ll take for him to notice?” I asked Jim’s beloved wife, Mickey. “A nanosecond,” she replied. Sure enough, Jim immediately spotted evidence of my crime, and restored order without further ado. After that, not a visit passed without my committing an act of recidivism.

In a sense, Jim was a buff, a delighted fan of old-time television. Though Jim’s own storytelling was as entertaining as the old shows themselves, his book Same Time, Same Station: Creating American Television, 1948–1961 is serious history. It is more than a painstaking recreation of early television; it is a brilliant critical history of the intersection of business, politics, technology, and what the early TV critic Gilbert Seldes called “the public arts.” This kind of cultural history – exemplified by his other books as well – is his legacy. No one has done the history of American television better than Jim Baughman.

Jim had this knack of making alumni feel that they were still as much a part of the UW J-School as when they were students. During my years as editor of The Cap Times, he’d often send me notes telling me what he liked about something new we were trying or, in rare cases, what he didn’t like.

My fondest memories with Jim, though, center around our mutual love for baseball. He was a die-hard Cleveland Indians fan. The past couple of years, while on my annual trip to spring training in Arizona, I’d bring him home an Indians yearbook and a jar of Cleveland’s famous Bertman Ball Park Mustard. I’m bringing them home again this year, if for nothing else than to remind me what a great teacher, journalist and friend Jim Baughman was to all of us.

[When I was] a journalism student, Prof. Baughman taught me the value of being curious, and that asking great questions is often times harder than giving good answers.

I was on the board of visitors of the J-School and served as its chair while Jim was director of the department. What struck me during that time is that he was always incredibly open to improving the experience for J-School students, even though he arguably wrote the book on how to teach, engage and inspire them.

#Baughman was a true historian. 24 years after I graduated, he came into my new office in Vilas with my J560 paper.

Today I lost a professor who changed my life, a colleague who enlightened it and a friend who brightened it. Godspeed, Jim #Baughman.

Note: Schwoch, who helped Baughman develop the syllabus for his Literary Aspects of Journalism course, will lead Baughman’s course for the remainder of the semester.