Jaimee Gilford, UW–Madison’s Clery Act compliance director, has been hired to lead the University of Wisconsin–Madison’s Office of Compliance, replacing Cathleen Trueba, who will retire after 32 years of service at the university. 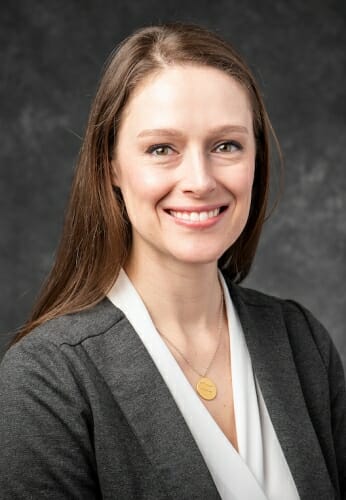 Gilford has worked as UW–Madison’s director of Clery Act compliance since 2014. She also serves as a deputy Title IX coordinator. As the first person to serve as the university’s Clery director, Gilford created an enterprise-wide Clery Act compliance program. The Clery Act consists of and overlaps with several federal laws, including the Drug-Free Schools and Communities Act, the Violence Against Women Act, the Higher Education Opportunity Act and Title IX.

Vice Chancellor for Legal Affairs Raymond Taffora says Gilford’s wealth of experience will benefit her in her new role and notes that in her current role she has already been a key partner with the Office of Compliance.

“Jaimee has experience working across our campus to coordinate Clery compliance and has been a major contributor to the safety mission of UW–Madison,” Taffora says. “She has had tremendous success building the Clery program on campus, is highly regarded, and will be a tremendous asset to the Office of Compliance.”

Gilford, who will join the Office of Compliance on May 20, has a juris doctor from the Syracuse University College of Law, and graduated from the University of Colorado Boulder with a bachelor’s degree in political science and sociology. She looks forward to collaborating with stakeholders across campus.

“Compliance, as both a foundational and aspirational principle, protects our institution and its people. My years of experience as a compliance director, with all its challenges and achievements, have borne the firm belief that compliance cannot be achieved without collaboration, trust and shared vision,” Gilford says.

Trueba was the first director of the Office of Compliance, which was established in 2016, and previously worked as director of the McBurney Disability Resource Center. Taffora praised Trueba’s contributions to the campus community.

“Cathy has had a remarkably distinguished career at UW–Madison, and has made a profound contribution to the campus,” Taffora says. “She has been the principal reason the Office of Compliance has enjoyed the success it does today.”

The Office of Compliance reports to the vice chancellor for legal affairs. Duties of the position include supervising university compliance with the requirements of the Americans with Disabilities Act, Title IX, the Wisconsin Public Records Law and the Health Insurance Portability and Accountability Act (commonly known as HIPAA), and to coordinate and support the university’s existing compliance units.