In the future, treating a concussion could be as simple as cooling the brain.

That’s according to research conducted by University of Wisconsin–Madison engineers, whose findings support the treatment approach at the cellular level.

“There are currently no effective medical treatments for concussions and other types of traumatic brain injuries,” says Christian Franck, the UW–Madison associate professor of mechanical engineering who led the study. “We’re very excited about our findings because they could potentially pave the way for treatments we can offer patients.” 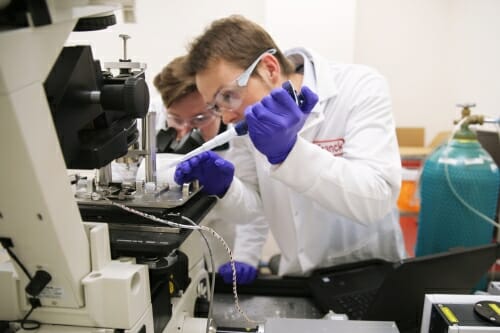 Associate Professor Christian Franck, at right, and graduate student Harry Cramer prepare an experiment to deliver a concussive impact to a network of cells in a dish. The experiment simulates the kind of injury and cell damage that people experience with a concussion. Photo: Kristen Koenig

The process is a bit more finicky than just applying an ice pack to the head.

Conducting experiments on brain cells in a dish, Franck and his team discovered several key parameters that determined the effectiveness of therapeutic cooling for mitigating damage to the injured cells.

And when the researchers identified that sweet spot, the results were striking.

“I was amazed at how well the cooling worked,” Franck says. “We actually went back and repeated the experiments multiple times because I didn’t believe it at first.”

The researchers published their findings in the journal PLOS ONE.

The high occurrence of concussions underscores the pressing need for treatments. Every year in the United States, there are an estimated 1.7 million new cases of traumatic brain injury assessed in emergency rooms, and the incidence of sports-related concussions may approach 3.8 million annually. 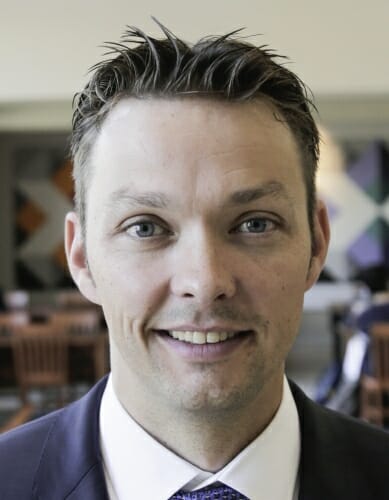 A traumatic impact to the brain can turn on biochemical pathways that lead to neurodegeneration, the progressive deterioration and loss of function in brain cells. Neurodegeneration causes long-lasting and potentially devastating health issues for patients.

“These pathways are like flipping on a bad molecular switch in your brain,” says Franck.

In their experiments, the researchers looked at two of those biochemical pathways.

First, they created a network of neurons in a dish and delivered a mechanical stimulus that simulates the kind of injury and cell damage that people experience with a concussion.

Then they cooled the injured cells separately to four different temperatures. They found that 33 degrees Celsius (91.4 degrees Fahrenheit) provided the most protective benefit for the cells after 24 and 48 hours post-injury. Notably, cooling to 31 degrees Celsius had a detrimental effect.

“So there’s such a thing as cooling too much,” Franck says. 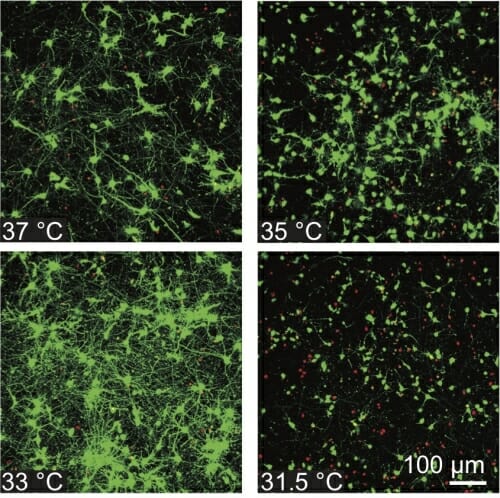 Time also is a factor. For the best outcome, the team determined that cooling needed to begin within four hours of the injury and continue for at least six hours, although Franck says cooling for even 30 minutes still showed some benefits.

When they adhered to those parameters, the researchers discovered they could keep the cells’ damaging biochemical pathways switched off. In other words, the cells remained healthy and functioning normally—even though they had just suffered a traumatic injury.

After six hours of cooling, the researchers brought the concussed brain cells back up to normal body temperature, curious about whether warming would cause the damaging biochemical pathways to turn on.

“The biggest surprise was that the molecular switches actually stayed off — permanently — through the duration of the lab experiment,” Franck says. “That was huge.” 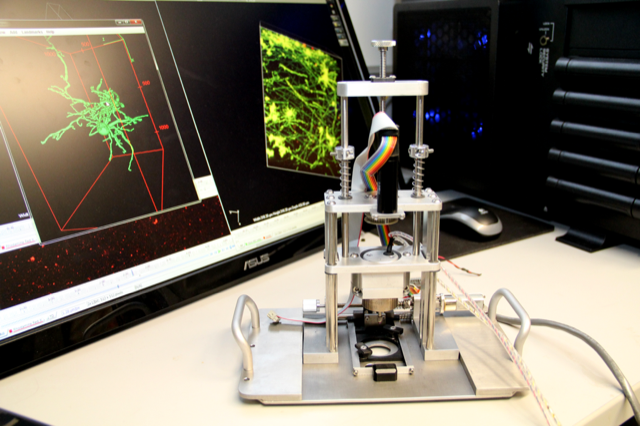 The impact delivered to a dish of cells by this device simulates the kind of injury and cell damage people experience with a concussion. Photo: Kristen Koenig

He and his students compared their results with previous animal studies and randomized human trials that investigated cooling as a treatment for traumatic brain injuries.

“We found really good agreement between the studies when we dialed in to those specific parameters, so that’s a very encouraging sign,” Franck says. “But this isn’t the end of the story. We think this warrants further investigation in animal studies.”

Franck says there’s more to learn before cooling the brain could be a practical treatment for patients at a clinic. For example, it’s not as easy as simply lowering the temperature of a person’s whole body, which taxes the heart and can have a strong negative effect on the immune system.

Rather, isolating cooling to the brain is crucial. “We hope our paper will spawn renewed motivation and interest in solving the technical challenges for getting this type of treatment to patients in the future,” Franck says. “For a long time, the scientific literature was inconclusive on whether this would be a successful treatment. What we showed in our study was that, yes, as far as the cell biology is concerned, this is effective. And so now it’s really worth thinking about how we might implement this in practice.”

Researchers from Brown University collaborated on this research through the U.S. Office of Naval Research-sponsored PANTHER interdisciplinary research program at UW–Madison for studying traumatic brain injuries. Franck is the Grainger Institute for Engineering Associate Professor and PANTHER director.