The leader of UW–Madison’s diversity and inclusion efforts is departing for an opportunity at another institution.

Chief Diversity Officer and Deputy Vice Chancellor for Diversity and Inclusion Patrick Sims will depart later this summer to become the executive vice chancellor and provost at the University of North Carolina School of the Arts, a top-ranked creative and performing arts conservatory in Winston-Salem, N.C.

An interim successor is expected to be named in the near future. 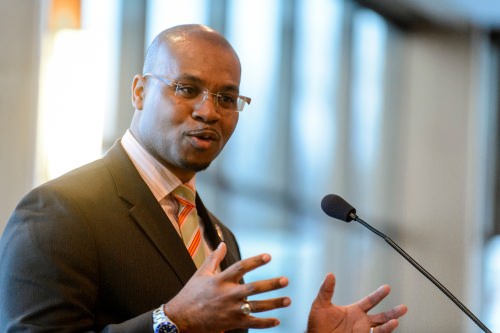 Sims has served as UW–Madison’s chief diversity officer since 2013, first on an interim basis and then permanently since May 2015 when he was named vice provost for diversity & climate. He was later promoted in 2018 to the role of deputy vice chancellor, when he was named the inaugural Elzie Higginbottom Vice Provost and Chief Diversity Officer, the first endowed CDO position in the nation.

“We have worked hard and successfully over these last seven years to help make UW a better place,” Sims says. “Although this work is never finished, I will miss the many talented and committed colleagues and programs that are making a difference in the lives of our community.”

“I am also grateful for and humbled by the opportunity to join one of the nation’s premier performing arts conservatories at this critical time in our nation’s history,” he adds. “I look forward to highlighting the vital role the arts can play in our society and their impact on our sense of humanity.”

“Patrick has made a major impact on our community and we will miss him deeply, but I understand that this is a career opportunity he can’t turn down,” says Chancellor Rebecca Blank. “We know there is much more to be done to increase the diversity of our university community and to make those who are here feel more welcome and included.  Patrick has been an important leader in these efforts. Our commitment is strong and will continue.”

“Patrick is a wonderful communicator, and clear, effective communication is critical in driving change,” adds Provost Karl Scholz. “Patrick has made our campus and our community a better place. We are enormously grateful for his many contributions to campus. We will miss him greatly and wish him the best in his new position as provost at the North Carolina School of the Arts.”

Sims joined the UW–Madison faculty in 2004 as a professor in the Department of Theatre & Drama. He developed the Theatre for Cultural and Social Awareness interactive training model that dramatizes sensitive subject matters for universities, corporations and nonprofit organizations.

In addition to oversight for institution-wide diversity efforts, Sims oversaw the Division of Diversity, Equity & Educational Achievement (DDEEA), which includes programs like the PEOPLE Program, Posse Scholars (of which UW is the largest partner institution), the Center for Educational Opportunity, McNair Scholars Program and the First Wave Program, the first scholarship program of its kind in the country to emphasize the aesthetics of hip hop as the foundation for scholarly engagement.

Under Sims’ leadership, DDEEA has received additional philanthropic support for the scholarships resulting in the Chancellor’s and Powers-Knapp scholarships being renamed the Mercile J. Lee Scholars Program through a multi-million dollar gift.

His accomplishments as deputy vice chancellor include growing attendance at the annual Fall Diversity Forum to 1,300 participants, implementing the university’s first-ever campus climate survey for students as a result of the R.E.E.L. Change Implementation Plan, and developing an institutional statement that codifies the campus commitment to diversity and inclusion.

He led efforts to revamp the Office of Equity and Diversity to create the offices of Affirmative Action Planning and Programs and Employee Disability Resources within DDEEA.  Additionally, he and his team launched the Learning Communities for Institutional Change and Excellence (LCICE) and the PEOPLE Program office in Milwaukee to better serve high school students outside of Dane County.

He also participated in important efforts such as the campus unity messaging campaign #IamUW, the Target of Opportunity Program hiring effort in partnership with the Vice Provost for Faculty and Staff, and the Diversity Liaisons Project.

“I’ve appreciated the commitment of Chancellor Blank and the senior leadership through UW to working on these issues and know they will continue to expand these efforts,” Sims adds.

In a separate announcement, Sherri Ann Charleston, assistant vice provost and chief affirmative action officer, has accepted a new position as chief diversity and inclusion officer for Harvard University. Her last day at UW–Madison will be in July.