Cheers despite the chill at UW-Madison Commencement Saturday 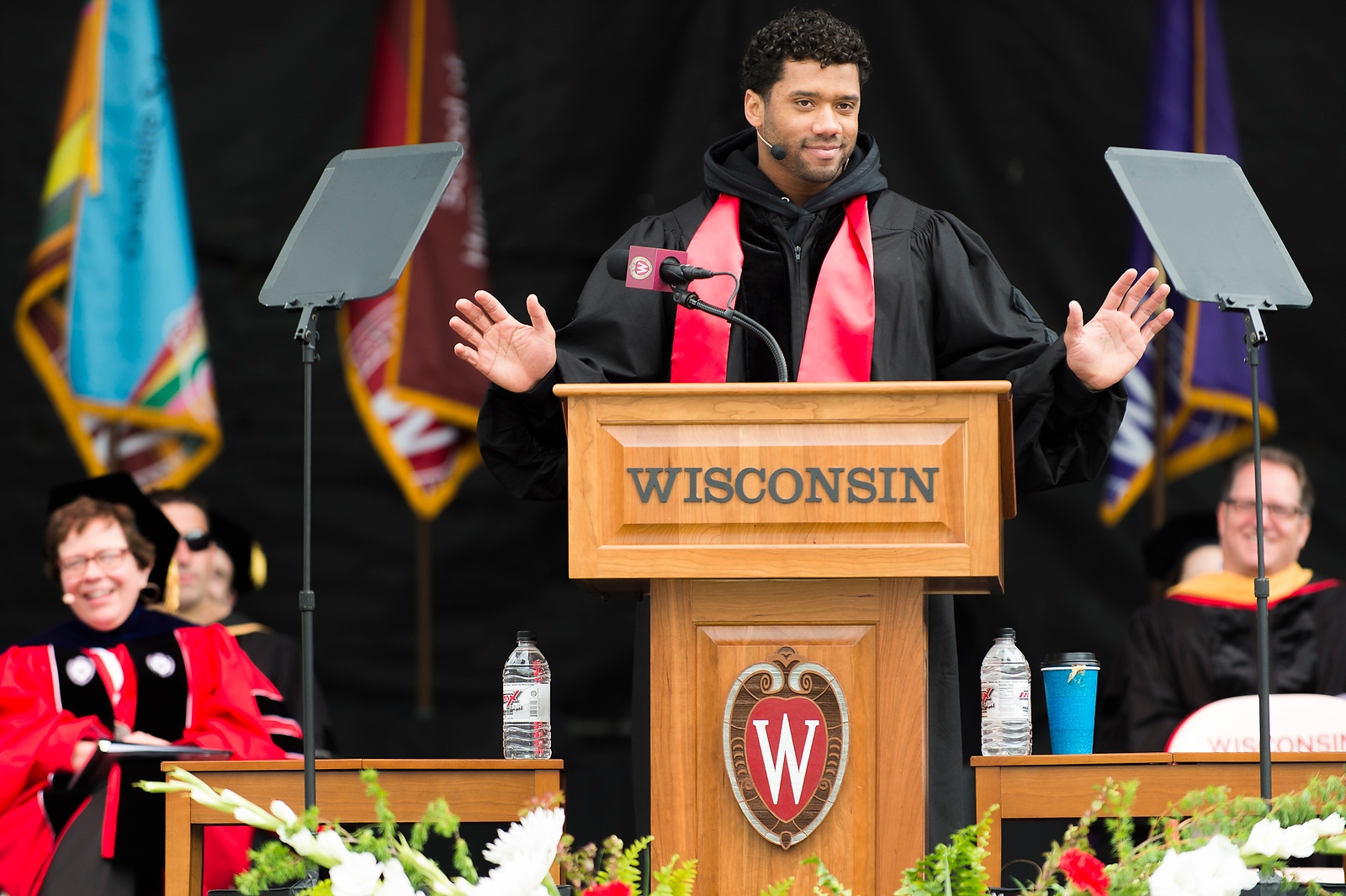 “I’ve seen that lots of people have potential, but not everyone does it.,” said speaker Russell Wilson. “I’ve learned that the difference isn’t the way people handle themselves when things go well. … The moments that really matter are the moments when life tells you no.” Photo: Jeff Miller

Commencement day at the University of Wisconsin–Madison dawned with a brisk wind through Camp Randall Stadium. More than a few mittens accompanied the caps and gowns.

And then it started snowing during former Badger quarterback Russell Wilson’s speech.

But most of the proud families and friends in the stands – 47,521 in all  – stayed put, warmed by the excitement of graduation (and, yes, extra blankets). By the time “Jump Around” started, dozens of graduates who had escaped to get hot coffee streamed back down the ramp to join their classmates in a final exuberant celebration.

“Spring is the time of year when you can get sunburn and frostbite in the same weekend,” said Provost Sarah Mangelsdorf, welcoming the crowd. “Hopefully that’s not in store for you.”

Chancellor Rebecca Blank reflected on some of the milestones of the Class of 2016’s time at the university. 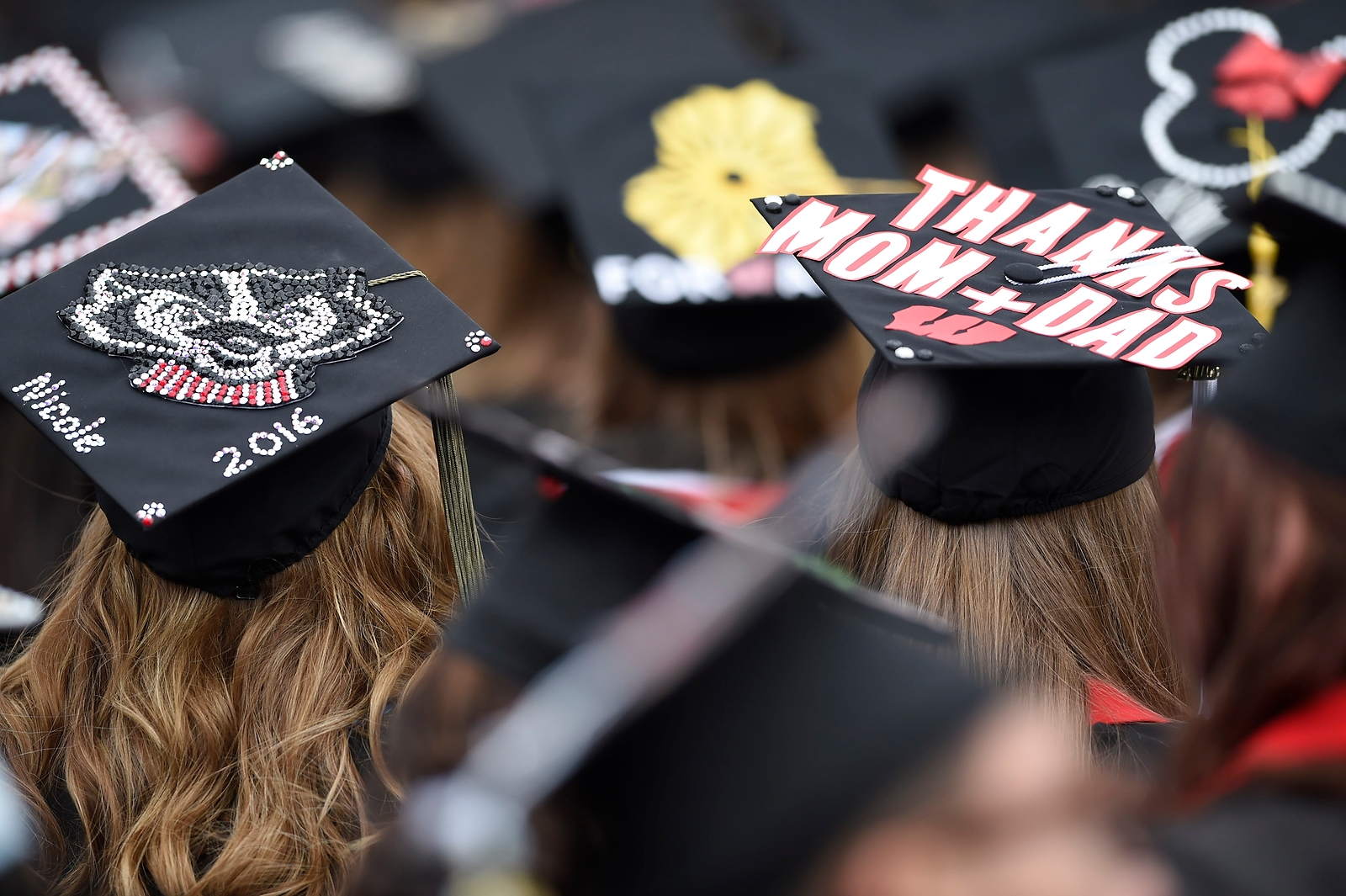 Caps at Commencement displayed a full range of artistic expression – Harry Potter references, puns, and classics like this one. Photo: Jeff Miller

Blank also noted how students had engaged in the proud tradition of social activism on campus.

“A number of you have been deeply involved in a lively debate on our campus about campus climate – a debate that’s happening here and around the country,” said Blank.  “With your help, we’re engaging in some of the most difficult discussions about ethnicity, race and inclusion in a generation.  And these discussions are creating an opportunity for real change on campus.”

Graduate Diana Macias appreciated the mention. Macias, a zoology major who’s headed to graduate school in ecology, was one of dozens of students whose mortarboards held a message. Her cap bloomed nearly a foot high with grasses, flowers and, in a salute to immigrants everywhere, a monarch butterfly.

Other caps displayed a full range of artistic expression. Harry Potter references: “Life begins at the close.” Puns: a biochemist with a glittery test instrument and the words “Just like this cylinder, I’m graduated.” The classics: “Thanks, Mom and Dad.”

“We often think about heroes in life. What we don’t always think about are the moments that made them who they were – when no one was looking, but they made themselves just a little bit better anyway. When they came up short but didn’t quit.” – Russell Wilson

Student speaker Bhupinder Manhani encouraged his classmates to focus on contributions they can make with the help of their UW–Madison education.

“You’ve already heard plenty about the Wisconsin Idea,” said Manhani. “At many graduation ceremonies, something is said about trying to change the world. For us, it isn’t just a suggestion; it is a responsibility. It’s our pledge to the state, nation, and the world, that our endeavors will benefit all citizens – and many of us have already begun shouldering this responsibility.”

Wilson, the Super Bowl-winning quarterback of the Seattle Seahawks who spent a heralded year leading the Badger football team, focused on what to do when life tells you no. He spoke of students who faced hardships during their time at the university, but persevered.

“We often think about heroes in life,” said Wilson. “What we don’t always think about are the moments that made them who they were – when no one was looking, but they made themselves just a little bit better anyway. When they came up short but didn’t quit.”

In the end, the ceremony boasted plenty of bright spots. The crowd roared as Anna Whiteway, a vocal performance graduate, soared to the peak of the “Star-Spangled Banner.” The sun came out, drawing another cheer, during remarks by Regina Millner, president of the Board of Regents.

MBA graduate Pramod Allani didn’t have a cheering section in the stands. Thanks to a FaceTime video connection, though, his wife could join him from Hyderabad, India, where she was taking care of an ailing relative.

“This is one of the best things in my life,” said Allani, who sat just a few feet from the stage. “The atmosphere, the culture, especially my class of 2016. This is my first time at a ceremony like this, and it’s awesome. I feel it’s my most deserved because we went through a lot in these last two years, but it’s worth it.”

Near the end of the ceremony, the day warmed, as the chancellor and the deans granted bachelor’s degrees. The wind calmed; the clouds lifted and spirits swelled.

As one graduate walked up the ramp from the field, a friend shouted to him from the stands. “I see you, kid!”

The young man grinned, raising his fist in a proud salute.