University of Wisconsin–Madison Chancellor Rebecca Blank has been named a 2021 Distinguished Fellow by the American Economic Association, one of four economists to receive the honor this year.

The AEA Award of Distinguished Fellow was established in 1965 to recognize the lifetime research contributions of distinguished economists from the United States and Canada. Distinguished Fellows are selected by the AEA Nominating Committee and voting members of the Executive Committee. Past AEA distinguished fellows include several recipients of the Nobel Prize for Economic Sciences. A list of economists who have received the recognition can be found at aeaweb.org/about-aea/honors-awards/distinguished-fellows.

“It is a tremendous honor to receive this recognition from my colleagues in economics,” Blank says. 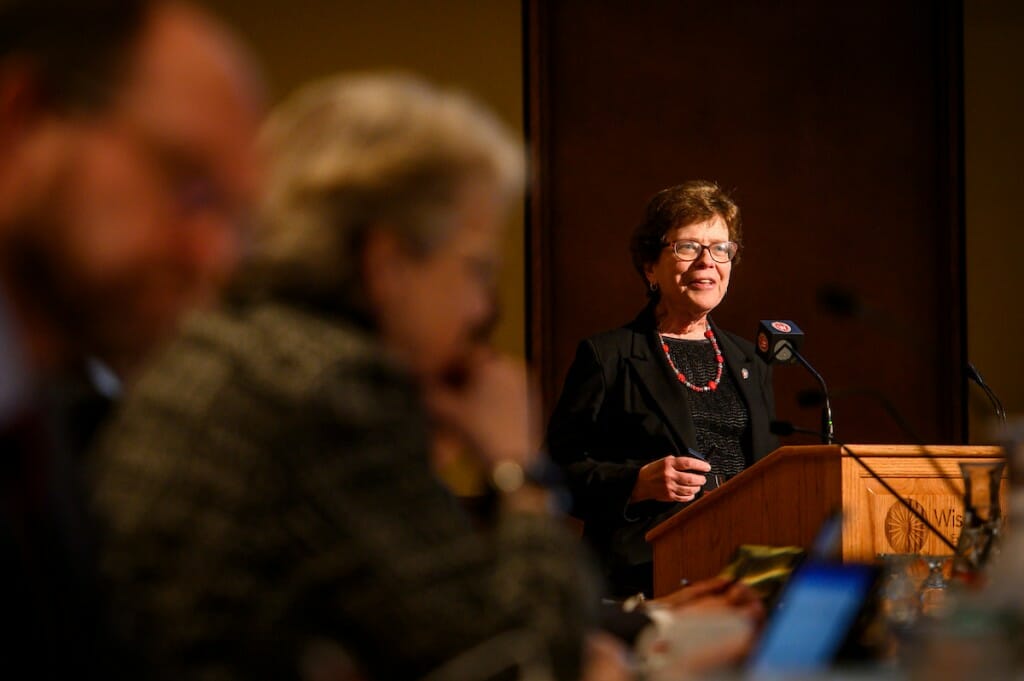 AEA cited Blank’s important contributions to economic scholarship. A labor economist, Blank “has conducted significant research in the study of labor supply, unemployment, the role of gender and race in labor markets, and inequality more broadly. She is particularly well known for seminal research on poverty, including many insightful analyses of public policies designed to reduce poverty or ameliorate the impact of poverty.”

Prior to coming to UW–Madison, Blank served as a member of the Council of Economic Advisors in the Clinton Administration, and under secretary for economic affairs and then deputy secretary in the Department of Commerce in the Obama Administration. She’s also served as co-director of the Northwestern/University of Chicago Interdisciplinary Training Program in Poverty, Race, and Underclass Issues; dean of the Gerald R. Ford School of Public Policy at the University of Michigan; and co-director of the National Poverty Center. In her current role as UW–Madison chancellor, she is a member the board of governors of the National Collegiate Athletic Association. Blank has a BS in economics from the University of Minnesota and a PhD in economics from MIT.

Established in 1885, the AEA is a nonprofit, nonpartisan scholarly association dedicated to the discussion and publication of economics research, with more than 20,000 members from academics, business, government and consulting groups within diverse disciplines from multicultural backgrounds. All are professionals or graduate-level students dedicated to economics research and teaching. The association encourages economic research, issues publications on economic subjects, and encourages perfect freedom of economic discussion.