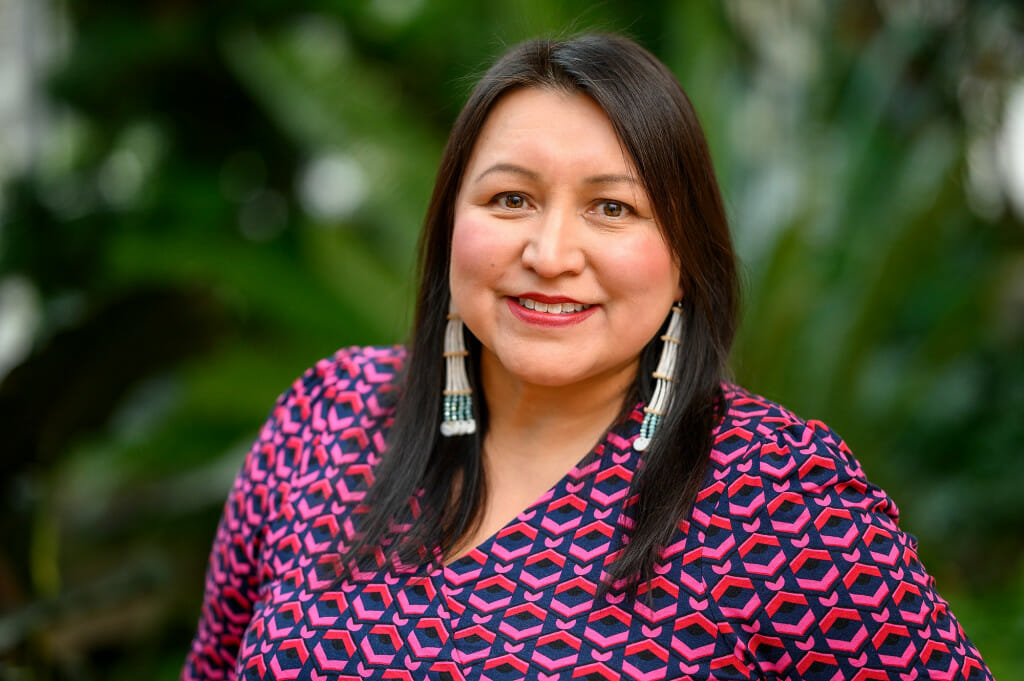 Carla Vigue, a member of the Oneida Nation of Wisconsin, brings two decades of community affairs and outreach experience to her new role as tribal relations director for the University of Wisconsin–Madison. Photo: Althea Dotzour

Carla Vigue, a community affairs and outreach professional with more than two decades of experience, has been named director of tribal relations at the University of Wisconsin–Madison.

Vigue (VEE-joo), a member of the Oneida Nation of Wisconsin, is currently director of communications, events and community engagement for the National Council of Urban Indian Health in Washington, D.C. Prior to that, she served for more than a decade as communications director for the Wisconsin Department of Veterans Affairs, where she developed and implemented a statewide strategy for engaging tribal veterans.

Vigue also has held positions with the National Indian Gaming Association, the Wisconsin Department of Administration and the Office of the Governor.

“Carla’s background and skills are a perfect fit for strengthening our existing partnerships with the First Nations of Wisconsin and developing new ones,” says Ben Miller, the university’s assistant vice chancellor for government affairs and strategic partnerships. “This work is a high priority for us, and I’m excited to see how Carla’s knowledge of diverse communities and her extensive experience collaborating with tribes both nationally and in Wisconsin will build on the strong foundation Aaron has put in place.”

The director of tribal relations works to foster strong ties with the 12 First Nations of Wisconsin and leads initiatives, strategic engagement opportunities and special projects with tribal nations and affiliated organizations on behalf of the university.

She began her career at PACE-Capstone, a D.C.-area government relations firm, where she developed lobbying and political strategy related to Native American issues. She next worked as director of media and public relations for the National Indian Gaming Association. When people hear the name of the association, they immediately think of casinos, Vigue says, but it’s so much more.

“It’s all about opportunity — the opportunity to build a new health clinic or a new school or a new community center,” she says. “This mindset was instilled in me growing up: community service, public service, giving back.”

In the mid-2000s, Vigue returned to Wisconsin and began a long association with state government, including serving in both Democratic and Republican administrations. At the Department of Health and Family Services, she served first as a liaison with tribal governments and later led the communications effort for the launch of BadgerCare Plus, an initiative to ensure that all children in the state have access to affordable childcare.

In 2006, Vigue was tapped to join the Office of Gov. Jim Doyle. She began as a deputy press secretary, worked her way up and eventually became communications director. Vigue says it was especially satisfying to work directly with Gov. Doyle on engaging tribal governments in his decisions and accompanying him on visits with elected tribal officials.

At the Department of Veterans Affairs, Vigue served as an appointee in the administrations of both Republican Gov. Scott Walker and Democratic Gov. Tony Evers. At the National Council of Urban Indian Health, she has served as a member of the senior leadership team, working to ensure that all Native people have access to health care regardless of where they live.

Vigue says the position of director of tribal relations at UW–Madison appeals to her in part because of the crucial role higher education has played in her life.

“Throughout my career, but especially now, I often think about all the opportunities education has afforded me and the encouragement I’ve received from people — especially tribal leaders — over the years and how powerful that’s been,” she says.

Tribal leaders will expect her to deliver tangible, practical results, Vigue says, and that’s as it should be.

“Tribes dislike when a position like this is ceremonial and not functional,” she says. “To have this position based at Bascom Hall, where the decision-makers are, is important to them, and to me. We are ensuring tribes have a voice at the table and are committed to  building strong relationships as a means for tribal communities to create opportunity for the next seven generations.”

Vigue lives on Madison’s east side with her husband, Brian, the director of freshwater policy for Audubon Great Lakes, and their two sons, Hunter, 10, and Otto, 7. Her boys, Vigue says, are very excited that their mom will now have even easier access to Babcock Ice Cream.