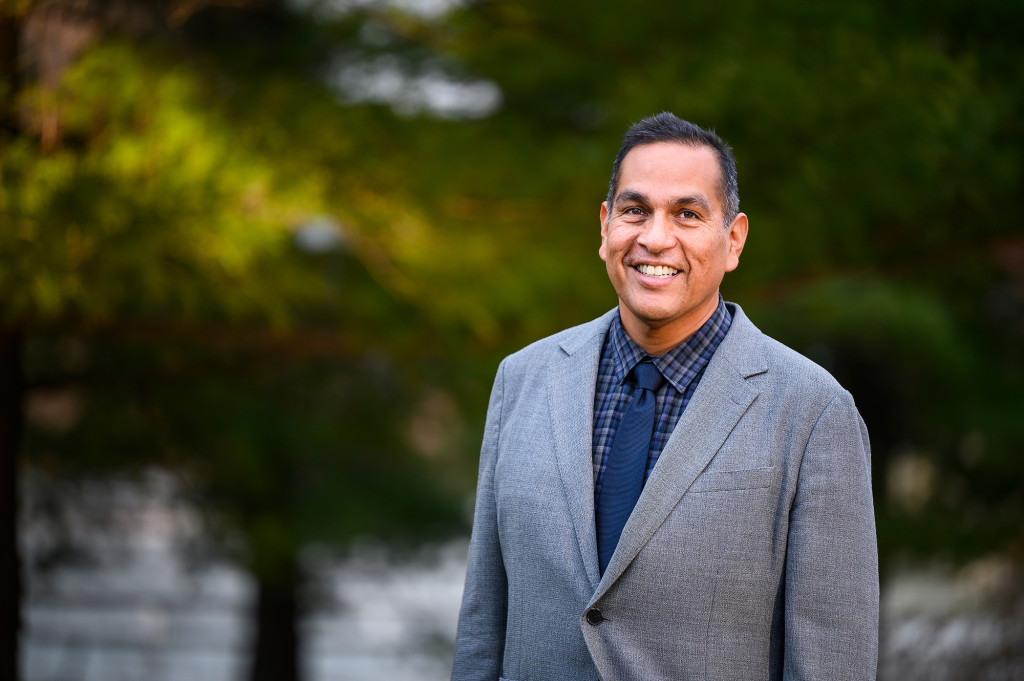 For over 20 years, Aaron Bird Bear has worked to improve the campus climate for Native students and to reshape UW–Madison’s relationship with the Indigenous heritage of its campus — land inhabited for 12,000 years and which the Ho-Chunk people call Teejop — and the tribal nations of Wisconsin. He plans to retire Jan. 1, 2023. Photo: Althea Dotzour

Shortly after arriving at UW–Madison as a new staff member in 2000, Aaron Bird Bear identified a problem — one, he says, that shocked him.

Bird Bear set out to change that. During his nearly 23 years on campus, he has made it his goal to push the university toward acknowledging, embracing and celebrating the full 12,000-year human story of the land the institution occupies.

The campus is part of the ancestral home of the Ho-Chunk people, land they were forced to cede to the United States through a violence-backed 1832 treaty. The Ho-Chunk call the land Teejop (Dejope, or Four Lakes).

As Bird Bear prepares to retire Jan. 1, his legacy can be seen across campus, from the popular First Nations Cultural Landscape Tour to improved recruitment, retention and graduation rates for American Indian and Alaska Native students. He helped shape the thematic elements of Dejope Residence Hall, lent his expertise to the Our Shared Future initiative and served for many years as a crucial member and co-leader of the Native Nations UW Working Group. Since 2019, he has led collaborative efforts with the Native Nations of Wisconsin as the university’s inaugural tribal relations director.

“Aaron has had a profound effect on this university, changing the way we understand our campus,” Provost Karl Scholz says. “He’s a highly respected person here because of his excellence, his commitment to Native people and his work to improve this institution and help it achieve its mission.”

Bird Bear is a citizen of the Mandan, Hidatsa and Diné nations and is enrolled in the Three Affiliated Tribes of the Fort Berthold Reservation in North Dakota. He was born in Hanover, New Hampshire, and lived in numerous states growing up.

He earned a bachelor’s degree in physical oceanography from the University of Washington in 1995, then was hired by UW–Madison five years later as the American Indian student academic services coordinator in the College of Letters & Science. 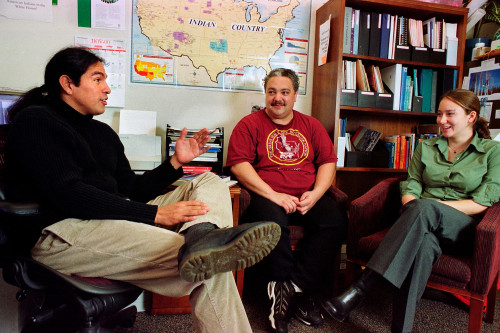 Aaron Bird Bear (left) joined UW–Madison in 2000 as the American Indian student academic services coordinator in the College of Letters & Science. Over the course of eight years in that role, he worked to improve the campus experience for Native students. Stephanie Judge

Janice Rice, an emerita librarian who worked at College Library in 2000, served on the search and screen committee that brought Bird Bear to UW–Madison.

“He was so full of energy and excitement and showed so much promise for what we wanted to achieve on campus,” says Rice, who is Ho-Chunk. “I don’t know how else to describe it other than that he was that bright light we needed on campus.”

Bird Bear spent the next eight years supporting the academic, cultural and social needs of American Indian, Alaska Native and Native Hawaiian students. He sought ways to improve the campus experience for them, such as helping to coordinate the proposal process for the American Indian Student & Cultural Center, which opened in 2009 and is now called the Indigenous Student Center.

Along with Ada Deer, he reactivated and co-taught American Indian Studies 150 and 151, courses that introduce students to current American Indian issues. At one of these classes, Deer invited Daniel Einstein to give a guest lecture. Einstein, the campus historic and cultural resources manager at the time, took the class on a walking tour of some of the campus sites with Native history, including the Ho-Chunk effigy mounds on Observatory Drive.

“I was astounded,” Bird Bear recalls. “I didn’t know that all of this history was here.”

Bird Bear took what Einstein had taught him, expanded on it, and stitched together a walking tour that “would lift the colonial veneer that obscures the Indigeneity of this space,” he says.

The result was the First Nations Cultural Landscape Tour, which introduces people to the First Nations of Wisconsin through place-based, experiential learning. Bird Bear began giving tours in 2003 simply as a retention tool for Indigenous students. Word spread, and demand snowballed. Today, Bird Bear estimates that he and co-tour leader Omar Poler have given the tour to 10,000 to 15,000 people. The tour has become part of the fabric of campus, especially for teachers-in-training and faculty and staff members seeking professional development. 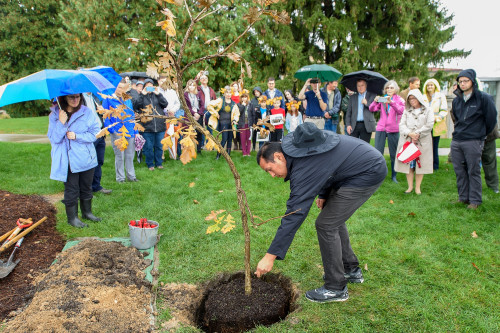 During a ceremony for the planting of a new President’s Oak in 2018, Aaron Bird Bear makes an offering of tobacco leaves. Photo: Bryce Richter

It’s a remarkable outcome for an idea Bird Bear says he never officially pitched to anyone. He credits then-Chancellor John Wiley with giving him the confidence to launch the tour.

“He told me, ‘Women and minorities too often wait for approval to do something. That’s not how this place works. Just go do something and tell me when it works.’”

So that’s what Bird Bear did. “I didn’t ask anyone’s permission,” he says. “I just started giving tours.”

In 2009, Bird Bear began a long affiliation with the School of Education that led to his appointment as assistant dean of Student Diversity Programs in 2015. Along the way, he earned a master’s degree in educational leadership and policy analysis from the school.

In 2019, as the university’s first director of tribal relations, Bird Bear began leading strategic engagement opportunities and special projects with the Native Nations of Wisconsin, serving as the primary contact and resource on behalf of campus leadership. Bird Bear’s successor is expected to be named in the coming weeks. 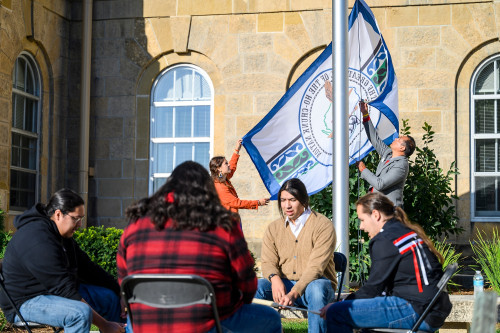 Members of the Madtown Singers perform in a drum circle as Aaron Bird Bear (back right) and Sagen Quale, a UW senior and president of Wunk Sheek, raise the Ho-Chunk Nation flag over Bascom Hall in honor of Indigenous Peoples Day on Oct. 10, 2022. Photo: Althea Dotzour

Einstein calls Bird Bear “the right guy, in the right place, at the right time.”

“Aaron’s role on campus has been a combination of advocate, diplomat and liaison — deftly navigating the sometimes-fraught relationships between the Native Nations and the university,” Einstein says. “His natural humor and openness have been a real asset to drawing people together and moving us forward.” 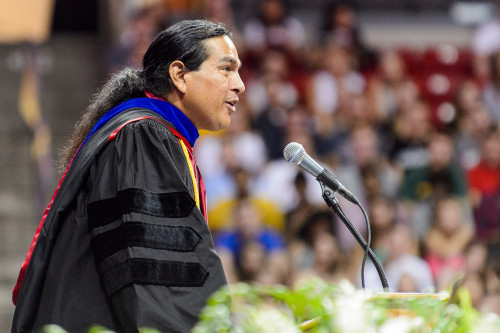 Aaron Bird Bear, while serving as interim assistant dean of Student Diversity Programs in the School of Education, speaks to thousands of first-year students during the Chancellor’s Convocation in 2015. Photo: Bryce Richter

Throughout Bird Bear’s various roles on campus, he has kept a strong focus on helping students, says Poler, who credits Bird Bear with helping him succeed at UW–Madison after a difficult first semester as a transfer student in 2005.

“That was the first time I met him, at that crucial moment when I needed help on how to survive here,” says Poler, who is now the Indigenous education coordinator with the Office of the Provost. “I think many people have those types of stories with Aaron. He’s had such a broad impact on campus and touched so many people’s lives. He’s a beloved person and really the center of the Native community here.”

At 51, Bird Bear is retiring at an age that some might consider young. Asked about this, he pulls out his phone and calls up a website with a chart showing the current life expectancy rates for those with his tribal affiliation: women 60, men 53.

“Most people don’t realize that Indigenous people of the Plains live really short lives,” says Bird Bear, who attributes some of the short life expectancy to the vestiges of colonialism. “People think I’m young. I am old in my tribe. I’m at the end. Statistically, there is a high probability that I will not live into my 60s.”

With this knowledge, Bird Bear says he is intent on doing things in his 50s that others might put off until their 70s or 80s. His wife, Marianne Bird Bear, an associate dean in the university’s International Division, will be taking a leave on Jan. 1, then retiring. She has worked at UW–Madison since 1994 and has left her own impressive legacy, founding both the King-Morgridge Scholars Program and the International Internship Program.

Aaron Bird Bear says he intends to devote the years ahead to surfing, an activity with Indigenous roots and one that harkens back to the 25 years he spent as “a diehard snowboarder.” After earning his undergraduate degree and before coming to UW, he moved to Colorado for three years to indulge his love of the sport. He funded the move with money he made from starring in a Surge soda commercial. (Yes, that’s really him!)

As for his legacy at UW–Madison, Bird Bear says he hopes he’s helped move the university closer to the day when every public-facing reference to the campus and its land will include the phrase “inhabited for 12,000 years.”

“That would be a huge victory because it would acknowledge the full human story of this land, not just the 1.5 percent that is the colonizing story,” he says.

The university isn’t there yet, Bird Bear says, but he sees encouraging signs, such as the Our Shared Future Initiative, the Ho-Chunk Nation flag-raisings and the development of Dejope Residence Hall.

“These are tangible steppingstones along the way,” he says. “We’re starting to see what it really means when you embrace the full human story of this space.”