NAMA is a student organization on campus, but also a class for students to take in the spring semester. The class is centered around creating a marketing plan for an agriculture-related product that is not yet on the market and preparing the plan and a 20-minute presenation for competition. This year the students’ product was GoodLife, a ready-to-drink, protein-enhanced, thickened wine that they marketed to people with a swallowing disorder.

The competition took place in Kansas City, Mo. where 30 teams from across the United States and Canada competed for the National Championship title.

This year the UW–Madison team was made up of 22 students ranging from freshman to seniors and was led by the marketing team coordinator, Alison Wedig, a senior studying Life Sciences Communication, Life Sciences Communication Faculty Associate and Advisor, Sarah Botham. The students worked together in small groups leading up to the competition, each group completing a specific aspect of the final marketing plan, including  market- and competitive analysis, business proposition, action plan, financials and monitoring and measuring. 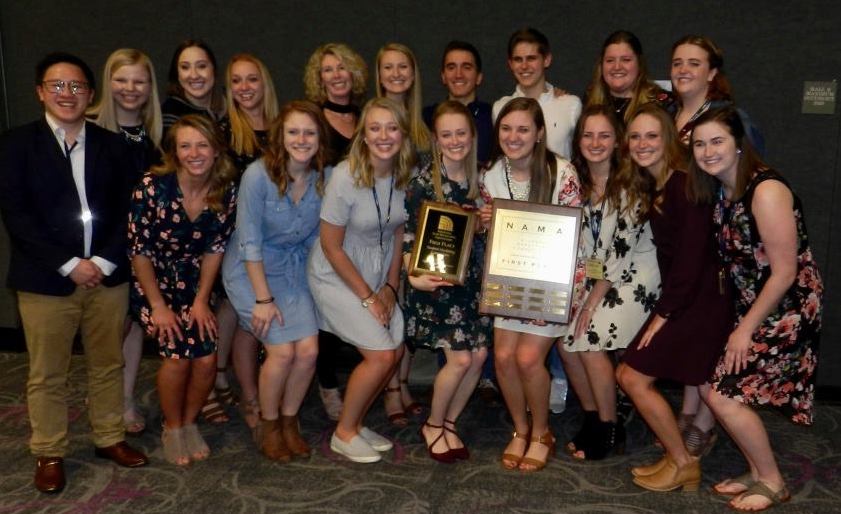 “As marketing team coordinator, I work to bring the plan together and encourage everyone to work side by side as we were thinking outside the box,” Wedig says.

Botham’s role is to teach basic marketing concepts and lend business and marketing insights from her experience, she says. “In reality though, I am merely the ship’s navigator, guiding it back on course and steering it in the right direction as needed,” says Botham.

Botham has been the NAMA advisor at UW–Madison for the past 14 years. Under her leadership and direction Wisconsin NAMA has earned nine top-four finishes, including four Reserve Championships and another National Championship in 2016.

The team spends some of the fall semester and the entire spring semester preparing for the competition. Members meet multiple times throughout the week both in their small groups and as a whole class. The competition involves three rounds of presentations before judges who are agri-marketing-industry professionals.

Spending hours on end and many late nights in Hiram Smith Hall, the students really get to know one another. Many of the students often refer to the NAMA group as their UW family. Advisor Sarah Botham is known as the “NAMA Mama,” and is more than just an advisor or professor for the students.

“Wisconsin NAMA becomes a family, and it’s so important for me to see our team grow as they are the future of the agri-marketing world,” Wedig says. “Preparing them for their future careers makes all the long hours, time and energy worth it, and becoming National Champions is just an extra bonus.”

Meanwhile, the Dairy Challenge team also met with success. Dairy Challenge is an applied dairy management competition that requires students to analyze a commercial farm and then create a 20-minute presentation of their observations and recommendations for a panel of judges. The judges are dairy producers, veterinarians, farm finance specialists and agribusiness personnel. 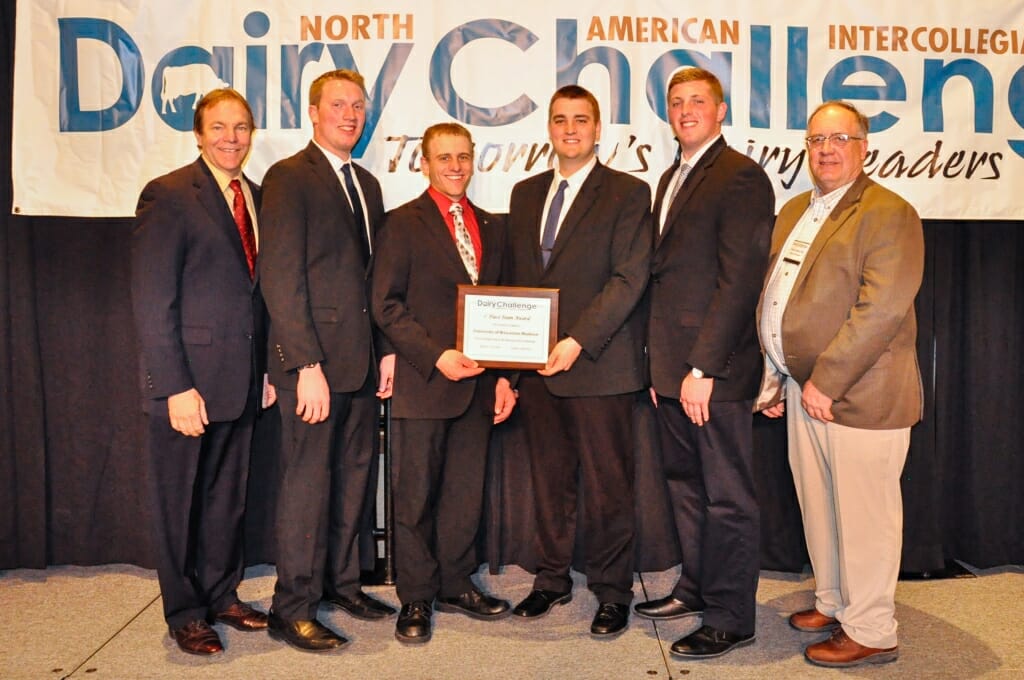 “Winning this title would not have been possible without the continuous support of our coaches, Ted Halbach and Dave Combs, who continually motivated, encouraged and challenged us all to be as prepared as possible when the competition started,” Schmitz stated.

The night before they visit the farm, the team analyzes the farm’s data and files. The team broke up the responsibilities depending on each individual’s expertise. Willems focused on feeding management, walking through the lactating pens on the farm and observing the transition area. Schmitz analyzed the farm’s financial statements and looked at nutrition, management, cow comfort and facility design. Voigts spent time on genetic and reproductive data and focused his attention on calves and young stock on the farm. Hamilton was primarily in charge of the milking parlor and milk quality-related issues.

“We all worked together and since all members on the team knew each other’s strengths and weaknesses, we were able to be a very efficient team,” Hamilton says.

The team members were selected based on their performance at the Midwest Dairy Challenge contest and subsequent practice farms.

“I have had many great experiences that have contributed to my success in this competition. The in-depth classes offered in dairy science and agricultural economics were very beneficial,” Willems stated. “I have also completed two internships with Cargill Animal Nutrition where I visited around 30 dairy farms each summer. This allowed me to see many different styles of dairy management.”

Being asked to represent the UW–Madison Dairy Science Department at this competition was an achievement, but bringing home a championship was really a dream come true for these four men.

“Winning this contest is an amazing culmination to my four years here as a dairy science student,” says Voigts. “It is a true testament to the education and experiences I have had here at UW.”