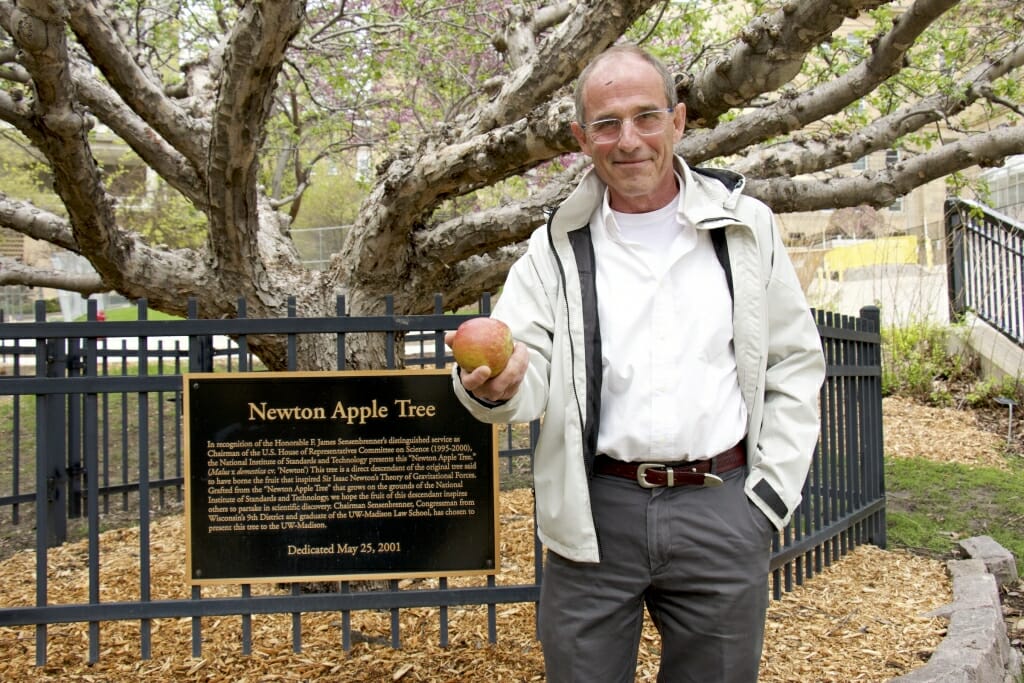 A series of experiments in Carlsmith’s course begins with measurements of gravity. In 1666, Isaac Newton supposedly was inspired to explore gravity after watching an apple fall from an ancestor of this tree, growing in the UW–Madison Botany Garden. Photo by David Tenenbaum

Smartphones get a workout in a two-semester accelerated introduction to physics for potential University of Wisconsin–Madison physics, astronomy, and applied math, engineering and physics majors.

Phones get dropped, says Duncan Carlsmith, a professor of physics. They get thrown like a football. They get strapped to a pendulum or lashed to a bicycle.

Later, the phones spew out the data gathered by a surprisingly broad array of sensors: accelerometers, gyroscopes, audio and light sensors, magnetometers, and a precise timer.

The mobile devices that live in the tight clutch of the average college freshman contain much more than an able computer, says Carlsmith. “You have this thing in your pocket with all these cool sensors. In many respects they are better than our lab instruments. What happens when we get the data out?”

In Physics 247-8, honors students spend a year answering that question, and many others.  Week after week, the smartphone becomes an instrument for teaching and learning introductory physics.

Carlsmith’s “questions-beget-answers-that-beget-questions” approach becomes clear from a classic physics lab, which re-instruments a standard class exercise: Drop an object – a dumb weight or now a phone –and measure how quickly it accelerates under the force of gravity.

Physics students have been doing the experiment for more than a century, often using a timer that depends on the 60-per-second waves of alternating current.

The phone’s sensors, particularly the microphone, the clock and the three-axis accelerometers, are far more precise, Carlsmith says. Yet when the acceleration of gravity is derived from phone data, it may not match the accepted local value.

The explanation emerges when phone data is processed with software called MATLAB, which allows students to use existing code, or write new code, for a practically infinite range of calculations. In the gravity experiments, MATLAB can help students:

Other studies rely on the phone’s camera. “We can use MATLAB to find objects with certain colors, or shape features such as corners or circles,” Carlsmith says. “Students use MATLAB image processing tools to precisely locate objects in mobile phone images while simultaneously calibrating their mobile camera systems by processing multiple images from different poses. After the students put down some coins, their phones can ‘see’ so well that the program can tell how much money they have.”

To Carlsmith, the class’s undertext is self-efficacy. “I want the students in physics to be interested in black holes and elementary particles, yes, but also in biology, in everything, while thinking about worthy applications of even everyday technologies. I want them to realize that they already have a powerful tool in their pockets and another on their desks so they can follow their curiosity, and get things done.”

One stunning use of the phone uses a tiny transparent sphere affixed to the phone camera lens cover. Elementary optics – another intro physics staple – explains how this zero-cost microscope can resolve the organelles inside blood cells. 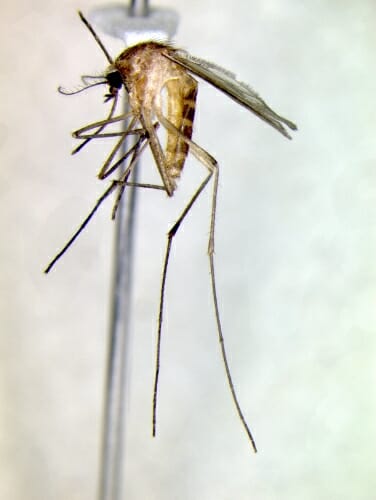 The camera was also the starting point for phone-laptop-MATLAB based image processing that enabled a freshman student to initiate an artificial intelligence approach to identifying mosquito species.

“Mosquito species identification has historically required a specialist since the defining characters are often hard to see,” says Susan Paskewitz, a professor of entomology and co-director of the Midwest Center of Excellence for Vector Borne Disease. Automation would reduce the cost and complexity of decisions about warnings and controls.

A second student evaluated the dispersal of insecticide droplets on hundreds of sample slides.  “A key issue in trying to control a disease outbreak or epidemic (like West Nile virus or Zika) is to use sprays that kill adult mosquitoes,” Paskewitz says. “But we have limited knowledge about how good the penetration of these sprays is in neighborhoods where there are a lot of barriers.  The usual way is to measure droplets on slides with expensive software and equipment.  With Duncan’s help, we used a smartphone to capture photos and then he and his student developed software tools to do the measurements. The new method has great promise as a low-cost way to monitor and optimize the treatments.”

“All of us on the mosquito team were very impressed with the ideas, skills, and excitement that Duncan and the students brought to the projects,” Paskewitz adds.  “I think it is a great example of hands-on learning and one that resulted in solutions for real problems.”

Carlsmith says the labs based on phones and MATLAB satisfy an emerging priority in science, technology, engineering, and mathematics education: incorporating computation for students whose whole career may be spent exploring massive digital datasets.

“Still, the focus is physics, science, first,” Carlsmith says. “Computing is how you do the science.”

It’s clear that the one-year course has captured the freshman imagination. Equally clear, it provides a creative playground for Carlsmith, who also coordinates the Physics Garage makerspace in Chamberlin Hall.

After he excitedly described the year-long course just concluded, we asked, “Are your students having more fun than you?”

“That’s not possible,” he replied.