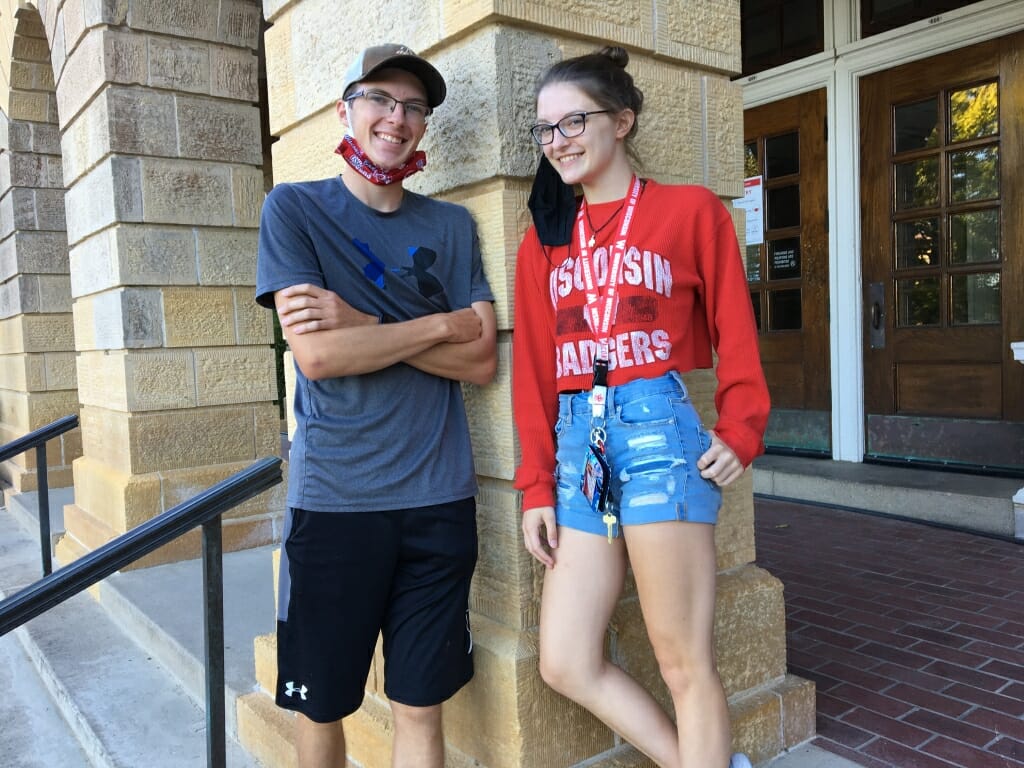 Twins Morgan and Riley Parks are going through the pandemic college experience together as freshmen at UW–Madison. “It’s a little strange and a little sad, but it’s nice that we still get to be here even if it’s not the same,” Morgan says. Photo by Doug Erickson

A few months ago, twins Morgan and Riley Parks found themselves in a familiar situation.

They had, once again, landed at the same place at the same time — in this case, as co-valedictorians of their graduating class at Altoona High School, near Eau Claire, Wisconsin.

Each spoke for four minutes, starting with Morgan.

“She tells me that a lot,” Riley says.

The two are now freshmen at UW–Madison, experiencing together many of the same pandemic-tinged college experiences. They didn’t set out to attend the same university, but they seem relieved that it turned out that way.

Both were accepted to multiple universities but chose UW–Madison in part because of its strong reputation in the STEM fields (science, technology, engineering and math). While neither has declared a major, Morgan is considering biomedical engineering or pharmacology. Riley is leaning toward molecular biology with a pre-med focus.

At Altoona High School, they participated in many of the same activities — cross-country, band, math club, the National Honor Society — and took many of the same AP courses. The title of valedictorian at Altoona is awarded to any graduating senior with a 4.0 GPA. Out of the 99 students in the 2020 graduating class, there were three valedictorians, with Morgan and Riley forming the majority.

“It was a little bit of a friendly competition between the two of us,” Morgan says. “I think it pushed us to do better in our classes.”

At UW–Madison, both are living in residence halls — Riley in Smith, Morgan in Sellery. They’ve decided not to physically distance from each other, instead opting to join a pod of four with each other’s roommates. All of Morgan’s classes are virtual. Riley’s are, too, except for one in-person course.

“We’re seeing each other every day, which we didn’t necessarily think would be the case,” Morgan says. “There’s only one other person from our high school here, so we don’t have a lot of people to do stuff with.”

Though they enjoy many of the same things — running, math, “Game of Thrones” — they differ in a few ways.

“There are a lot of things socially that she’s so good at,” Riley says. “She seems to make friends with everyone. I tend to keep more to myself, and it’s always been that way.”

“We think about things differently,” Morgan says. “He takes things very step-by-step, and I tend to look more at the big picture. It helps us work well together.”

Do they ever get on each other’s nerves? Sure, they say. Yet asked what they tease each other about, there’s a lot of dead air.

“I can’t think of anything,” Riley says.

“Brand New Badger” is a series of profiles spotlighting some of the new students on campus this fall.