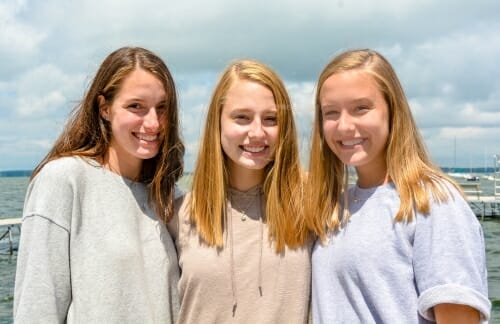 Annika, Claudia and Jenna Strand are triplets who are attending UW–Madison together this fall. Kayla Huynh

For Annika, Claudia and Jenna Strand, three is the magic number.

The sisters are triplets, born on May 3 just three minutes apart from one another. The trio even had similar interests growing up, including many of the same friends and hobbies.

And sometimes, they finish each other’s sentences.

Now, the three not only share the same birthday but are also freshmen at the same university — UW-Madison.

It’s not unusual, however, for the triplets to travel down the same paths. In fact, Annika, Claudia and Jenna were all in the same extracurricular activities at Wauwatosa West High School, from soccer team and ski club to key club and National Honors Society.

Though each of the sisters considered different colleges, they eventually agreed upon UW–Madison for its academic prestige and campus life. The three said they plan on remaining close but also see college as a time to become more independent from one another.

“At first, I definitely thought I wanted to go to a different school because I didn’t want to be one of the known triplets on campus,” Jenna said. “But, UW–Madison is a big enough school where we don’t have to see each other all of the time.”

That desire for independence is reflective of where they live on the UW–Madison campus — the three sisters live in the Southeast residential area, but in separate dorms. Despite being in different residential halls, Annika, Claudia and Jenna said they feel at ease knowing they’re in close proximity to one other.

As the sisters have gotten older, they’ve also realized some of their differences. Jenna, for example, considers herself to be more extroverted than the other two triplets. Annika is passionate about art, while Claudia enjoys science and numbers.

What they ultimately agree upon is their mutual excitement about being Badgers.

“I love the campus area, especially the school pride that everyone seems to have and all of the extra activities to do around campus,” Annika said.

Some activities they already plan on getting involved with in their first year are the Hoofers Ski Club and the intramural soccer team as well as other community service-oriented organizations. Claudia and Jenna are also in the same psychology class together, and Annika and Claudia are both in the School of Business.

“Growing up, I’ve always been a Badger fan,” Claudia said while Annika and Jenna nodded their heads in agreement. “Even when I was young, I knew I wanted to come here because this is a great school — this is a great community.”

Why I chose UW–Madison: UW–Madison has a great School of Business and there is always something different and fun to do around campus. – Annika

What I’m most looking forward to this year: Meeting all types of different people and making new friends, getting to branch out and becoming more independent. – Claudia

Something on my Bucky list: Cheering on the Badgers in all of the different athletics events, especially football, volleyball, hockey and basketball. – Jenna