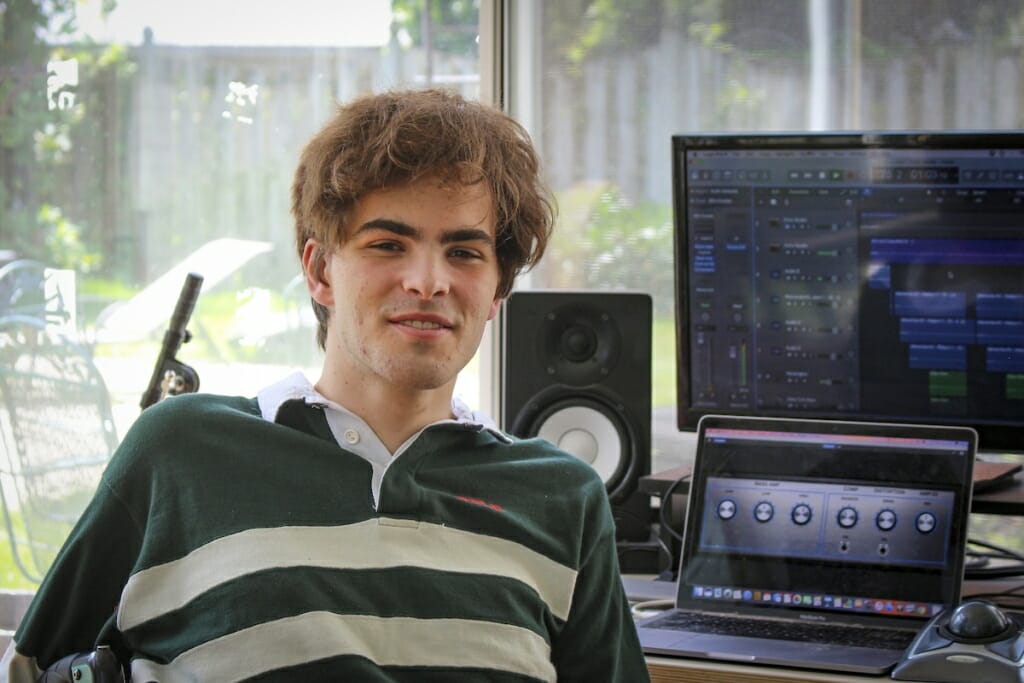 Freshman Max Rammer is studying business and hopes to one day run a music studio. He recorded his debut album at his family’s home in Janesville. Photo by Pa Da Lor

Max Rammer started playing around with music software in high school, but he only recently began to think of himself as a performer — someone who writes songs and sings them publicly. He needed a stage name, so he chose “Thatslife.”

It’s become something of a mantra for him.

“In two words, it embodies what I’m trying to do: deal with what happened to me, and then move on,” says Rammer, 20, a UW–Madison freshman from Janesville.

Rammer was set to attend UW–Madison two years ago when a serious spinal cord injury just a few weeks before classes forced him to postpone those plans. Diving into a swimming pool at a friend’s house, he hit his head with great force on the bottom.

“I knew instantly that something catastrophic had happened,” he says. “I couldn’t move anything but my mouth.”

He nearly drowned but was rescued by a friend. He suffered a C4 spinal cord injury. The term refers to damage about midway down the cervical spinal cord, the topmost portion of the spinal cord that is located in the neck and upper shoulders.

The accident left him paralyzed almost entirely from the neck down, though he has the use of a portion of his arms, including his wrists. For this — and for not sustaining any brain damage — he feels fortunate.

“Most people with C4 injuries can’t use their arms,” he says. “I know how bad it could have been, so that’s helped me come to terms with it.”

During his long rehabilitation, he turned to music as a necessary distraction and a salve. It provided a new passion and kept him from sliding into depression.

About a year ago, he released an eight-track EP of original compositions that he sings lead on. He titled it “21·25,” an homage to the floor and room number at the rehabilitation facility in Chicago where he spent four months.

Rammer recorded the album with several collaborators on the sunporch of his family’s home in Janesville. He describes the sound as a blend of pop, R&B and hip hop.

Scott Gordon of the website Tone Madison wrote approvingly of the EP, describing the mood throughout as bittersweet.

“Rammer never sounds like he’s in the depths of despair here,” Gordon writes, “but he definitely creates the sense of someone working through a great deal of pain and trying to maintain a tenuous hold on optimism.”

Rammer says he’s learned to practice gratitude, to let go of materialism, and to appreciate more deeply his family and friends. He often turns to a quote attributed to Eleanor Roosevelt, “Comparison is the thief of all joy.”

Camille Rammer says her son has impressed everyone with his resilience.

“You never think that your child will have to handle something like this,” she says. “I think he’s doing amazingly well.”

In June, Rammer logged a significant first by performing his music publicly. It happened at the Madison club Crescendo, on a double bill with Gabriel Roderick, a Minneapolis performer who goes by the stage name “Freaque” and who also has a spinal cord injury.

Rammer, who wasn’t expecting his singing to impress people, says the audience response to his performance was “weirdly positive.” It bolstered his confidence, and he hopes to become part of the Madison music scene now that he’s a resident of the city.

His desire to attend UW–Madison never wavered throughout his recovery. He’s majoring in business — his original choice — though his focus now is less on getting a high-paying finance job and more on gaining the skills to run his own music studio. He’s already producing works for other artists while prepping a second album of his own material.

As the school year approached, Rammer said he felt some nervousness. It helps that he’s been attending Badger football games since he was a kid and that both his parents are alums who know the campus well. The couple met in the Civil & Environmental Engineering Program. Doug Rammer works at the federal Forest Products Laboratory on the west end of campus.

The McBurney Disability Resource Center, which works to make campus accessible for all students, has been a big help in his transition to college, Rammer says. He is living on campus in a single-occupancy dorm room with a private bathroom. Caregivers provided through insurance help him in the mornings and evenings. He uses a power-assisted wheelchair to get around campus.

He didn’t bring a lot with him from home, part of his new stripped-down aesthetic. There’s his UW sweater, his hospital bed, a few keepsakes, and Alexa, Amazon’s cloud-based voice service. She turns on his lights, adjusts his fan, makes phone calls, and — this is pretty sweet — plays his own recordings.

Rammer has heard from people with debilitating injuries that his musical achievements give them hope. The thought pleases him.

“That’s exactly what I want to do, help others, because that’s what’s helped me — to see others with disabilities doing things that I never thought I could do,” he says. “I want to be that inspiration for someone else.”