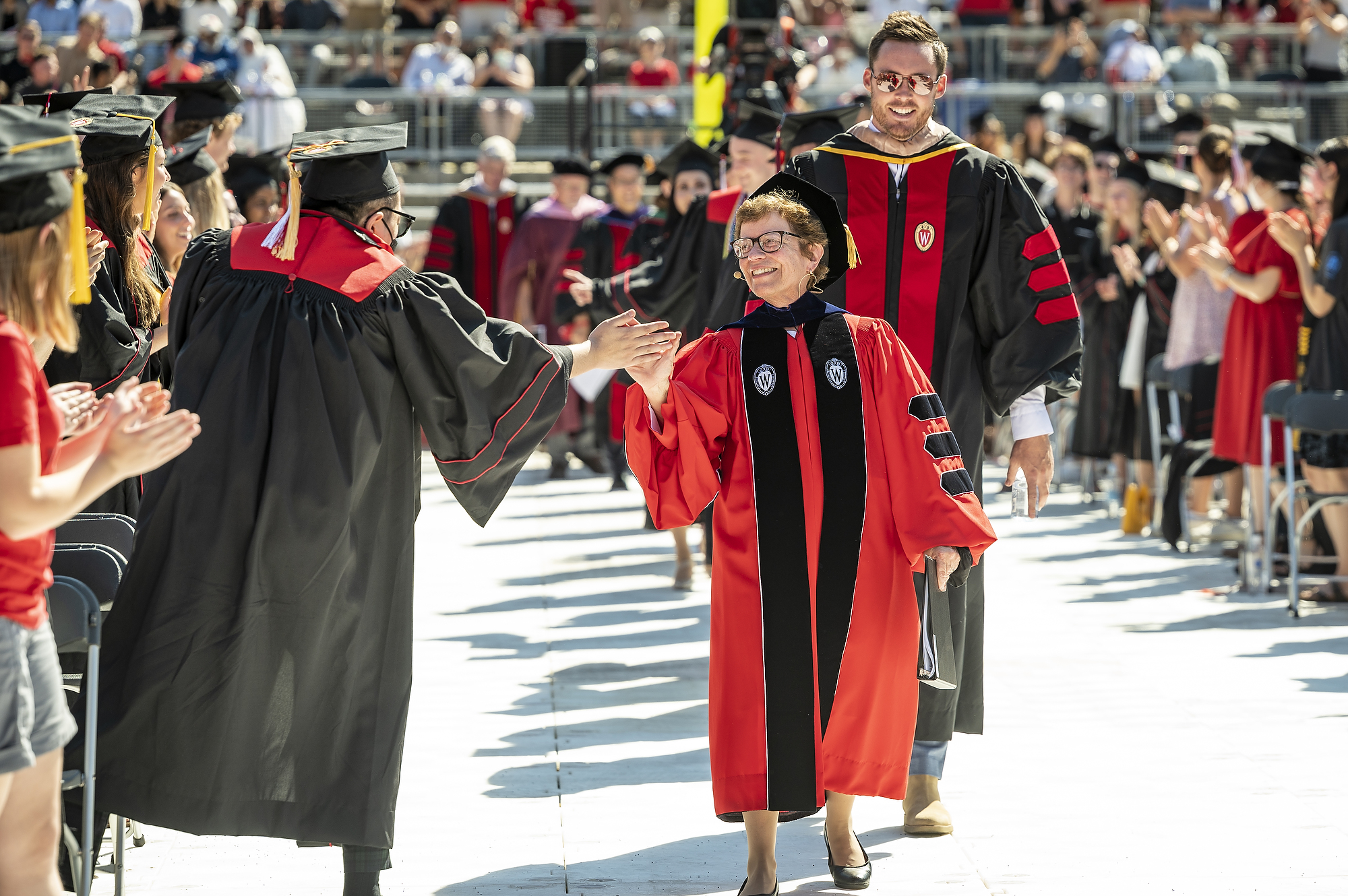 Rebecca Blank says some of the happiest moments in her time as chancellor have been celebrating Commencement at Camp Randall with graduates and their families. Here she exchanges high fives with a member of the Class of 2020 who returned for a ceremony in September. When the original ceremony had to be held virtually due to the COVID-19 pandemic, Blank promised graduates she’d bring them back for an in-person celebration. Photo: Bryce Richter

Chancellor Rebecca Blank will leave the University of Wisconsin–Madison at the end of the 2021-22 academic year to assume the presidency of Northwestern University in Evanston, Ill.

Northwestern University announced Blank’s selection on Monday. She will succeed Morton Schapiro as the university’s 17th president in summer 2022.

Blank has served as chancellor since July 2013. Her tenure as chancellor is the longest since Irving Shain, who served for nearly a decade until his retirement in 1986. She has the second longest tenure of any current Big Ten public institution president or chancellor.

During the past eight years, Blank has focused on enhancing the student experience and educational outcomes, further elevating the university’s world-class faculty and placing the university on firm financial footing through a combination of private fundraising and innovative strategies.

“Leading UW–Madison and serving the people of Wisconsin has been an honor and a privilege,” says Blank. “Now it’s time to let someone else step into leadership. I have many connections with Northwestern and am excited about this new opportunity.

“It was always my goal to leave this university stronger than when I came and I believe that together we have achieved that,” she adds.  “I want to thank the many staff and faculty who have been partners and collaborators in everything we’ve done.” 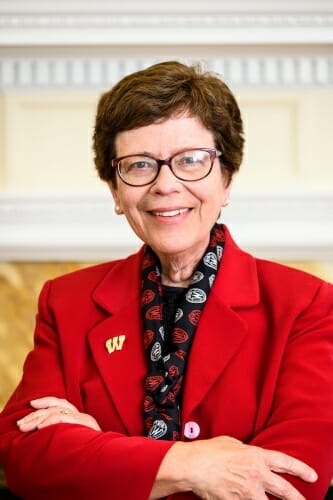 An internationally known economist, Blank worked in academia and in three different presidential administrations, most recently as deputy secretary and acting Secretary of Commerce under President Barack Obama. She served on the Council of Economic Advisors under President Bill Clinton.

Between her service in government, she also served as dean of the Gerald R. Ford School of Public Policy at the University of Michigan. She was on the faculty at Northwestern from 1989 to 1999, serving as director of its Joint Center for Poverty Research.

“I love Madison, and I also have deep ties to Evanston,” she says. “I served on the Northwestern faculty and was married in Chicago. My daughter was born at Evanston Hospital and returned 18 years later to attend Northwestern as a student.”

At Wisconsin, she is widely credited with enhancing outreach to communities and businesses around the state of Wisconsin, forging new relationships with the legislature and state government, managing questions about the university’s tenure protections and taking multiple new steps to improve the university’s finances following a period of budget cuts.

“It was always my goal to leave this university stronger than when I came and I believe that together we have achieved that,” Blank says.

Despite the pandemic, the university is in strong health and improving by almost every measure, she told the Faculty Senate on Oct. 4.

The graduation gap for undergraduates between white students and historically underrepresented students has been cut nearly in half over the last 10 years. The university has set a new record for average time-to-degree for all undergraduates – 3.89 years – 40 days less than 4 years.

More that 4,000 Wisconsin students are attending with zero tuition and fees under the Bucky’s Tuition Promise or Badger Promise programs. This year’s entering class has more students from Wisconsin than any in the past 20 years. Institutional scholarship aid has quadrupled – from $25 million in 2012 to almost $100 million this year.

Since 2020, the university has raised $50 million from donors for the Raimey-Noland Campaign, a new initiative to enhance diversity, equity and inclusion across campus, including scholarships, faculty support and academic programs. In recent years, the university has hired dozens of diverse faculty across the university through the TOP program launched by Blank.

The university continues to be highly sought after by students and parents, with a record 8,400 freshmen attending after a record 54,000 applicants.

The university continues to perform strongly in rankings. UW–Madison was ranked 25th worldwide by the Center for World University Rankings. Washington Monthly recently named UW–Madison the top public university in the country and 4th overall.

This fall, the university celebrates the end of the most successful fundraising campaign in its history – raising $4 billion dollars. UW–Madison has announced a string of transformational gifts, including a commitment from John and Tashia Morgridge and the Wisconsin Alumni Research Foundation (WARF) for $175 million to launch the School of Computer, Data & Information Science (CDIS).

As part of the campaign, 255 new endowed faculty positions have been created, an increase of 300 percent. Blank also restarted the university’s cluster hiring initiative, which enables transformational research in forward-looking fields such as artificial intelligence, the origins of life and astrophysical data, among others.

During Blank’s tenure, UW Extension and Wisconsin Public Media both were reintegrated into UW–Madison, deepening the many connections the university has across the state.  Blank has traveled the state regularly, meeting with businesses, political leaders, regents and alumni groups.

The university is highly vaccinated with a 93 percent overall vaccination rate. COVID-19 infections have remained low, allowing more than 90 percent of classes to take place in person.

Amid all of these areas, Blank says that the best symbol of success at UW–Madison comes during spring Commencement, which under her direction became a single ceremony at Camp Randall celebrating students and their families.

“So many of our faculty and staff contribute to that day,” she says. “You see the difference this university makes in students’ lives as we walk down the aisle to confer degrees on our students. Nothing matches that feeling.”

In addition to UW’s accomplishments, Blank’s contributions to academic and policy worlds have been recognized with numerous national and international awards, as well as honorary doctoral degrees.

She serves as the chair of the Big Ten Council of Presidents and Chancellors, on the executive committee of the Association of Public and Land-Grant Universities and on the NCAA Board of Governors.

To request an interview: Northwestern University will be facilitating interviews with Chancellor Blank today between 11 a.m. and 1 p.m.; contact Jeri Beth Ward, jeri.ward@northwestern.edu, or Jon Yates, jon.yates@northwestern.edu to arrange a time.

Photos: High resolution images of Rebecca Blank may be downloaded at https://go.wisc.edu/rebeccablank.