When University of Wisconsin–Madison Alpha Phi Alpha members mention they’re in a fraternity, they can usually guess how people will respond.

It’s not quite that type of frat, Alphas explain. 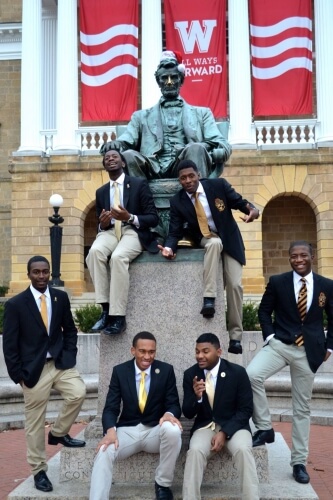 Alpha Phi Alpha is one of nine historically Black Greek Letter Organizations (BGLOs), seven of which are currently active on UW–Madison’s campus. They don’t have a house or public rushes, and they number at just six active members.

Overall, BGLO members account for about one percent of the UW–Madison students who participate in campus Greek life. But while their numbers may be small, their personal histories and the rich legacy of their organizations fuel an impressive list of programs that pursue social justice.

This year, the Alphas contributed to the community by holding events for March of Dimes, The Salvation Army, Adopt-A-Highway, food pantries and after-school programs for at-risk youth.

The five active members of Delta Sigma Theta sorority, in addition to their traditional programs and community service, held their first National Hunger and Homelessness Awareness Week, bringing in piles of donated clothing, raising funds donated to the Young Gifted and Black Coalition of Madison and handing out sandwiches to the homeless on State Street.

In February, Black History Month, UW–Madison’s BGLOs are holding signature events to mark the accomplishments of African-Americans. The Deltas are presenting Delta Week from Feb. 14-20, which will include a personal finance education session, a talent show, a free snack study break and other activities. Alpha Phi Alpha’s annual Miss Black and Gold Scholarship Pageant will take place this year on Thursday, Feb. 25.

“We’re not a silent minority. We are a robust minority.”

The common theme that runs through these programs and events is social justice. Voter registration in African-American communities has long been a focus for Alpha Phi Alpha. This year, Cole spearheaded the organization of the Black Out solidarity march on the UW campus just days after the incidents on Mizzou’s campus. Since then, he and other students have been meeting with university leaders to discuss adding a cultural competencies training program and a black student center, among other things.

“We’re not a silent minority. We are a robust minority,” says Martinez White, a member of the Alphas’ alumni chapter.

Alumni chapters thrive because BGLO commitments are for life, White says. For Alphas, this means the programming and strong sense of brotherhood continue long after they receive a diploma. BGLO alumni chapters in town are heavily involved in community service activities like fundraising, voter registration, business and health fairs, educational scholarships and even international relief work.

“It not only works on campus, it works beyond graduation,” says Terri Strong, president of Madison Alumnae Chapter of Delta Sigma Theta and a UW-Milwaukee graduate.

While alumni members partner with students for some events, undergraduates still have plenty of activities to manage on their own.

Many undergraduates simultaneously hold other leadership positions on campus, in organizations such as the University Gospel Choir, the National Pan-Hellenic Council, the Filipino American Student Organization and the National Society of Black Engineers.

This means one of the greatest challenge of being a Delta, says chapter president Gretchen Carvajal, is finding time to sleep.

More seriously, it can feel discouraging to be on the ground working and making small victories, yet see tragic events happen.

“You know you’re doing amazing things in the community,” says Carvajal, “[but] you wake up the next morning and someone else got shot. We represent a huge chunk of people who are fighting against that. It feels like every time we get a small victory, it gets taken away.”

“We think we’ve come far, we think things have changed, but when it really gets down to it, things haven’t really changed a whole lot,” says Strong.

The motivation to face this reality, according to White, can come from remembering a personal past.

White came to UW–Madison from one of the most economically challenged neighborhoods in Milwaukee, leaving his mother and five siblings behind. As the first person in his family to go to college, he was ready to serve and eager to give back, and Alpha Phi Alpha provided him with the perfect way to turn his eagerness into action.

“I really, firmly believe that the next generation of movers, civil rights [leaders] and trailblazers is the lineage and legacy of those organizations. Don’t be surprised if you find out about us later.”
Gretchen Carvajal

White thinks this is the case for many students who are the first in their family to go to college. “This is our opportunity to really make up for some of those opportunities our family didn’t get before we stepped on campus.”

Cesar Gutierrez, president of Alpha Phi Alpha at UW–Madison, agrees. A first-generation college student who spoke Spanish as his first language, his early years were spent watching his parents live paycheck to paycheck.

“Every time I look at these kids, that’s all I remember,” Gutierrez says. “So now seeing these kids and remembering those opportunities I was given, those were blessings. It feels weird if we don’t give back.”

Members who come from more privileged backgrounds also feel the urge to serve.

“This is what we could have been if we didn’t have that support,” explains Alpha member Ossey Ituah.

White believes that this makes it possible for such small numbers to accomplish so much. “It’s not work, it’s duty; it’s part of what we’re supposed to do. It’s part of our ethical fabric. We try our best to exhaust all our energy on campus.”

Another source of motivation, according to Carvajal, comes from the Deltas’ emphasis on deference: looking to the leaders who have gone before them in the organization. Prospective members are often encouraged to do their own research about the history of the organization before they consider joining, Carvajal notes.

“It’s always about looking back in order to move forward,” she says.

Both Carvajal and Strong were initially drawn to Delta when they witnessed Deltas’ active community service. Then they did their research —  Carvajal online and Strong, years earlier, with a pile of encyclopedias in the library — and found an organization with an impressive history of social justice.

Strong discovered that the Deltas’ very first act of public service was participating in the women’s suffrage march in Washington in 1913. They had to fight for their right to participate, and as the only women of color there, were harassed for their participation.

“When I read that, and thought about the collective strength that had to come together to make that happen, it is incredible,” says Strong. “That was really a moving factor for me to think about when seriously considering pledging Delta Sigma Theta.” 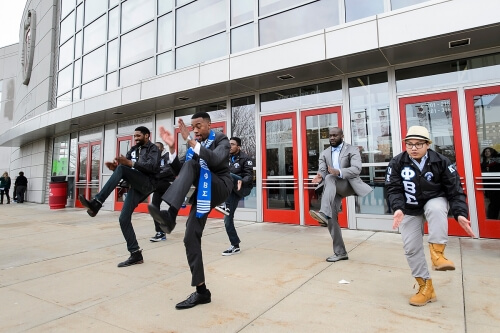 UW-Madison’s Alphas realize that many people are unaware that Martin Luther King Jr. is part of their organization’s legacy. Similarly, much of UW’s campus may see results but not be aware of Alpha involvement in bringing them about, says Cole.

“A lot of people nationally don’t know about Alpha, but a lot of people know about the civil rights movement. I think it’s a direct parallel to the way we work on this campus. You may not know about Alpha Phi Alpha but you know about O’Sickness (the largest indoor party in Wisconsin hosted each fall semester), voter registration, or you’ve seen some work being done,” says Cole, noting that Alphas often work “in the shadows.”

They may be working behind the scenes now. Just like the Greek brothers and sisters before them, however, their passion and action means they likely won’t stay in the shadows forever.

“I really, firmly believe that the next generation of movers, civil rights [leaders] and trailblazers is the lineage and legacy of those organizations,” says Carvajal, pointing to activities like voter registration and the Black Out March for proof. “Don’t be surprised if you find out about us later.”