Chris Bradfield, a UW–Madison Professor of Oncology, has been named the new director of the Biotechnology Center. Bradfield had been serving as the center’s interim director since August 2018.

Bradfield will report to the Vice Chancellor for Research and Graduate Education. The Biotechnology Center was founded in 1984 by McArdle Laboratory for Cancer Research emeritus faculty member Richard Burgess, who also served as director for its first 12 years. 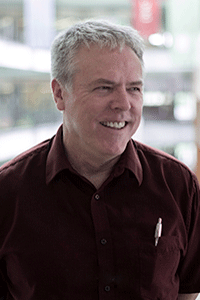 “This was an easy decision,” Bradfield says on accepting the director role. “Over 30 years ago, Dick Burgess laid a great foundation for UW–Madison’s Biotechnology Center. Mike Sussman then took the reins and built a technological powerhouse with incredibly talented staff.

“Our job over the next decade will be to stay ahead of the biotechnology curve, improve service and improve turnaround times, so that everyone on our campus and in our state can benefit from what they have built.”

Bradfield, whose research at McArdle centers on a family of transcriptional regulators known as PAS proteins and how they interact with environmental factors to cause disease, has held a number of leadership positions on campus, including director of the Molecular and Environmental Toxicology Center beginning in 2006, director of the Office of Graduate Support for the UW School of Medicine and Public Health since 2013, and formerly interim director of the Wisconsin Institute for Discovery. He received his Ph.D. in toxicology and nutrition from the University of California, Berkeley.

“The Biotechnology Center is an important partner and critical resource for many research groups across campus. Dr. Bradfield brings experience working across campus in various leadership and research roles to the director position and is fully committed to the center’s mission as a quality, comprehensive, multidisciplinary biotechnology center that supports, coordinates, disseminates and advances biotechnology.”

To provide the organization and environment necessary to accomplish its mission and goals, the Biotechnology Center is home to several core facilities and services, including the Bioinformatics Resource Center, DNA sequencing, genome editing–animal models, Gene Expression Center, and mass spectrometry.

The center also hosts the popular Wednesday Night at the Lab series, which is held 50 times a year and provides the latest news to statewide audiences from UW–Madison researchers as they describe their investigations and inventions.