Biomass blues: Breaking up not so hard to do

Using a chemical crowbar – actually, a solvent – made from the very organic matter it deconstructs, a University of Wisconsin–Madison spinoff business is advancing an audacious effort to convert biomass into three profitable streams of industrial chemicals.

Biomass is a wide category of material that includes branches and leaves, food waste, coconut hulls, sawdust and corn stalks. This cheap, abundant organic material is structured with chemical bonds that retain solar energy gathered via photosynthesis. Ancient biomass is the source of fossil fuel. Modern biomass is eaten, or transformed into ethanol to feed gas tanks. 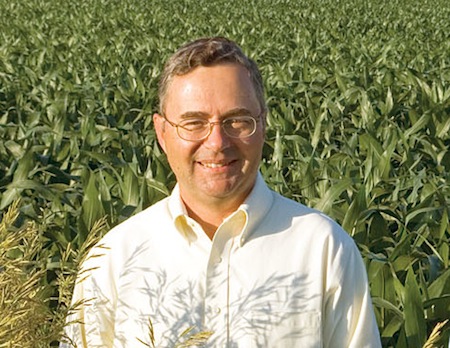 But the ultimate potential of these chemical bonds remains to be fully explored, says James Dumesic, a UW–Madison professor of chemical and biological engineering. His discovery of a new way to tear apart biomass is the basis for GlucanBio, a St. Louis company licensed by the Wisconsin Alumni Research Foundation (WARF) to use patents from Dumesic’s lab.

Biomass contains three groups of compounds: cellulose, hemicellulose and lignin. All three can be useful, if they can be produced at the right price. The process that Dumesic pioneered in research supported by the Great Lakes Bioenergy Research Center can split biomass into three separate streams.

Glucan’s hurdle is to prove that this process is both workable and profitable on the industrial scale.

As scientists around the world try to deconstruct biomass, Dumesic traces the unique advantages of his process to the solvent, called gamma-Valerolactone, or GVL. GVL helps an acid break bonds in biomass with extraordinary efficiency because, unlike most solvents, it does not soak up protons, the charged particles that make acids so good at breaking bonds.

“When GVL is mixed with an acid,” Dumesic says, “the protons remain highly reactive and start to destroy bonds joining the three biomass components. As a result, we can use a low concentration of acid and work at modest temperatures, and still get a high yield with minimal damage.” 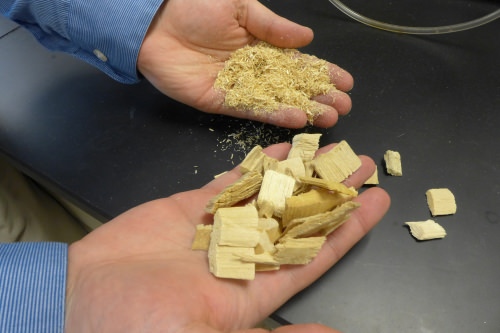 Glucan Biorenewables tests dozens of types of biomass to ensure they can be separated by their solvent. Shredding the chips into something resembling sawdust is the first step. David Tenenbaum

Dumesic acknowledges that enzymes — biologically based chemicals — separate a higher percentage of biomass, but they are slower and more expensive than GVL, and must be matched to particular types of biomass. Hot, concentrated acid baths can deconstruct many types of biomass, but heating costs money, and the process may damage the products, reducing their value.

After GVL’s potential became clear in 2013, Jeremy Luterbacher, a postdoctoral researcher, spent 18 months scaling up the process in the WARF Accelerator Program until he reached the target for sugar concentration in the outputs — more than twice the sugar level in Coca-Cola.

Glucan is currently working to streamline the GVL process. To make it work on the million-ton scale, as much as 99 percent of the solvent must be recycled, says Dumesic, who is scientific director and part owner of the company. In a process reminiscent of the old drawing of a snake eating its tail, Glucan plans to derive new GVL solvent to deconstruct more biomass from the waste material left after GVL has created the three product streams.

Glucan has already passed some milestones, says CEO Larry Clarke. GVL easily converts hemicellulose into the sugar xylose, which can then be transformed into furfural — an industrial chemical used for plastics. Clarke says several U.S. firms that import furfural from China are ready to buy if the supply and price are right. 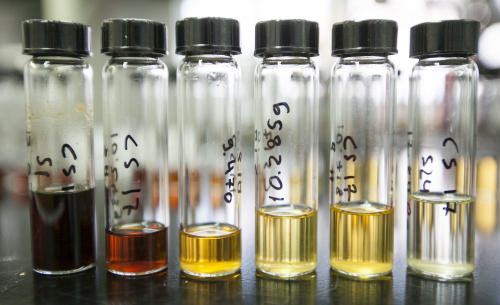 Cellulose can be used to make glucose, which is fermented into ethanol, but Glucan’s gentle process leaves the cellulose fibers intact, so they may fetch a much higher price from rayon manufacturers.

And that leaves lignin, a tough compound that is often the stumbling block in biomass utilization. Lignin has some low-value uses, Clarke says, but “we have grants in process, or already approved, to take our particular type of lignin and make insulating material that could be useful in cellphones, or even carbon fibers.”

Lightweight, strong carbon fibers are used in jetliners and bikes, and could be used for fuel-efficient autos, Clarke says. “Making carbon fibers from lignin and replacing steel in the auto market is the holy grail of lignin technology.”

Glucan’s future rests on its ability to profit from all three streams, says Clarke. “Several companies can take biomass and make one stream and either destroy the other two, or create low-value products from them. A few now use two streams, but if you can only do one or two, in real-world economics, it tends not to work. We are working on the trifecta, using three of the three revenue streams.”

Once Glucan raises money for a demonstration plant, Clarke says factory-scale production could start within five or six years.