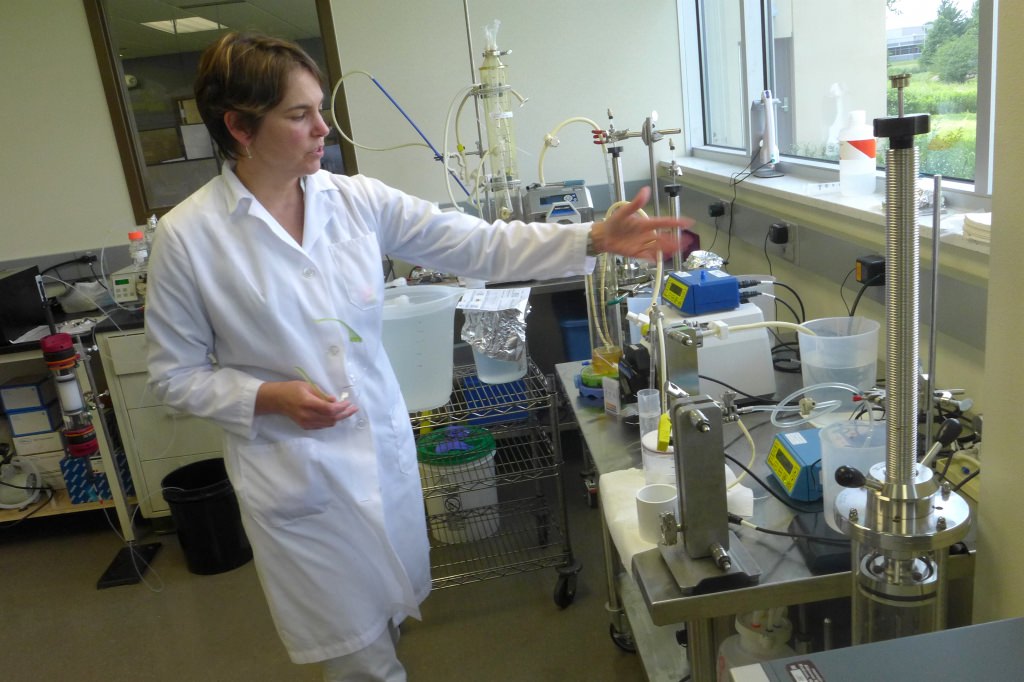 A Madison lab that produces custom-made proteins and antibodies has taken advantage of University of Wisconsin–Madison expertise in quick response manufacturing to bring products to market more quickly and improve profits.

In May, the collaboration between Aldevron and the Center for Quick Response Manufacturing (QRM) was awarded the top prize in the 2016 Applied Research Challenge for the development of methods to make faster, better decisions in biomanufacturing. The award was made by the Production and Operations Management Society.

From the microorganisms it grows, Aldevron extracts a wide variety of biological substances, including DNA, enzymes, antibodies and other proteins — all made to order.

The company employs 18 in Madison, and is headquartered in Fargo, North Dakota.

Aldevron’s market includes pharmaceutical and biotech firms involved in drug discovery and other aspects of personalized medicine. “Our clients need a variety of biological products made to their specifications,” says Tom Foti, vice president and general manager of Aldevron’s Madison lab. “We have finished more than 700 projects and made thousands of proteins.”

The world of drug discovery is being fueled by drugs called monoclonal antibodies — large, complicated molecules made by bioengineered cells, Foti says. For example, Humira, used to treat inflammatory diseases like rheumatoid arthritis, had sales of $3.5 billion in the first quarter of 2016.

Speed matters in drug development, since it can lead to valuable patents that protect inventors’ rights to their inventions. But producing inside cells can be tricky, Foti says. “You have inherent variability, and you have to manage variables that are absent in most other industries: How fast do the cells grow? When is the optimal time to harvest the cells? Different cells or strains may process DNA, RNA or proteins differently, depending on growth conditions such as temperature, cell density, oxygen level and pH.”

In 2013, Aldevron sought to increase its competitive advantages by working with the QRM center on campus. Director Ananth Krishnamurthy explains that QRM is a set of manufacturing principles focused on exploiting “the power of time” by examining organization structure, system dynamics and application throughout an enterprise. 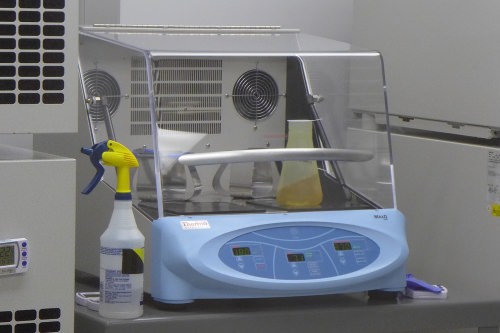 Bacteria growing in flasks on this shaking incubator provide the raw material for Aldevron’s products. After the cells are removed from the incubator, the product is extracted, purified and tested before shipment. Photo: David Tenenbaum

“Reducing lead time through QRM allows a manufacturer to gain a quantum improvement in competiveness and quality, with reduced cost and improved efficiency,” says Krishnamurthy.

“QRM helped us think about how we can eliminate or mitigate the variability and risks associated with producing products inside of living cells,” says Foti. Foti will chair a keynote panel and discuss the QRM project at the BioForward Health Summit at the Overture Center in Madison on Sept 27.

Since its establishment in 1993, the QRM center has more typically focused on traditional manufacturing, yet biological production is a natural fit, says Krishnamurthy. “We needed a good understanding of what they do so we could develop methods and tools that allow them to reduce lead time.”

At Aldevron, even before production starts, QRM’s statistical methods can squelch over-promising and under-delivering, Krishnamurthy says. “If you can’t do something, given the timeline, required quality and cost, you would rather know sooner than later. Our math can support decision-making to determine the best case scenario, and if that is not good enough, you can cut your losses while maintaining a good relationship with the client.”

The same tools help further on, Krishnamurthy says. “Failure in the production run is very expensive. It’s less expensive to fail in the scouting run.” Data from the scouting run may also obviate the need for the mid-scale qualification step.

The application of QRM to biology represents the wave of the future, Krishnamurthy says. “Reducing the lead time for a high mix, custom-engineered environment is not just relevant to biologicals. That’s the way manufacturing in general is headed.”

Aldevron officials and QRM Center Director Ananth Krishnamurthy show and tell how Quick Response Manufacturing methods are being used at the company’s biomanufacturing lab in Madison. Video by UW–Madison College of Engineering