Place a chunk of the clear mineral Iceland spar on top of an image and suddenly you’ll see double, thanks to a phenomenon called double refraction — a result of a quality of the crystal material called optical anisotropy. Beyond just a nifty trick, materials with optical anisotropy are vital for a variety of devices such as lasers, liquid-crystal displays, lens filters and microscopes. 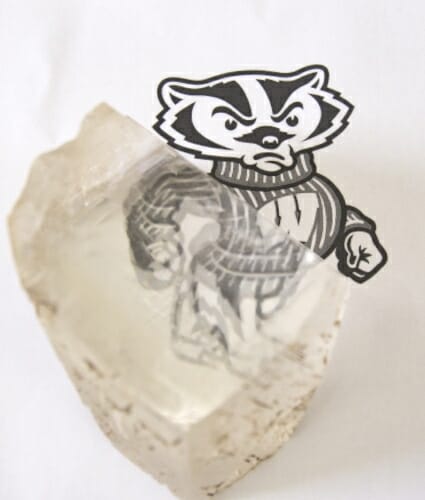 Now, a team of scientists and engineers led by the University of Wisconsin–Madison and University of Southern California have created a crystal that has a higher degree of optical anisotropy than all other solid substances on earth — especially for infrared light. They described the new material in a paper published Monday in the journal Nature Photonics.

“The optical anisotropy is enormous, making the material promising for a range of optics applications,” says Mikhail Kats, a professor of electrical and computer engineering at UW–Madison and one of the senior authors on the paper.

One especially promising use for the new crystal could be imaging and other types of remote sensing using the mid-infrared transparency window, an especially important range of wavelengths that penetrate Earth’s atmosphere with little distortion.

“This class of materials and this approach has a lot of potential,” says Jayakanth Ravichandran, a professor of chemical engineering and materials science and electrical engineering-electrophysics at USC, and a senior author of the study. “We designed the material, made it, and saw a huge effect.”

The new crystal has roughly 10 times greater optical birefringence — a metric of anisotropy — for mid-infrared light than has ever been measured before. That spectacular light-splitting ability comes from a unique molecular structure consisting of long chains of atoms arranged in parallel rows.

Artist’s rendering of a new material that splits light more dramatically than any other substance on Earth. Image: Talia Spencer

Using advanced computational methods, the researchers carefully selected rows of atoms, precisely grew them in the lab, and meticulously studied them.

Optical anisotropy is the tendency of some materials to alter light’s progress through them differently depending on how the beams are traveling. Light slows down by predictably different amounts when it passes through different materials, which is why beams bend when they transition between the air and substances like water or glass.

That light bending is called refraction, and it’s part of what gives diamonds their sparkle. 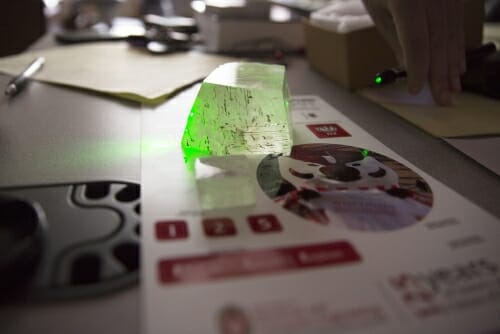 A laser beam passing through the mineral calcite splits due to a property called birefringence. Researchers made a new material that has a higher birefringence than any substance on Earth. Photo: Sam Million-Weaver

Light waves in the same beam traveling through a material with optical anisotropy will slow down more or less depending on polarization, a measure of the direction in which waves vibrate.

Human eyes cannot see polarization on their own, but the ability to alter the vibrational orientation of light is essential for LCD screens, 3D movies, lasers and lens filters. Most devices that change light’s polarization rely on materials with optical anisotropy.

The new material might also be useful in energy-harvesting photovoltaic cells or light-emitting diodes. In the future, the researchers plan to explore other properties of the new material as they also work to develop strategies to synthesize it in large quantities.

The project was a team effort involving researchers at multiple institutions with varied expertise. 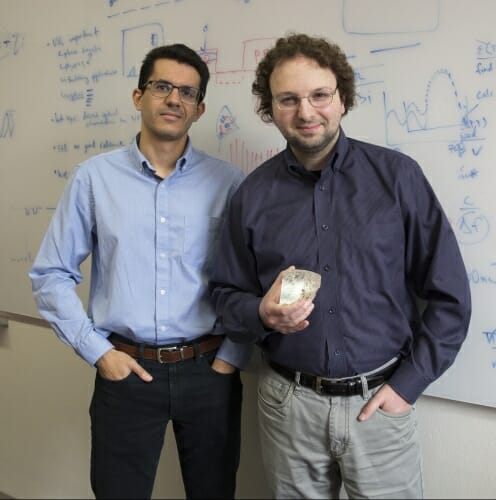 “This is a big success for collaborative science,” says Kats, who led the optical measurements, while Ravichandran and USC electrical engineering Professor Han Wang synthesized the material. “The wide array of knowledge and capabilities across our team enabled this breakthrough.”

The scientists are filing a patent on the material through USC and the Wisconsin Alumni Research Foundation at UW–Madison. Other collaborators included scientists at the University of Missouri and the Air Force Research Laboratory at Wright-Patterson Air Force Base.

THIS NEWS IS EMBARGOED BY THE JOURNAL NATURE PHOTONICS UNTIL 10 A.M. CENTRAL DAYLIGHT TIME ON JUNE 18, 2018