Each spring, a small group of students vies for the chance to become the most visible member of the UW’s Spirit Squad: Bucky Badger. This year, 14 tried out for the role of the university’s beloved mascot. A three-night audition — filled with equal parts fun and intensity — put their creativity, strength and humor to the test. And to truly become Bucky, students must be anonymous. They can’t talk, but their actions must speak louder than words. In the end, four new Bucky Badgers made the cut, joining three veterans who will return for another year of pushups, polka dancing and bringing joy to Wisconsin fans. 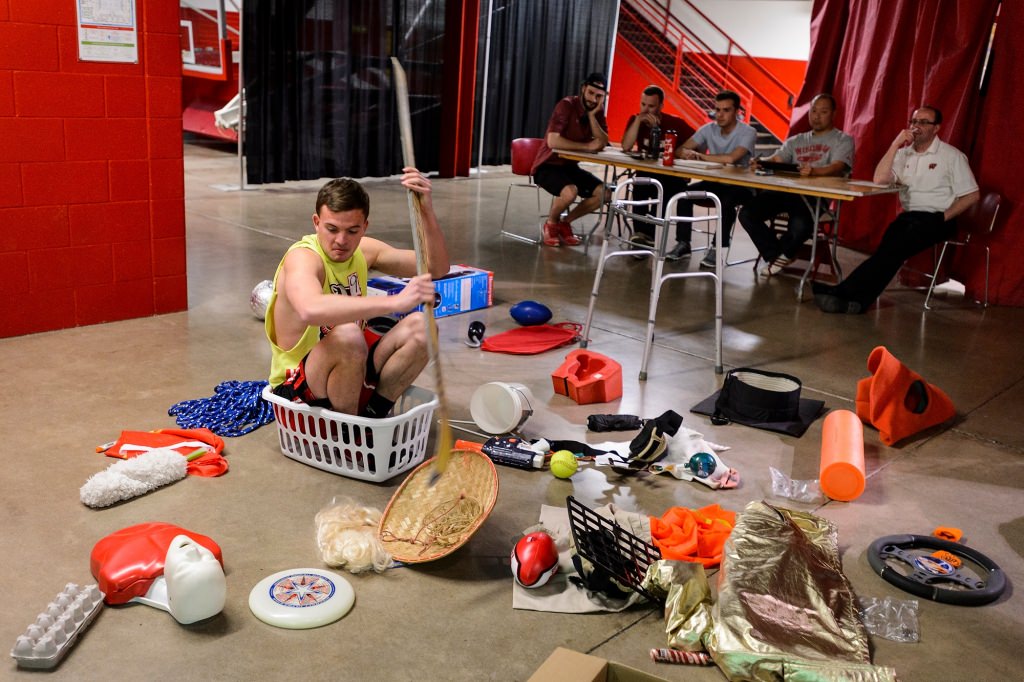 Improvisation is key to being Bucky Badger. Candidates are presented with a pile of props and must employ them in novel ways. In other words, don’t use the broom to sweep. Make it a guitar. Or use it as an oar to paddle a laundry basket across the floor inside the Fieldhouse, as freshman Tanner Pettit does. Photo by: Jeff Miller 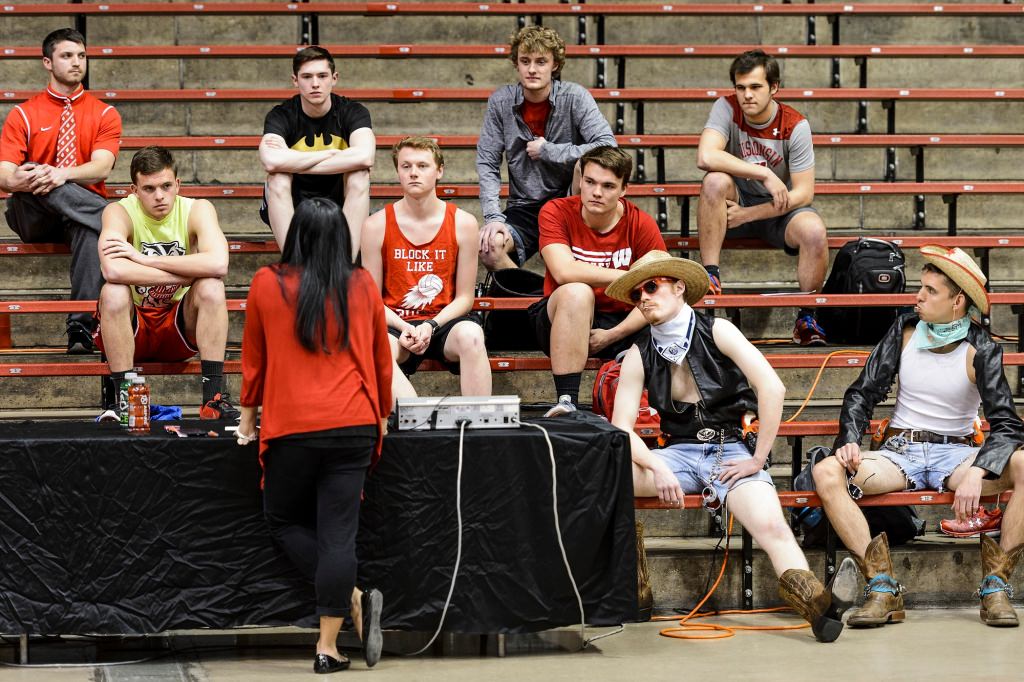 After their first year, Buckys must try out to keep their spot. Devin Deegan (second from right) and Seth Van Krey (right), display goofy cowboy swagger in a tradition that has emerged among returning mascots: showing up in costume for night one of tryouts. Photo by: Jeff Miller 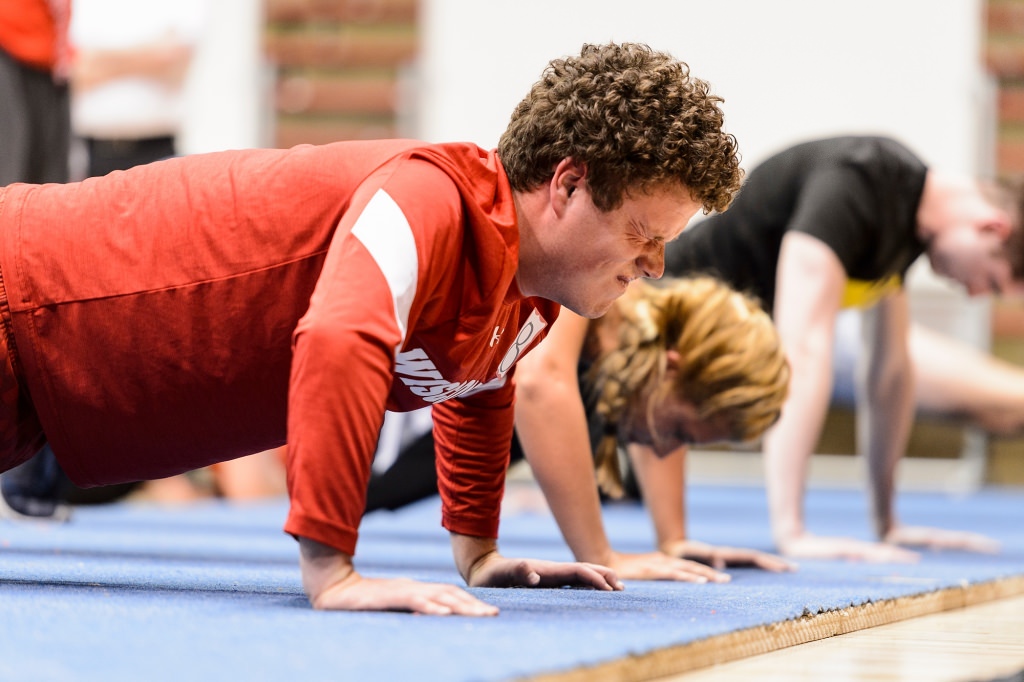 Bucky is called into service to count up the team’s points after every score at Camp Randall. Freshman Logan Pearlman works to complete his maximum number of pushups during the first night of tryouts. Photo by: Jeff Miller 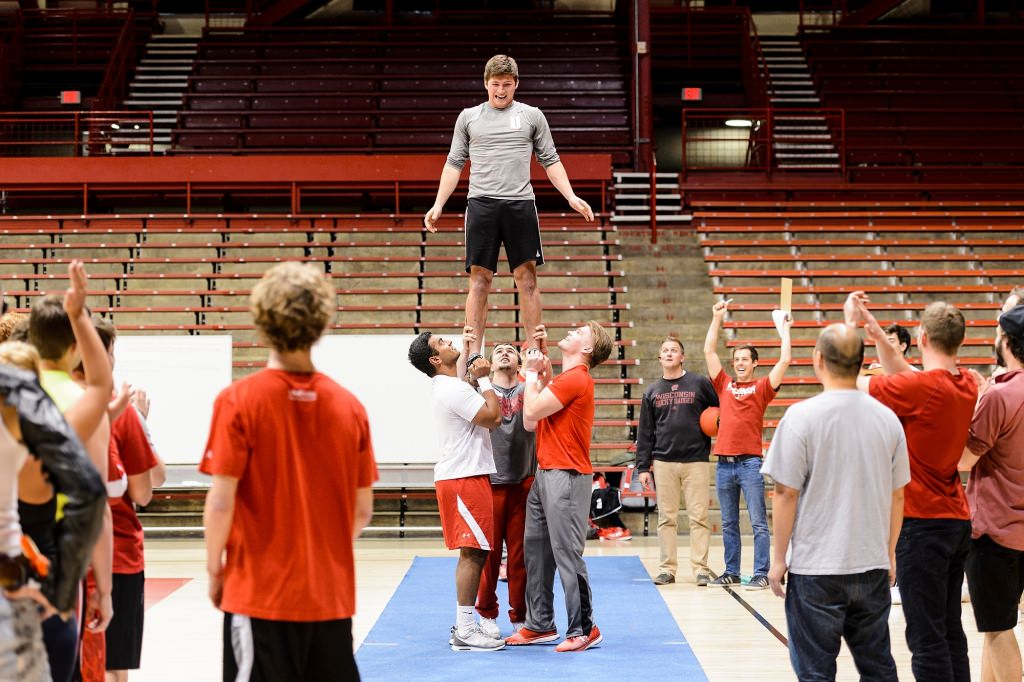 Sophomore Spencer Bernhardt breathes a sigh of relief after nearly losing his balance at the top of an “elevator” — a maneuver completed with help from two spirit squad members to rise to the top of a human pyramid. Photo by: Jeff Miller 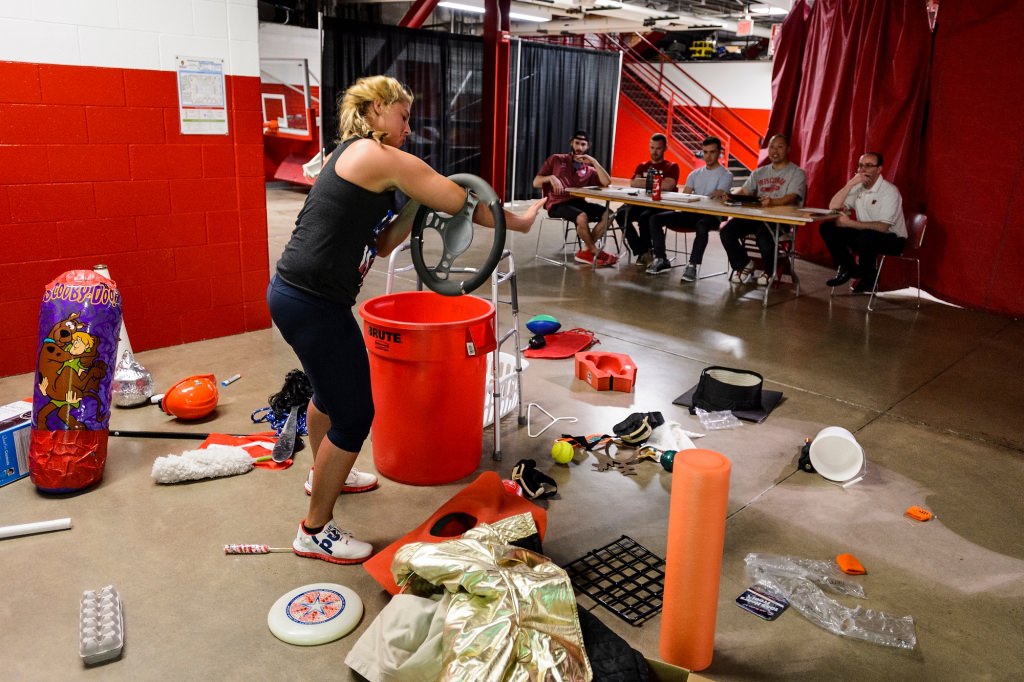 Freshman Katharine Previte — who played the role of Pirate Pete at Pewaukee High School — turns a steering wheel into a bracelet during her improv session with props. Photo by: Jeff Miller 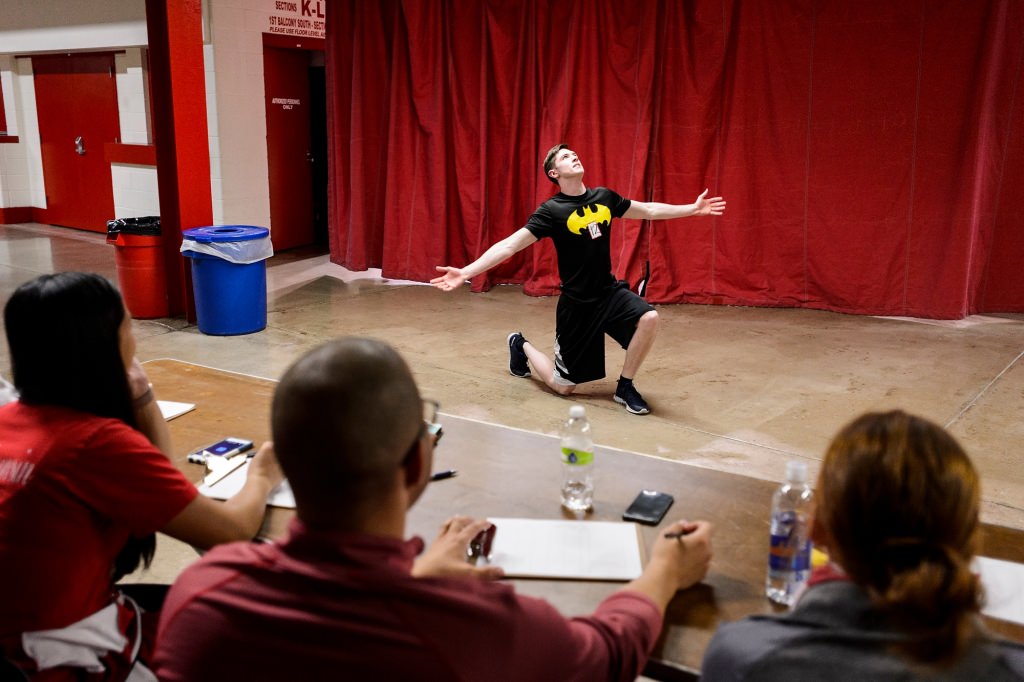 Judges watch as sophomore Kyle Thompson improvises a one-minute rhythm and dance routine that all prospective Bucky Badgers must complete — without the costume — to show their sense of rhythm (and humor). “I love to perform,” said Thompson. Photo by: Jeff Miller 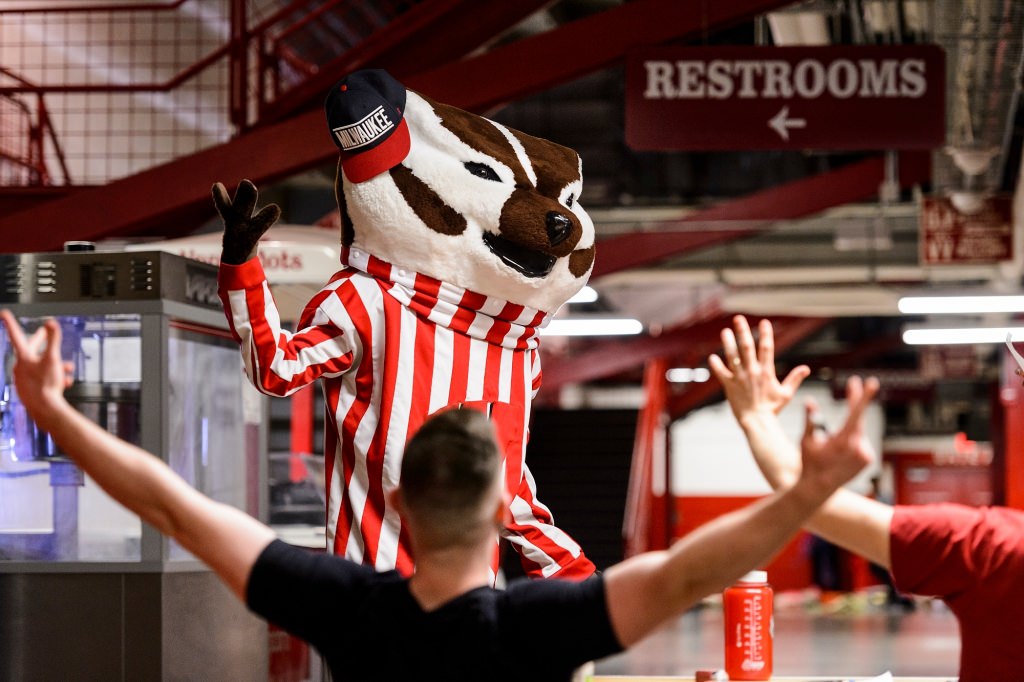 Big gestures make a big difference: simply putting on the suit doesn’t make someone Bucky Badger. How students handle themselves inside of the suit during a one-minute scene, with directions from a member of a panel of judges, helps determine if they have what it takes. Photo by: Jeff Miller 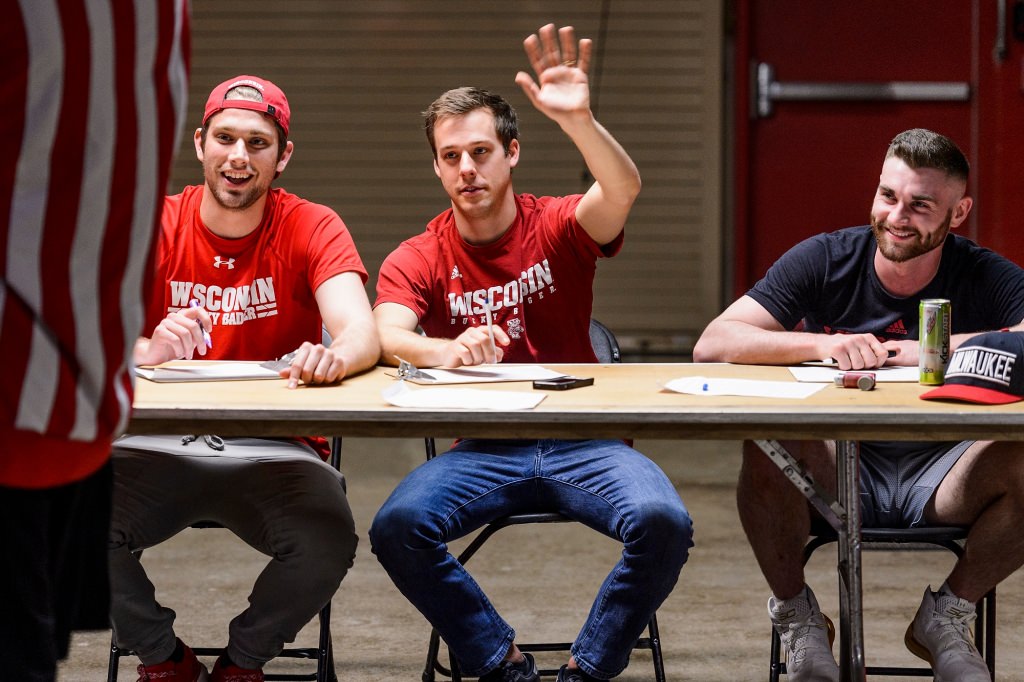 Former Buckys turned judges (left to right), Pat Smet, Keith Christensen, and Caleb Hunnicutt crack wise as they help select their replacements. Once candidates remove the Bucky head, they face questions about what sports they played in high school, as well as their chosen “spirit animal.” Photo by: Jeff Miller 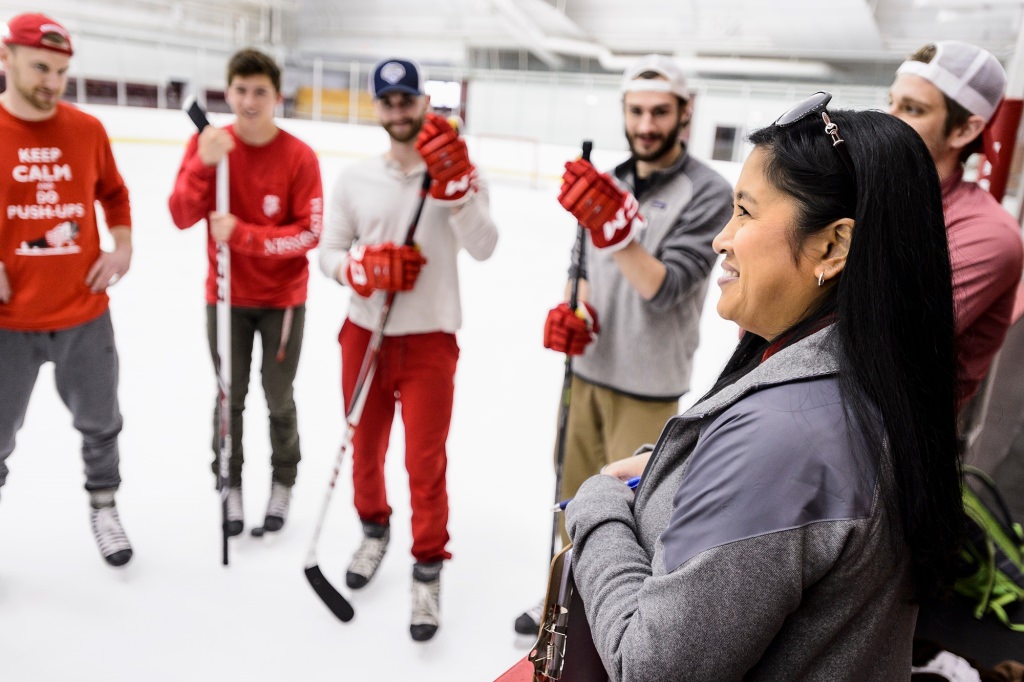 UW’s hockey teams need Bucky, too. Spirit Squad Director Josette Jaucian speaks with candidates and judges following an ice skating session at the Shell. The second night of tryouts included an obstacle course on the ice and taking shots on goal while wearing the top half of the suit, including Bucky’s heavy head. Photo by: Jeff Miller 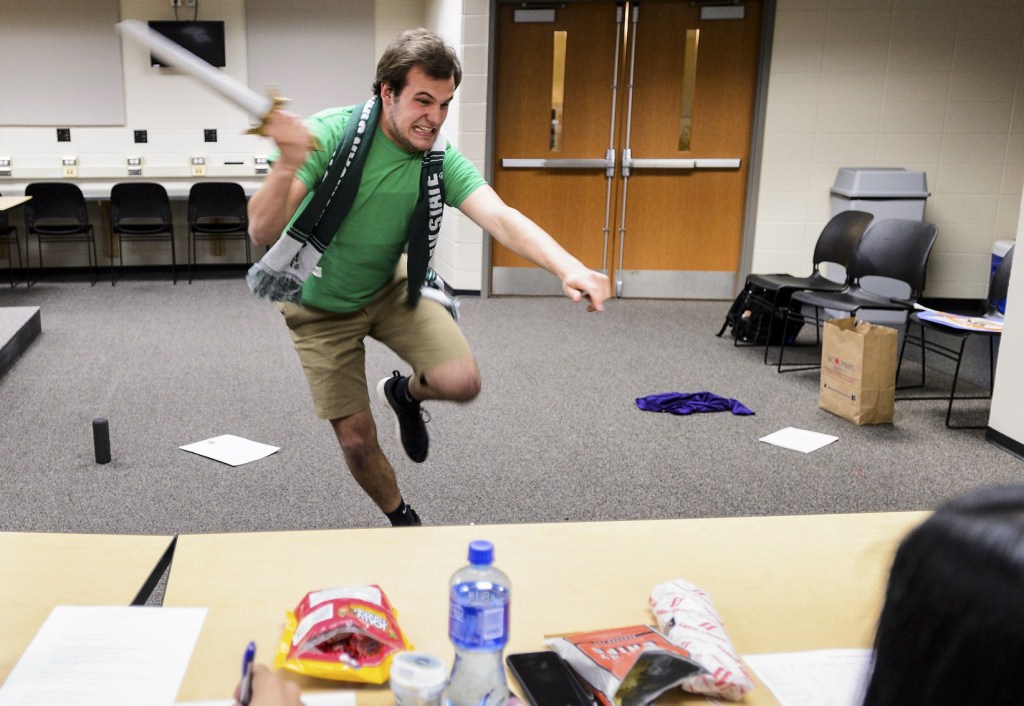 Nine students make it to the final night of tryouts, where they perform a two-minute skit, complete with homemade costumes. Freshman Keegan Gallup presents an homage to every Big Ten mascot, including Michigan State’s Sparty. Photo by: Jeff Miller 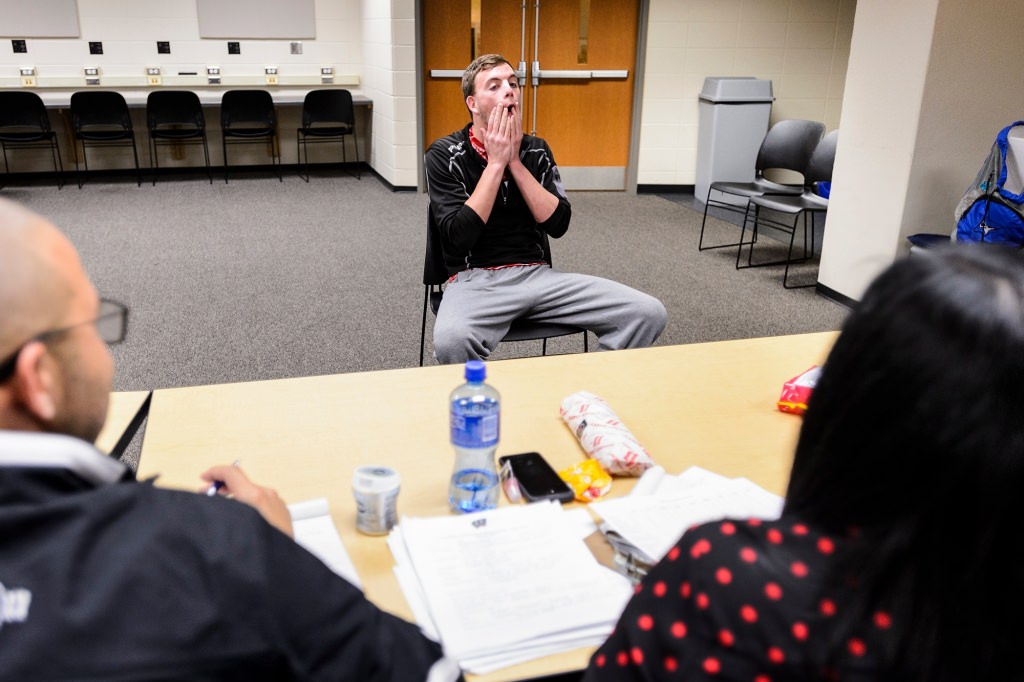 Tanner Pettit, who has previous experience in the role of the Easter Bunny, hesitates during a panel interview with judges as he struggles to name several key UW–Madison administrators and coaches. Photo by: Jeff Miller 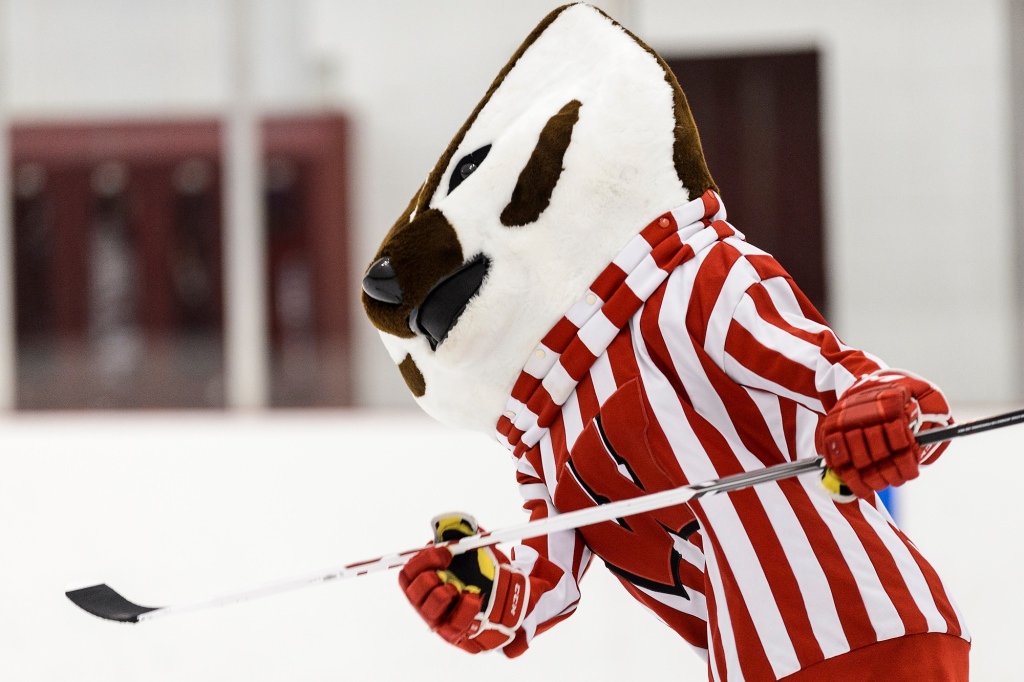 The final squad of seven Bucky Badgers will collectively appear at more than 700 events in a year from wedding receptions to football game days before a capacity crowd at Camp Randall. And in the end, the average Wisconsin fan won’t be able to tell one Bucky from another. Photo by: Jeff Miller