Jacob “Jake” Baggott, an accomplished and nationally respected leader in college health and well-being, has been selected to lead University Health Services.

Baggott, one of three finalists for the job, brings to the position more than 30 years of experience in college administration. He currently is assistant vice president for student health and well-being at The University of Alabama at Birmingham, where he was hired in 2013 to develop and implement a new comprehensive student health and wellness program. 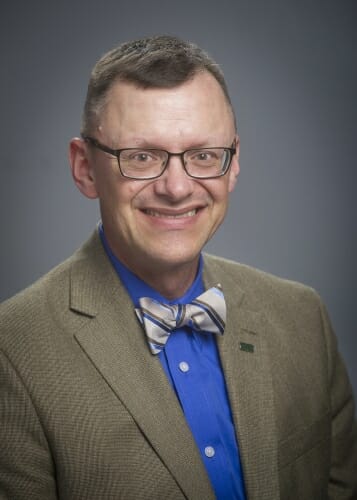 “Jake brings excellent knowledge and experience in college health care from his on-campus work at two other universities and his national leadership in ACHA,” says Lori Reesor, Vice Chancellor for Student Affairs. “His commitment to students, campus public health, and diversity and inclusion will serve UW–Madison well.”

Linda Scott, dean of the School of Nursing, served as chair of the 17-member search and screen committee.

UHS is the campus agency that provides UW–Madison students with health care services. As its executive director, Baggott will lead the development of university policies and programs that protect and promote the health of all members of the campus community.

Baggott grew up in Rudolph, Wisconsin, and moved to southern Illinois as a high school student. He credits the military for his path to higher education — he served two years of active duty in the U.S. Army, then 19 years in the Signal Corps of the Army National Guard. He is a retired first sergeant.

Baggott spent the bulk of his career at SIU, beginning as an undergraduate in the Student Insurance Office and rising to associate director of the Student Health Center and later chief of staff for the chancellor. His responsibilities at The University of Alabama at Birmingham include oversight of health, counseling, wellness prevention and promotion, campus recreation, disability support services and veteran support services.

During his presentation on campus as a finalist, Baggott said the UHS position is “a tremendous leadership opportunity in arguably one of the best programs in the country.” As demand for student health services escalates at colleges and universities across the country, there is much work to be done, he said.

“There’s opportunity to be innovative and think outside the box and do something uniquely Wisconsin that might set standards and raise the bar for the profession as well,” he said.

Baggott’s appointment is effective May 1. He will report to Vice Chancellor for Student Affairs Lori Reesor. He succeeds Sarah Van Orman, who left in June of 2017 to become the associate vice provost for student affairs and chief student health officer at the University of Southern California. Arnold Jennerman has been serving as interim executive director and Bill Kinsey as interim chief health officer.