Could a blood cell type responsible for scarring and diseases such as pulmonary fibrosis be repurposed to help engineer healthy tissue?

A new study by a University of Wisconsin School of Medicine and Public Health researcher shows that someday, fibrocytes may be used for regenerative therapies for people who need to have their vocal folds or other tissues rebuilt after damage or loss.

Nathan Welham, associate professor of surgery, and colleagues published their study of fibrocytes this week in the journal Science Advances.

In 2015, Welham created an artificial vocal fold that drew worldwide media attention. His laboratory used larynx cells from cadavers and surgical patients to grow transplantable tissue that created voice-like sound when vibrated. His current study arose from a search for other types of cells that could be easily harvested from a patient’s own body and grown to make new tissues.

“We were looking for a more versatile source of cells that can be easily obtained from people,’’ he says. “Fibrocytes are plastic — they can differentiate into different cell types and they can produce important components of tissue, such as collagen. So, we thought: ‘Wouldn’t it be easier to just draw blood, isolate the cells and direct them towards an engineered tissue target?’” 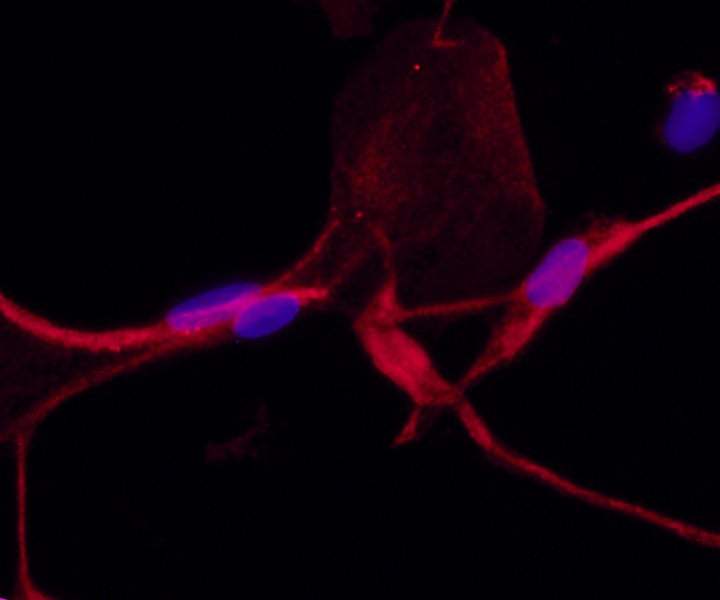 Mature fibrocytes, a type of mesenchymal cell derived from monocytes in bone marrow. Often thought of the “bad guys” of the body because of their role in scarring, a new study suggests they may be used to engineer healthy tissue to repair damage. Courtesy of Welham Lab 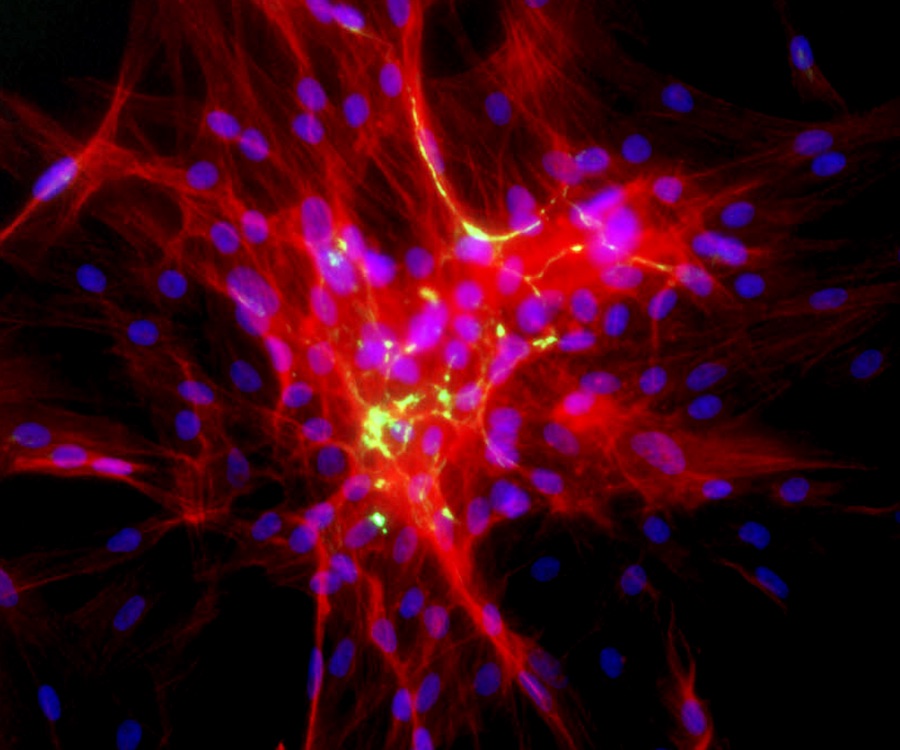 A high-magnification color image of a cluster of cells actively migrating to help close a wound, spurred by fibrocyte CXCL8 signaling. Courtesy of Welham lab 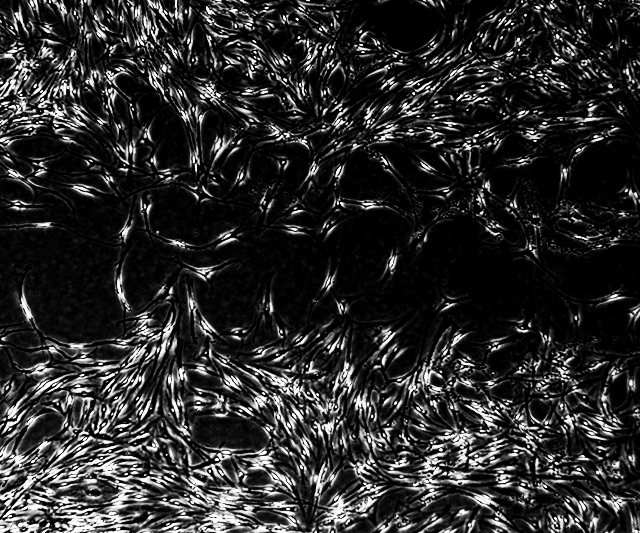 A black and white image of cells closing a wound gap, where fibrocytes promote cell migration to the wound in the presence of the molecule CXCL8. Courtesy of Welham lab 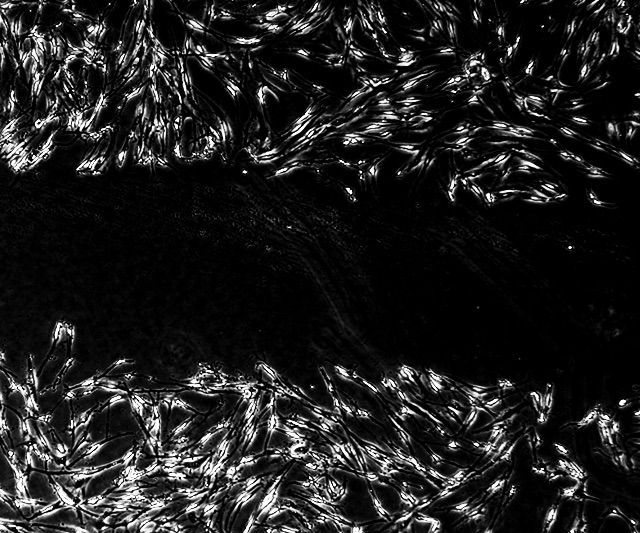 In the presence of a molecule called CXCL8, fibrocytes help recruit cells to a wound in an effort to heal it. When the molecule is blocked, the phenomenon is disrupted. Courtesy of Welham Lab

Welham’s group was already studying the role fibrocytes play in wound healing. Fibrocytes are seen as “bad actors” that lead to scarring. In the monocyte family of blood cells, they arise from the bone marrow and are usually found in low numbers in the bloodstream. But when the wound healing process begins, fibrocytes rush to the site of the wound. Some transform into the mesenchymal cells that make up connective tissue. Left unchecked, these cells can promote fibrosis, or scarring.

Until recently, the process by which fibrocytes differentiate from monocytes was “a black box and poorly understood,’’ Welham says. “We wondered if we could shed some light on the differentiation process and, additionally, use the resulting mesenchymal cells for a therapeutic purpose. Could these cells have a good side?”

One part of the study described how the fibrocytes go through a 14-day process of transforming from a round monocyte cell to an elongated mesenchymal cell. Next, they used proteomics to identify the proteins associated with this transformation. They showed that differentiation involves a complete retooling of cell metabolism, including greater dependence on a pathway called oxidative phosphorylation. They then compared the cells to other mesenchymal cell types, including cells obtained from skin, vocal fold, and bone marrow, finding that at the proteome level, they are distinct, although fibrocytes do have some mesenchymal features. 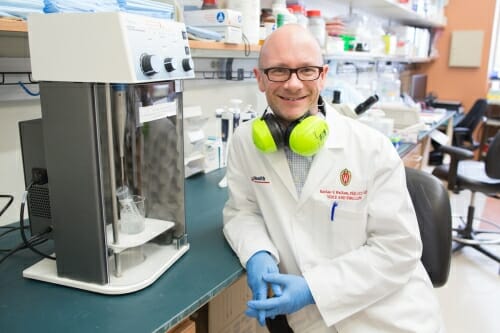 “The fact that (fibrocytes) show desirable mesenchymal features in certain situations means we might use them for good,” says Nathan Welham. “That’s a big shift in thinking.” Courtesy of Welham lab

Next, they tried using the mature fibrocytes to build multilayered tissues. They placed the cells within a scaffold to form a base layer, put epithelial cells on top, and found that the layer built from fibrocytes was able to support the maturation of a functional epithelium. They were less successful when they tried to also make the epithelium using blood-derived fibrocytes.

“We could get them part of the way there, but not all the way,’’ Welham reports. “They would never stratify and mature: We couldn’t grow the epithelium beyond a single layer of cells. It may not be possible, or perhaps we didn’t take the right approach.”

Another part of the study looked at the role fibrocytes play in wound healing.

“This also is not well understood,’’ Welham explains. “While fibrocytes are certainly associated with wound healing and fibrosis, it’s unclear whether they act directly, signal other cells at key phases of the healing process, or do both.”

In one test, the researchers simulated an injury and studied how local cells move in and repopulate an artificial wound. Through a series of experiments, they showed that fibrocytes send a protein called CXCL8 as a signal to spur the migration of local cells during wound healing.

“This study shows their potential,’’ Welham says. “It’s a paradigm shift. Fibrocytes are not just bad guys that cause terrible fibrosis. The fact that they show desirable mesenchymal features in certain situations means we might use them for good. That’s a big shift in thinking.”