At forum, praise for #MeToo — and a call for men to step up

A panel of experts took on gender bias and inequities Tuesday at a UW–Madison forum, providing timely context to the current national reckoning on sexual harassment and assault.

Several speakers referenced the #MeToo movement, praising it as a long-overdue corrective and noting that the phrase, which went viral last year, originated in 2006 with the work of black civil rights activist Tarana Burke.

“Violence against women is about oppression, so it’s no different than the issues of racism, homophobia, anti-Semitism,” said Elizabeth Santiago, executive director of the Center for Safety and Change, a New York organization serving victims of domestic violence and sexual assault. “When we base it on that, what we recognize is that, unless someone is standing up and speaking out, unless someone is willing to say #TimesUp, it’s not going to change.” 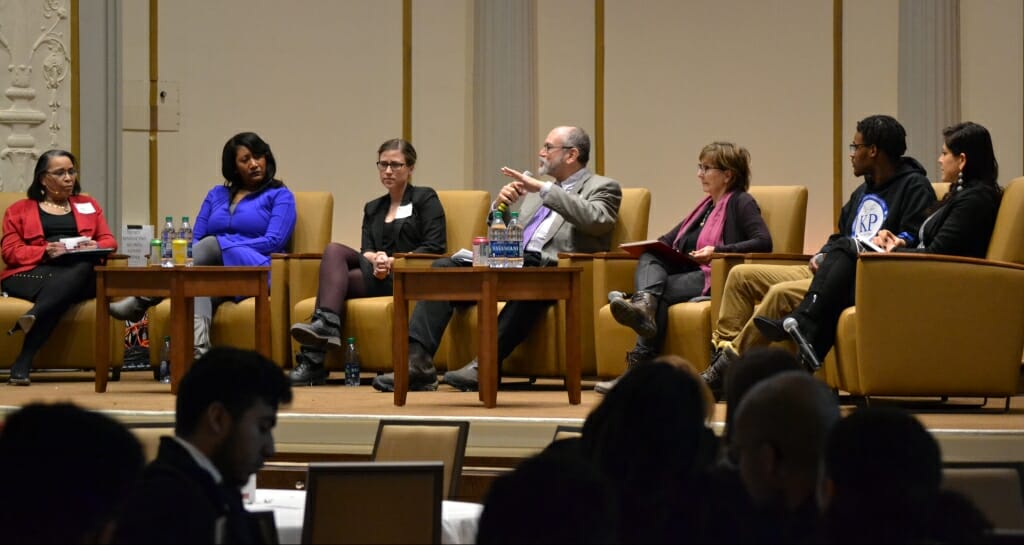 The speakers came together as part of an annual campus event called “Leadership in the New Economy,” or LiNE, hosted by the Division of Diversity, Equity, and Educational Achievement. The event seeks to help students become thought leaders — both on campus and in their post-graduation lives. It was sponsored this year by the UW Foundation Women’s Philanthropy Council and American Family Insurance.

This year’s theme was “Excelling Beyond: Moving to a Culture of Human Respect.” Just over 300 people attended the event at the Memorial Union, most of them students. 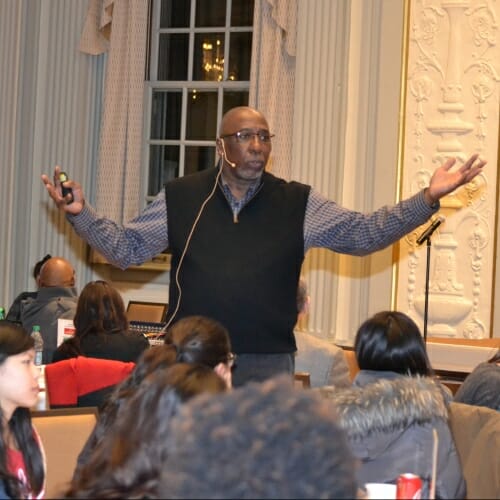 Tony Porter, CEO of “A Call to Men,” is internationally recognized for his efforts to prevent violence against women while promoting a healthy, respectful manhood. Photo: Valeria A. Davis

“Each and every one of you has the potential to change the world, because we know the power of one,” said Patrick Sims, vice provost for diversity and climate and UW–Madison’s chief diversity officer. “We know you will all be change agents who will make a difference.”

A goal of the evening was to inspire, encourage and advocate on behalf of women in the workforce. This includes men, too, said Tony Porter, a nationally prominent expert on the intersection of masculinity and violence against women.

“#MeToo is not just about empowering women,” he said. “It’s about men stepping up and saying, ‘And now we’re also going to be part of the solution.’”

He led audience members through the many insidious ways men are socialized to think of women as having less value, from a coach criticizing a boy by telling him he “plays like a girl” to T-shirts and song lyrics that objectify women and treat them as property.

“So much of how we define what it means to be a man is by distancing ourselves from what we perceive to be the experiences of women and girls,” said Porter, co-founder and CEO of “A Call to Men” a New York-based violence prevention organization that educates men on healthy, respectful manhood. 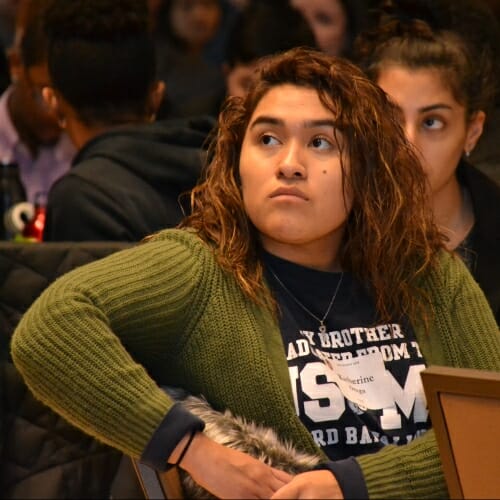 DDEEA Scholars participate in the LiNE development events, which this year focused on Moving to a Culture of Human Respect by exploring the dynamics of perspective, power, people, pay, playing fields and protection. Photo: Valeria A. Davis

He urged men to resist rigid gender stereotypes and said that while most men are not abusive, too many good men remain silent about violence against women.

During a wide-ranging panel discussion, Luis Pinero, assistant vice provost for workforce equity and diversity at UW–Madison, said that while it is important to use one’s voice to change social norms, being able to listen with an open mind to others as they tell their stories also is a critical skill to develop.

“Listening isn’t just so that you can hear something and then attack that person back and put them down or invalidate their perspective,” he said. “It’s, ‘Let me stop and suspend judgment and truly hear.’ Don’t filter that person out.”

Invalidating someone else’s story is one way oppression continues, said Megan McGarry, advisor for the Center for Educational Opportunity at UW–Madison.

“Any survivor, anyone who’s ever been oppressed, knows that you go out on a limb when you say something to someone,” she said. “To be believed — that is the biggest gift.” 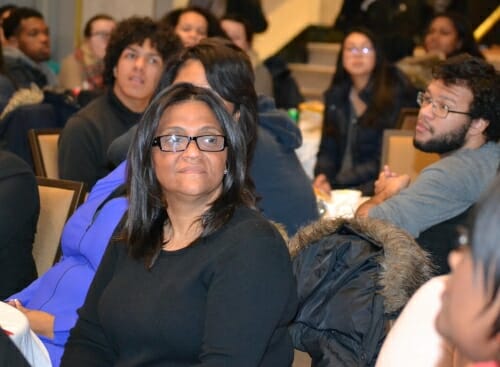 “A Call to Men” presentation co-facilitator Elizabeth Santiago is embedded in the crowd to keep a close eye on audience engagement and reaction. Santiago is executive director of the Center for Safety and Change in New York. Photo: Valeria A. Davis

Responding to a question about the need to create a level field for everyone, Dorri McWhorter, a UW–Madison alumna and CEO of YWCA Metropolitan Chicago, encouraged audience members to think in terms of creating an entirely new field, rather than trying to fix the existing one.

“It’s incumbent on us that, if things are not working, then we really look at how we create new models,” she said. “Clearly, systems are broken. That field has been established. It’s worn out to some degree. I think we have the ability to have new tools and do different things. We just have to challenge ourselves.”

Lauren Hasselbacher, who serves as Title IX coordinator on campus, repeatedly encouraged students to seek her out with their concerns, complaints and suggestions, and many did following the event. The Title IX coordinator is responsible for coordinating the university’s efforts to prevent sex discrimination from occurring and responding promptly and appropriately if it occurs. 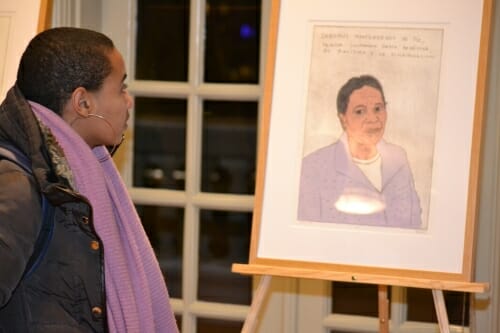 DDEEA Scholars had the opportunity to view artwork in an exhibit hosted by Kelly Parks Snider, creator of “Women Against Hate,” a collaborative, traveling exhibition and multistep “anti-hate” campaign. Photo: Valeria A. Davis

Santiago, a co-facilitator of the event, ended the evening by asking audience members to reflect on what they’d heard. “We want your voice to be the last word,” she said.

One female student said she looks forward to the day when the campus is so safe, “I will not have to walk with a pocket knife and pepper spray.”

Another woman said that while she appreciated the evening’s program, the challenge now is to get others to similar events. “We have to get the people here who don’t want to hear this stuff.”

A man who identified himself as a student-athlete committed to being part of the solution, saying he plans to use whatever platform he has to raise awareness of the topics discussed by the panel. “I definitely want to continue this conversation and move it forward,” he said.