At 2019 winter commencement, grads step into the ‘beautiful chaos’ that awaits Lydia Schultz attended the smallest K-12 school district in Wisconsin. At Washington Island High School in Door County, she was one of just five in her graduating class. So for college, of course she came to the University of Wisconsin–Madison, a campus of more than 45,000.

“Makes total sense, right?” said Schultz, laughing, at Sunday’s winter commencement. Her parents sat nearby. They came to the ceremony via ferry. (Well, the first leg of the trip, anyway.)

Schultz, who earned a bachelor’s degree Sunday in psychology and East Asian studies, had much more company this time on the graduation stage. UW–Madison conferred 1,770 degrees Sunday to undergraduate, graduate and professional school students. About two-thirds of those students, or 1,200, took part in the ceremony at the Kohl Center. Many others will participate in spring commencement in May. The total crowd at the Kohl Center, including graduates, was 7,379.

Chancellor Rebecca Blank told graduates she’s been following closely the national debate over whether a college degree is worth the cost. As an economist who has spent much of her life studying the U.S. labor market, she said she finds the question mystifying. 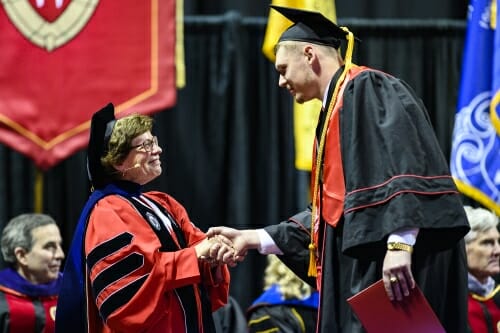 “Simply put, you have just made the best investment you will ever make,” she said, to applause. “The monetary returns on a college degree are higher now than they have been in the past 50 years. College graduates earn far more than non-college graduates. It’s clear that university training gives you skills that this global economy values more and more each day.”

That proved true for Mitali Soni, a master’s degree graduate from Maharashtra, India. In an interview, she said she sought out UW–Madison specifically because of its top five ranking internationally in her field of study, computer architecture. In January, she’ll start work at Google’s headquarters in Mountain View, California.

“I didn’t get just a good education here, I got a great one,” she said.

Keynote speaker Jason Gay, the sports columnist for the Wall Street Journal and a 1992 UW–Madison graduate in political science, stressed the messiness of life. Eleven years ago, he got sacked from Rolling Stone magazine.

It was 2008, the height of the Great Recession.

“I was handed a sad cardboard box and told to pack up my stuff,” he said. “It was barely a week before Christmas.”

He wouldn’t necessarily want to relive that moment — it was humbling, he assured the crowd. But it also was strangely exciting, he said. The experience led to some of the insight he imparted to graduates Sunday: We are not always in control of our stories. No one has life all figured out, and there is joy to be found in the unpredictability, he said. Embrace the uncertainty.

“My friends, you’re about to step out into this beautiful chaos,” he told graduates.

A former finalist for the Thurber Prize for American Humor, Gay wove plenty of laugh lines into his speech. One of the biggest came when he dinged the University of Michigan, a favorite target.

“I actually thought, for a moment, we might have some folks from Ann Arbor show up to protest my speech,” he said. “I thought that would be kind of cool. Then I remembered:  Michigan never shows up in Wisconsin.” 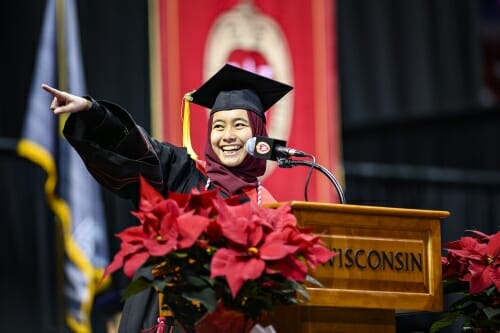 As a coping mechanism during tough stretches, she said she came to rely on the soundtrack to the Broadway musical “Hamilton.” She opened her talk Sunday with a slightly altered lyric from one of its songs, “The Story of Tonight:”

“There is everyday human experiences that give weight and substance to this certificate you are about to receive,” she told her fellow graduates. “Every sacrifice, every bit of energy you dragged out of you every morning — even if all you managed to do was scratch the bare minimum. You are graduating today. You did enough and I am proud of you. I am immensely proud of you.”

Janiece Piolet, a psychology and sociology double major from Chicago, said her time at UW–Madison wasn’t always easy but that she was filled with gratitude for the lessons she’d learned and for the many university employees — particularly those in Student Affairs — who kept her focused and motivated. As Piolet prepared to walk across the Kohl Center stage, she juggled mixed emotions.

“Part of me feels like it’s just another day,” she said. “But it’s the next day of the rest of my life.”