The following is a transcript of Capt. James A. Lovell Jr.’s address at the University of Wisconsin–Madison’s winter commencement at the Kohl Center on Dec. 18, 2016. 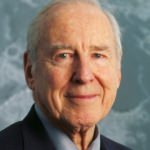 “Distinguished graduates of the University of Wisconsin, honored guests, ladies and gentlemen . . . I am extremely grateful to have this privilege to be here on such an important occasion in your lives.

“It was here when I started my Navy and space career. The time was 1946. World War II was just over. College was only possible when I managed to obtain a two-year Navy ROTC scholarship. I mixed in with all the returning GIs, an experience I will never forget.

“Graduation day is always a happy time filled with mixed emotions. But first I think we should give thanks to all those who have helped you along the way: your parents and in some cases your grandparents, for their love and financial support; your teachers, for their dedication and encouragement; and to your fellow classmates for their friendship and compassion.

“It is also a time to reflect what you have learned and to feel a sense of accomplishment – a time to say goodbye for now to the friends you have made and vow to keep in touch and see that your paths cross again. A time to briefly rejoin your families – even to sleep late for a day or two – while you think about the future and putting your newly acquired knowledge to work.

“I am sure that you have found, as I have observed, that the end of one experience is just the beginning of another. Because education is much like success – it is, in reality a journey, not just a destination.

“That journey will take you into a world that is in a very exciting and challenging period of evolution.

“In a political, social and economic sense, there has been a great upheaval in the world these past four decades.

“For example, the technical revolution boggles the mind. We are in the era of the domain of ones and zeros; the digital world.  An age of instant communication and a universe of knowledge at our fingertips with just a click on the keyboard.

“At the same time, we have seen the sudden demise of a world power, the sprinkling of democracy in eastern Europe and even a brief Arab spring easing our tensions only to be followed by a wave of religious fanaticism, a wave with no boundaries like a virus with no cure.

“To top it off, the lack of government oversight a few years ago allowed the overleveraging of our financial institutions and threw us into a recessionary period that took years to recover.

“So the future you inherit will require all the initiative, perseverance and motivation you can muster to find a secure position in the workforce.

“It is also a period that cries out for effective leadership because the world is still full of opportunities for those who are looking to succeed.

“Your first step is to put to work the education that you have acquired. In too many instances, an educational institution has become like the lamppost on which the drunk leans for support, having no interest in its light. So it is that many people consider their college academic achievements just another pin in the calendar of life.

“But the education you have received here is not enough. To tackle the future you face, you must mix in what I call a little foresight – a quality that has been lacking in this country. Now, what do I mean by foresight?  I can best explain it by quoting a most unlikely source: a friend of my son’s when he was young, Dr. Seuss.

“Now although he wrote for children, this paragraph has meaning for all and it goes something like this:

From beginning to end, from the start to the close.

Because ‘z’ is as far as the alphabet goes.

Then he almost fell flat on his face on the floor.

When I picked up the chalk and drew one letter more.

In the places I go, there are things that I see,

That I never could spell if I stopped with the ‘z.’

“Most of the world has resisted looking beyond ‘z’ to the bitter end. Every major advancement of civilization has met with extreme resistance. I think societies’ outlook on change is aptly described by Arthur Clark, a distinguished British physicist and science fiction author.

“He said there are three phases of a good idea:

“History is full of examples where this is so.

“Listen to the comments made by famous people who could not see beyond ‘z.’  In 1899, Charles Duell, the director of the U.S. Patent Office, said, ‘Everything that can be invented has been invented.’ In 1905, President Grover Cleveland uttered this gross misconception: ‘Sensible and responsible women do not want to vote.’ Scientist and Nobel Prize winner in physics Robert Millikan should have known better when he stated in 1923, ‘There is not a likelihood man can ever tap the power of the atom.’

“In my own field as late at 1957, a scientist and radio pioneer inventor, Lee de Forest, made this famous quote: ‘Man will never reach the moon regardless of all future scientific advances.’ And that was just 11 years before I circled the moon on Apollo 8.

“Now fortunately, there were those in days gone by who refused to live in the ‘a’ to ‘z’ world.

“They wanted to see what was beyond ‘z.’ Imagine the world we would live in if men such as Socrates, Columbus, Erickson, Magellan, Einstein, Pasteur, Sabin and countless others had decided not to expand their horizons.

“Now I have seen what foresight or thinking beyond ‘z’ has accomplished in the science of space. But each of you pursuing your college education in your own particular field in challenging times can also think beyond ‘z.’ You can dream and create and make your contribution to the future of mankind in this world.  It will not always be clear that applying your knowledge and foresight will produce immediate results. There is a shortsighted tendency in all of us to cancel our long-range goals if we cannot see immediate returns, but we must commit ourselves to long-range goals if we are to succeed.

“You will be amazed at what you can do. My mother could hardly believe that I circled the moon in 1968, but today, my 50-year-old son doesn’t think it’s any big deal because, after all, we had done it as long as he can remember. Your generation will stand on a higher hill because of the mountains that we have climbed and the whole world benefits from your ready acceptance of it. If you can take our accomplishment as commonplace, then think of the new horizons that you can see beyond. From your vantage point, your education and imagination will carry you to places which I would not believe possible.

“Every generation has the obligation to free men’s minds for a look at new worlds. To look out from a higher plateau than the last generation.  Your vision is limited not by what your eye can see, but what your mind can imagine if you only go beyond ‘z.’

“A moment ago I said it was up to everybody to build a better world.  I really mean that. When I circled the moon and looked back at the Earth, my outlook on life and my viewpoint of Earth changed. By holding up my hand at arm’s length, I could completely blot out our planet with my thumb, and I suddenly realized how insignificant we all are. My impression of Earth was one of an incredibly beautiful blue and white ball, much like a Christmas tree ornament, hung in an absolutely black sky. You see the blue of the water and the white of the clouds.

“You don’t see Los Angeles, or even New York. You don’t see boundaries or people. No whites, no blacks, no French, no Greeks, no Christians, no Jews. The Earth looks completely uninhabited, and yet you know that on spaceship Earth there lives over 6 billion astronauts all seeking about the same things from life. When viewed in total, Earth is a spaceship just like Apollo. We are all the crew of spaceship Earth and, just like Apollo, the crew must learn to live and work together. We must learn to manage the resources of this world with new imagination.  The future is up to you – just look beyond ‘z’.

“And try to remember occasionally poor Conrad Cornelius O’Donald O’Dell that he almost fell flat on his face on the floor when I picked up that chalk and drew one letter more. In the places I go, there are things that I see, that I never could spell if I stopped with the ‘z.’

“Good luck and godspeed in your future endeavors.”