Images from before and after the bluff failure in Mt. Pleasant, Racine County, Wisconsin. Panel A: August, 2016; Panel B: December, 2016; dashed line shows bluff edge before failure. J. Elmo Rawling

With the level of Lake Michigan at the highest in 25 years, wave erosion at the bottom of the lakeshore bluffs has started to translate into collapses at the top.

And as landowners and municipalities along Wisconsin’s eastern shore look nervously east, some help is arriving from the Wisconsin Geological & Natural History Survey and UW–Madison.

The lake is six to 10 feet above the average between 1917 and 2018, says J. Elmo Rawling, a geologist with the survey. “The slides are beginning, and we are now dealing with recession at the bluff tops. Already, several structures have been removed in Racine County, and people are more and more concerned.”

Rawling and Lucas Zoet, an assistant professor of geoscience at University of Wisconsin–Madison, are more than one year into a project sponsored by Wisconsin Sea Grant aimed at a better understanding how the bluffs erode, and what triggers their collapse.

Lake Michigan’s level is not controlled by a dam, but rather by rainfall minus evaporation and water flowing out through the St. Clair River.

Since the last high level 25 years ago, “that’s an entire career at the DNR, the university, local managers, and landowners,” says Rawling. “There is not a lot of day-to-day practical expertise, experience, with bluff failure.”

To beef up understanding of the issue, Rawling and Zoet have installed instruments to measure movement in the bluffs, drone-mapped the bluff faces and drilled wells to monitor groundwater.

The data will be used to build a computer model of bluff movement that will be available to municipal governments and agencies through the Wisconsin Coastal Management Program.

Ideally, the model will serve as a sort of early warning network, and support advice on tactics, such as preventing water from ponding on the bluff, that may inhibit collapse.

The Wisconsin Geological & Natural History Survey, an independent agency with roots tracing back to 1853, is now part of University of Wisconsin Extension. Extension, in turn, is rejoining UW–Madison.

“This is a natural collaboration between two branches of UW–Madison,” says Rawling. “The geoscience department focuses on research into global issues, while we focus more practically on Wisconsin. We both bring expertise and instrumentation to this issue.”

In addition to the lake study, the Geological Survey works on issues related to groundwater, water wells, mining, fossils, maps, and other aspects of natural history. Its vast store of data is helpful in agriculture, transportation, planning and development.

Bluff collapse begins when waves erodes the toe of the bluff; causing unsupported sections of the face to slide off, bringing the face closer to vertical. “Once the bluff is in an oversteepend position, the thing most likely to cause it to fail in a landslide is the water table going up,” Zoet says. Thus the three groundwater wells drilled this January in Warnimont park in Milwaukee are key to understanding landslides. 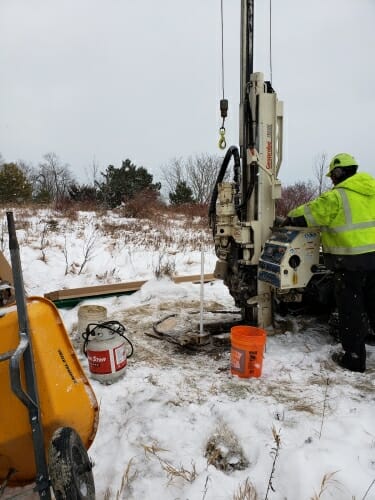 Groundwater does not lubricate material in the bluff, but it reduces the ‘grip’ between particles by relieving pressure, thus enabling slides.

The geologists’ ultimate goal is to make a mathematical model of bluffs and landslides, says Zoet. “This involves a system of equations that will allow us to better predict when landslides will occur, based on factors that make them more likely. The model needs to account for the shape, size, composition of the bluff, and the state of erosion at the base.”

The group uses what it calls a “Badger” (Bluff Assessment Data Generating Experiment Recorders) to register movement with a wire stretched from solid land to the bluff face, and connected to a sensor that can track movement up to 10 times a second.

Other data for the bluff-failure model comes from a drone-mounted camera that grab images of the bluff face that are digitized and turned into topographic representations of the face. Visual observations gathered by UW–Madison geologist David Mickelson during the 1970s record the composition of the bluffs – rock, clay and sand.

The lake will eventually recede, but even then, the landslide hazard will not immediately abate, Rawling says. “It takes several years for a change at the toe to impact crest line, so even if the lake goes down, we expect some further erosion.” 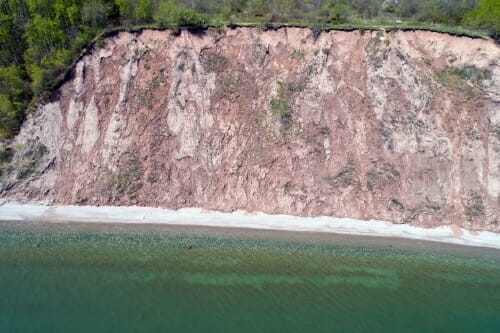 What’s bad for the bluff can be good for the beach, however. “We know that when the bluff fails, it delivers sediment to the near shore, including the beach,” Rawling says, “and we are ultimately trying to quantify the amount of sediment that comes off a given bluff.”

These deliveries can be substantial. One property, with a frontage of less than 100 yards, dumped an estimated 60 dump-trucks worth of sediment between May and September of 2018 – and that was during a quiet period of the lake, when wave action is minimal. Storms can bring waves of 11 or 12 feet high – producing massive erosion, Rawling says.

Geology, like other sciences, often advances through incremental steps, but the current project may be an exception, says Rawling. “We have not had this issue for 30 years, so we’ve not applied new technology to the problem since the 1990s. Thirty years ago there was no sophisticated GIS or GPS (geographic information systems or global positioning systems), and the internet was barely a factor. There were no drones. Now, we can very rapidly acquire wave data, and use affordable, sophisticated instruments for monitoring groundwater, which may be the largest single variable explaining bluff collapse.”