During another time in which Earth warmed rapidly in conjunction with a spike in atmospheric carbon similar to our modern climate, seawater temperature and chemical changes decimated an important piece of the food web in the tropical Pacific Ocean, according to new research from the University of Wisconsin–Madison.

Planktonic foraminifera are single-celled ocean organisms known for making intricate shells which aren’t just the size of a grain of sand, they often are grains of sand on ocean floors and beaches. Planktonic foraminifera evolved approximately 180 million years ago, and they’ve spent all that time evolving further, while dying off and sinking to the bottom of the ocean, where their distinctive shells pile up to form layer after layer of sediment. 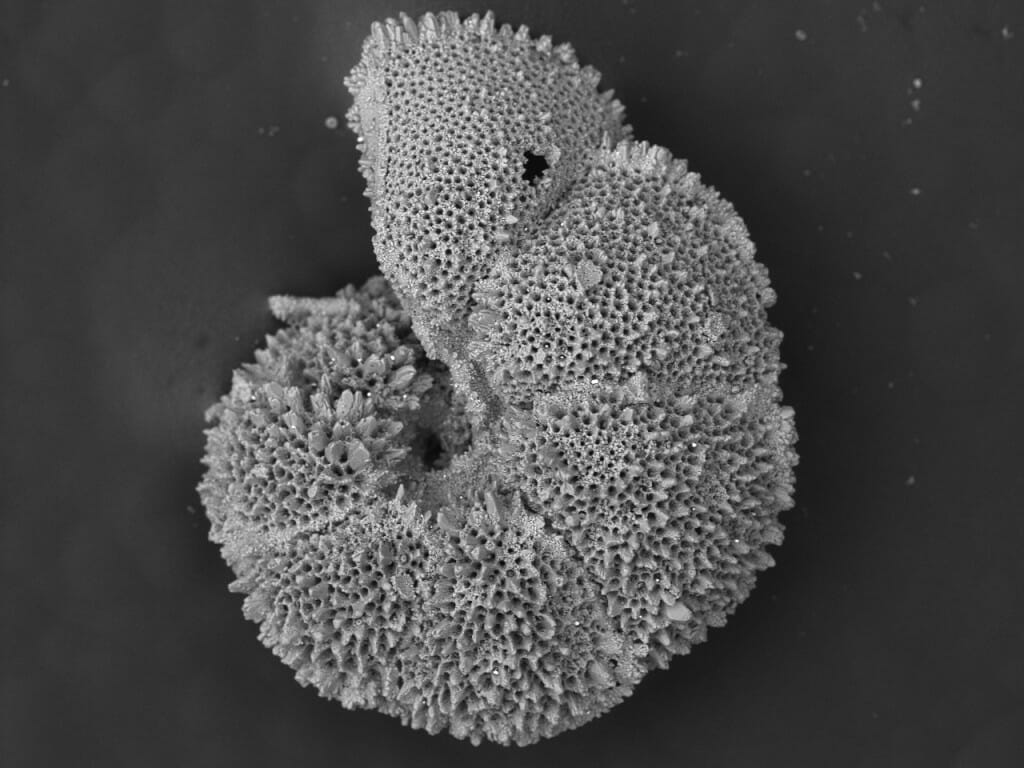 The carbon composition of sand grain-sized shells left behind 56 million years ago by single-cell ocean organisms called foraminifera — like this one from foram species Morozovella allisonensis — helped UW–Madison researchers describe a likely catastrophic collapse of the marine food web during a global warming very similar to the one we are embarking on now. Image by Brittany Hupp

Foraminifera were around 56 million years ago during an event called the Paleocene–Eocene Thermal Maximum (the PETM), when atmospheric chemistry and carbon dioxide levels changed abruptly — as they are today — and global temperatures warmed rapidly by 4 to 5 degrees Celsius.

“Foraminifera are pretty sensitive environmental indicators. I think of them as canaries in the coal mine,” says Clay Kelly, a UW–Madison geosciences professor and one author of a new study of the PETM published recently in Proceedings of the National Academy of Sciences. He also notes that “the PETM is arguably our best ancient analog for future climate change.”

In the 1990s, Kelly published descriptions of the foraminifera found in deep-sea sediments dating to the time of the PETM. They were recovered from atop an extinct submarine volcano in the middle of the Pacific Ocean. What he found, by meticulously separating and examining foraminifera shells, was a surprising expansion of the number of species living near the equator in an ocean that was getting hotter, more acidic and less oxygen-saturated.

But the onset of the PETM happened fast, geologically speaking, over less than 5,000 years. Over that time, ocean currents and the burrowing activity of bottom-dwelling organisms churned and blended ocean floor sediments so that the microscopic shells of foraminifera were pushed up or down in the muck, leaving their eventually fossilized remains sitting next to ancestors or descendants 10,000 years distant. 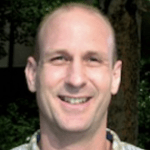 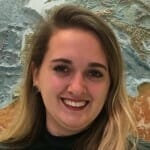 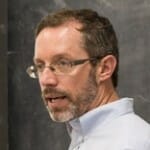 “That reworking can leave 20 centimeters of a sediment core all mixed up, so that some foraminifera deposited in the sediment much earlier appear to have been living thousands of years later,” says Brittany Hupp, a coauthor who worked on the study while earning her doctorate in geosciences at UW–Madison and is now a postdoctoral researcher at Oregon State University.

Hupp used the sharp change in atmospheric chemistry (and the upper layers of the ocean, where planktonic foraminifera live) to untangle the reworking of the sediment and came to a much different conclusion about the response of foraminifera to PETM conditions.

The PETM is marked in the rock and fossil records by a global carbon isotope excursion, in which an isotope of carbon became much more common in the atmosphere. Istotopes are atoms of a single element that have slightly different weights. The isotope the researchers studied is called carbon 12.

“Carbon 12 is a stable isotope, meaning that it does not undergo radioactive decay like its sister isotope carbon 14, and stays relatively concentrated in organic materials such as coal and hydrocarbons that spent a lot of time buried in the earth,” Kelly says. “We’re digging it up right now as fossil fuels, burning it, and releasing it at an unprecedented rate into the ocean-atmosphere system.”

“Foraminifera are pretty sensitive environmental indicators. I think of them as canaries in the coal mine.”

“Diversity dropped markedly at the site of this sediment core,” Hupp says. “We go from having nine major taxa — representing about 90 percent of the foraminifera — down to four. So, over half the species disappeared from this site during this warming period.”

But they didn’t go extinct. They probably migrated out of the hot tropics to find cooler waters. The species that disappeared from the equator were still found in higher latitudes. In fact, other studies show some of the equatorial species popping up in polar regions during the PETM.

“In the PETM tropics, their population dynamics change so dramatically,” Kelly says. “We saw a lot of them leaving the tropics, and that would have altered the food chain substantially during the PETM event, which has so much in common with warming now.”

Because they are the first consumers of single-cell plants near the bottom of the food chain, the foraminifera’s absence from their normal home ranges would have been catastrophic. That may be the case in our near future as well.

The researchers, who include UW–Madison co-author and geography professor John “Jack” Williams, also noticed changes in the foraminifera shells likely due to ocean water becoming more acidic as it soaks up extra carbon from the atmosphere. Acidification makes it harder for foraminifera to grow their shells.

“But they are, by far, not the only organisms living in the ocean that have shells built of calcium carbonate,” Hupp says. “So, a lot of the pressures that planktonic foraminifera experienced during the PETM are going to affect many other important organisms that build those shells today.”