An ounce of prevention: Research advances on ‘scourge’ of transplant wards 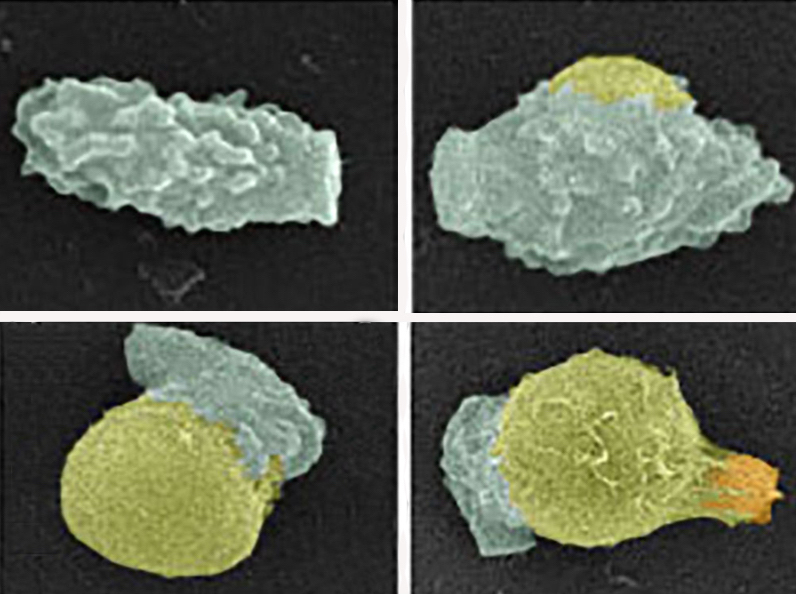 A spore of the deadly human fungal pathogen Cryptococcus (green) germinates into a yeast (yellow). Germination takes about 16 hours. Afterwards, the new yeast begins to reproduce by forming a bud (orange).

The fungus Cryptococcus causes meningitis, a brain disease that kills about 1 million people each year — mainly those with impaired immune systems due to AIDS, cancer treatment or an organ transplant. It’s difficult to treat because fungi are genetically quite similar to humans, so compounds that affect fungi tend to have toxic side effects for patients.

Now, in one of the most detailed studies of how a dormant fungal spore transforms itself into a disease-causing yeast, researchers at the University of Wisconsin–Madison have identified 18 proteins that play a role in spore formation and germination. The findings raises the possibility of preventing the disease by blocking the spores’ germination.

Spores are tough, resilient capsules that are made via sexual reproduction on trees and in soil that can remain dormant for years. Cryptococcus spores are apparently harmless until they are dispersed by wind or water and find a suitable environment where they can transform themselves into a yeast cell.

“When you inhale a spore, if it can’t grow, it can’t cause disease,” says study leader Christina Hull, an associate professor of biomolecular chemistry. “Spores are dormant; they hang out until they find a place to grow into yeast, and the human lung is a good place. From there, the yeast can travel to the brain.”

Once symptoms of cryptococcal meningitis appear, “the patient has billions of Cryptococcus yeasts growing in the brain,” Hull says. “If you could prevent spores from activating, that might be a preventive therapy for immunocompromised patients so even if they inhale a spore, it cannot grow. That could be huge.”

The study provides a rare look at a common process that is essential for disease transmission. Until now, Hull says, “it’s been very difficult to isolate Cryptococcus spores from other cell types, so people have not spent much time looking at the issue of germination.”

The transformation from spore to yeast “requires a change from one cell type to another, so many things must happen,” Hull says. “Spores have a thick, protective coat that they must break down. What molecules allow that to happen? Now we can start to parse out exactly what it takes for a spore to turn into yeast.”

“If we develop drugs to stop fungi from making the transition from dormant spore to growing yeast, we can prevent disease in vulnerable patients and ultimately save lives.”

The researchers deleted the genes for the 18 proteins in question and studied the resulting mutants. Hull was surprised to discover that most of the genes are involved in the process that forms a spore in the first place.

As the mutant spores grew, one gene that is necessary specifically for germination attracted additional attention. Already, Hull and colleagues are screening candidate drugs — or, ideally, drugs that are already on the market — at the Small Molecule Screening Facility on campus, looking for something that interferes with germination.

Hull is funded by The Hartwell Foundation of Memphis, Tennessee, to find treatments for fungal diseases, including some forms of childhood asthma. She says the results reported today may also apply to the kind of asthma caused by mold — a common term for some fungi. “Increasingly, we are seeing that allergic asthma can be caused by fungi,” Hull says. “If we can understand how fungal spores germinate, we could make some advances in treating — perhaps even preventing — some types of childhood asthma.”

Scientific progress takes time, Hull says, but technical improvements developed by Coon, an expert in high-precision mass spectrometry, and David Beebe, who invents microscale fluid flow devices, are allowing experiments once considered impossible. “I’ve been working on the basic biology of Cryptococcus since 2000,” she says. “By marrying basic research discoveries from my laboratory with technological advances of my collaborators, we now have an exciting opportunity to identify and develop antifungal compounds that inhibit spore germination.”

It’s the old story about an ounce of prevention, Hull says. “If a spore enters the lung, it’s not going to cause disease unless it can grow. If we develop drugs to stop fungi from making the transition from dormant spore to growing yeast, we can prevent disease in vulnerable patients and ultimately save lives.”