Amazing summer internships: 7 students tell what they did, what they learned, and what they’ll never forget

Each summer, hundreds of UW–Madison students spread out across the globe for internships. They gain vital job skills — that’s a given. They also explore new cities, discover foreign cultures, and have a lot of fun. We caught up with seven students to learn a little more about their experiences. 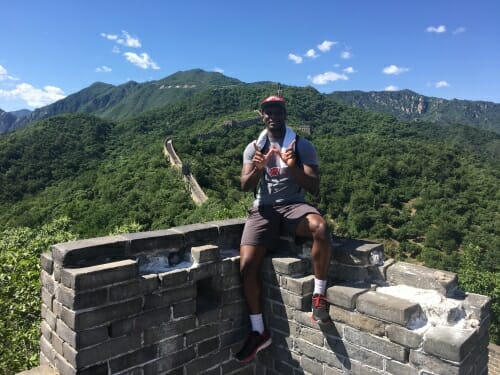 Senior Paul Jackson II, a mentor and tutor on campus, wanted to boost his teaching skills and give them a try in another country. During his internship, he spent a month in China teaching English to children ages 3 to 15.

One of his biggest cultural takeaways came from creating lesson plans to help students with their speaking and comprehension skills.

“I witnessed how devoted Chinese parents are when it comes to their children’s educations,” he says. “They follow up not just with their children but with the teachers.”

He also devised advertising and marketing materials to recruit new students to the school. Often those recruitment efforts involved art and athletic activities. Jackson knows a lot about the latter: he’s a linebacker for the UW football team. (Upon returning to Madison, he went straight from his overseas flight to Camp Randall for strength training.)

The trip was Jackson’s first abroad. It was a mind-expanding experience for both him and his students, he says. “They rarely see any black people where I taught, and for some children, I was the first American they’d interacted with.”

Bonus perk: Standing on the Great Wall of China. 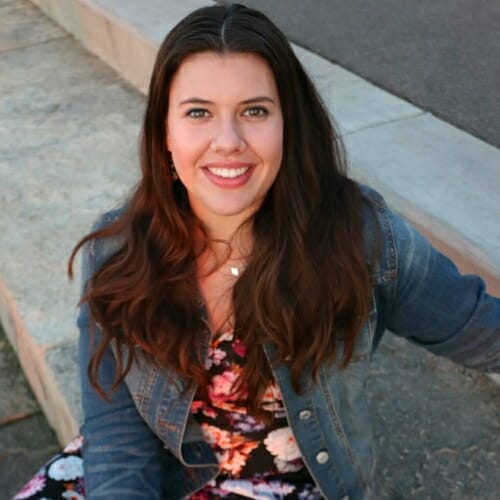 What little awareness Anna Dunn had about Slovakia before her internship came from the 2005 horror movie “Hostel,” set in the Slovak Republic. In hindsight, the movie portrays the country — and central Europe in general —  in an untrue light, she says.

“Once you get to know someone from Slovakia, they’re very kind, funny, warm and welcoming,” says Dunn, who graduated in August. “Most people are also extremely courteous. Much of the communication in public, like in a store or on the tram, takes place in the form of non-verbal cues. That took me a couple of weeks to adjust to.”

As an intern for the renowned Fulbright international exchange program, Dunn edited and created materials such as a handbook and fact sheet for U.S. scholars coming to the country. She also helped organize and evaluate applications from Slovak and U.S. scholars seeking Fulbright scholarships. And she put together a presentation on UW–Madison for local high school students learning about the U.S. higher education system.

“I noted a lot of wide eyes and brief looks shared between friends when I brought up the 40,000-student population, the number of majors available, the amount of research expenditures, and the size of campus,” she says. “I ended my presentation with a picture of Camp Randall on game day, and that definitely received the biggest reaction —whispers and even wider eyes.” 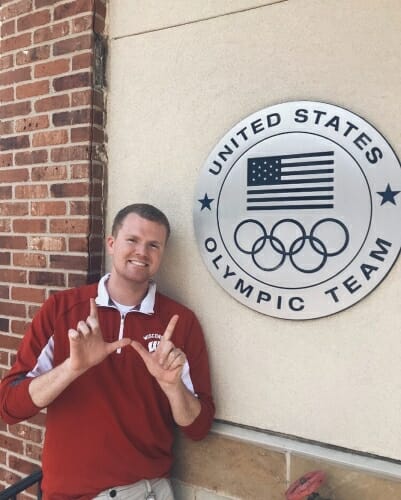 Senior Ben Sprengeler has always loved watching the Olympics on television and seeing the magnitude of its reach and its ability to bring the world together.

After the 2018 Winter Games in PyeongChang, he researched working for Team USA. A couple of interviews later, he landed an internship in its digital media department, specifically doing social media.

“Day to day for me includes managing the @TeamUSA accounts by creating content, getting sponsored posts and series out, monitoring social discussion, researching industry trends, engaging with athletes and fans and covering events,” says Sprengeler, whose internship extends through November.

One such event was the USA Swimming Nationals in Irvine, California, where he did live coverage from the pool deck. Kobe Bryant and Zac Efron were in the stands, and he got to see a world record being broken.

He’s learning what it takes to cover large-scale live sporting events, he says, as well as how important it is for the content to be aligned with the event sponsors. 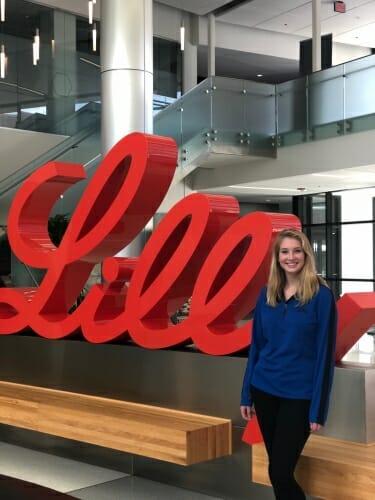 No textbook could have given Leah Deshler the full picture of what it’s like to work in a highly-regulated environment, she says. Her internship as an applied microbiologist in the pharmaceutical industry filled in the gaps.

“You hear about how strict regulations are in the healthcare industry, but you really don’t understand how much they impact everyday work until you are immersed in that environment,” she says.

During her internship, Deshler executed a study using a water-monitoring device that uses rapid microbiology methods to detect biologic particles in pharmaceutical water. She first had to get up to speed herself on the device by reading manuals, reviewing standard-operating procedures and meeting with personnel related to the project topic. She concluded her internship by presenting her findings to relevant stakeholders.

“The internship was everything I’d hoped it would be because it allowed me to take the foundational knowledge I’ve learned at UW-Madison and apply it to a real-life scenario.”

Major: Journalism, with a certificate in art 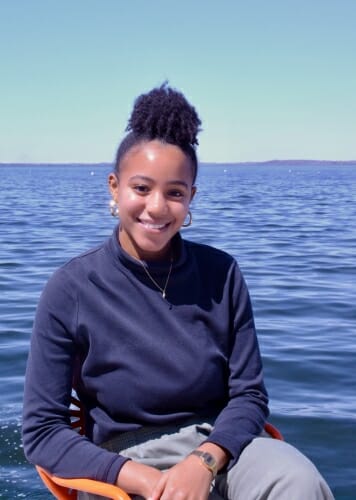 Coley’s internship was a unique joint one. She spent the spring semester interning at the Madison Children’s Museum, where she was tasked with creating a program that would facilitate a cultural exchange between children in Madison and the children at Play Africa, a South African nonprofit company and social enterprise that works to spark creativity.

“The kids there got to see what life was like for kids in Madison,” she says. “The work the children in Johannesburg did about their daily lives will be displayed in the Madison Children’s Museum this upcoming winter.”

In another project, she worked with the Metropolitan Museum of Art to have the children at Play Africa recreate images from the museum’s collection. But in looking at The Met’s website, Coley says she realized there were very few images of children of color. She decided to put her own spin on the project.

“I selected images of children playing, portraits of children, and kids with their families. The children at Play Africa then got to select which image they wanted to recreate, but I asked them to insert themselves, their families, or their friends to give them some control over the narrative of the piece.” 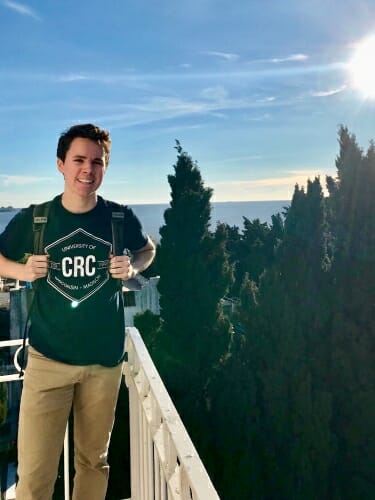 Sophomore Alex Plum sought an internship that would enable him to take what he was learning in the classroom and apply it to improving people’s lives. He also wanted to hone his Spanish and work in an interdisciplinary research environment.

He found all that and more in Maldonado, Uruguay, where he interned with Centro Universitario de la Región Este.

Through his work in a lab, he helped ensure the sustainability of a reservoir near the city of Minas that many residents depend on for high-quality water. The reservoir recently had come under threat due to increasing afforestation and agriculture within its watershed.

“Our job was to study all aspects of the reservoir and come up with recommendations for regulators and for those who manage the dam on the reservoir,” Plum says.

He collected samples and measurements from the reservoir during day-long sessions of field work. He helped develop a hydrodynamic model of the reservoir, and he designed a land-change forecasting model to determine how the water quality in the reservoir would be affected by various hypothetical changes to its watershed.

Bonus perk: Getting to cheer on Uruguay’s victories in the 2018 FIFA World Cup with locals. 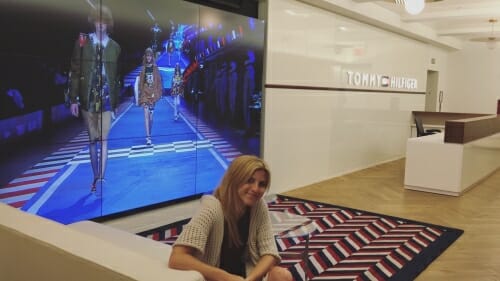 On her first day at the offices of fashion designer Tommy Hilfiger, junior Alexa Herskowitz got to speak directly to Hilfiger himself — an early sign that her presence was going to be taken seriously.

“Interns are given real responsibilities and treated like true associates,” she says.

As a member of the eCommerce and media team, Herskowitz worked on a variety of creative projects. Specifically, she was tasked with creating the third quarter’s promotional calendar for the Tommy USA site. She used her knowledge of search engine optimization and search engine marketing to develop ad copy for the site.

“I was constantly thinking of new ways to improve and implement marketing strategies across different media channels,” she says.

The experience was so positive that she’s eager to jump into the working world after earning her degree.

“Every single day at the Tommy office was thrilling and rewarding and brought something new to the table,” she says. “Who says you can’t wake up and be excited to go to work every day?”

Bonus perk: Getting to watch singer-songwriter Billie Eilish perform live in front of the entire office.