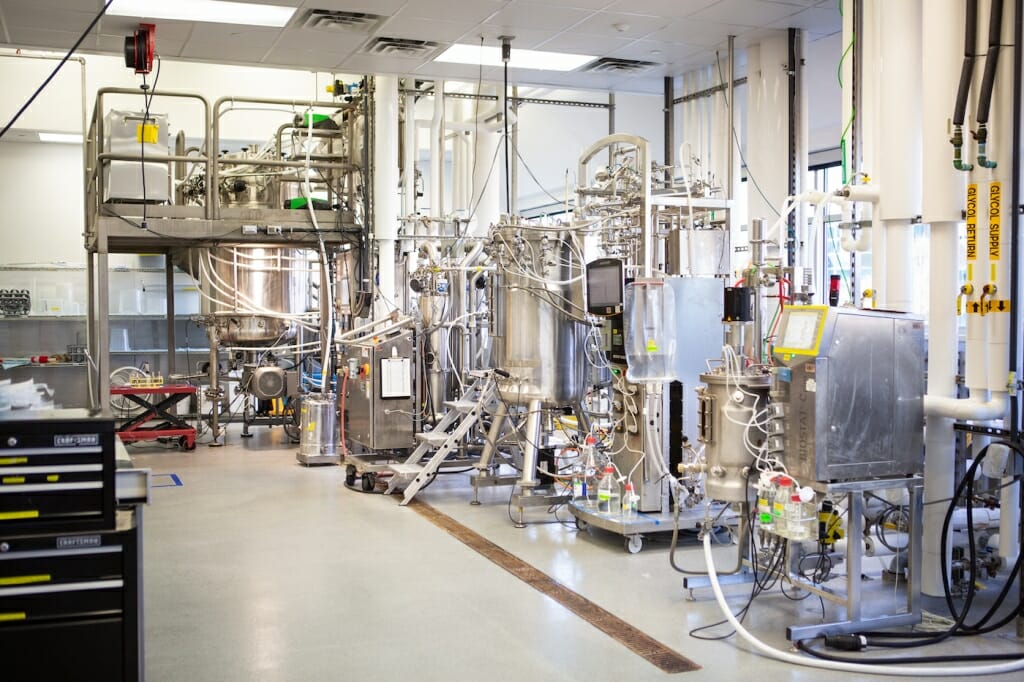 Part of Aldevron’s expansion is a fermentation suite that will allow the company to expand its projects’ scope and scale. Submitted photo

From February through June, we will highlight the ways that UW–Madison powers the state’s economy through research and innovation, educates the next generation and reaches out to Wisconsinites to improve their lives. February’s theme is Economic Prosperity. Watch for more at #CantStopABadger and #UWimpact on social media. Your support can help us continue this work.

February 10, Aldevron hosted a virtual celebration of its lab facility expansion in Madison.

Aldevron produces the raw materials that allow clients to make groundbreaking therapies, and its protein business unit has operated within University Research Park since 2009. The facility’s growth from 8,000 to nearly 30,000 square feet includes a new 3,500-square-foot fermentation suite and will allow the company to expand its projects’ scope and scale.

“Madison is rightly known around the world as a biotech hotspot, and the fact that there was a team out there ready to hit the ground running made it sort of a no-brainer,” said Ballantyne, who serves as Aldevron’s Chief Science Officer.

Speakers at the celebration pointed out that Aldevron’s partnerships with UW–Madison in research and education benefit both the company and the university.

“I watched Aldevron partner with researchers at the University of Wisconsin–Madison, with other companies at the Park, and with partners all over the globe, and it’s these partnerships that are at the very center of Aldevron’s business model,” said Aaron Olver, the Managing Director of University Research Park, a UW–Madison-affiliated nonprofit that creates neighborhoods where innovation can flourish. “So with the newly expanded capacity at the Park, I know Aldevron’s going to be able to find new partnerships and new opportunities, to push the boundaries of science even further.”

Ballantyne envisions the Madison team continuing their collaborations with researchers and also expanding into RNP capabilities for gene editing and IVT enzymes. He praised the team’s reputation and ability to transition new products into a manufacturing environment, saying there’s an art to that tech transfer.

“A lot of rigor goes into building our systems, especially with the complexity of protein,” he said. “It’s very exciting what their ramp-up is going to look like out there.”

“The University of Wisconsin has created a dynamic hub of biotech companies, based on its amazing research companies and abundance of trained talent,” said Aldevron CEO Kevin Ballinger, citing Aldevron’s partnership with UW–Madison as a compelling reason the company has continued to invest in its Madison site.

“We made the investment ten years ago and doubled down on this site because we see the incredible return and endless possibilities in the following areas: scientific collaboration around gene editing, a supply chain for cell therapy manufacturing, partnership on workforce development, and talent recruitment to help staff our growing team.”

“The University of Wisconsin has created a dynamic hub of biotech companies, based on its amazing research companies and abundance of trained talent.”  Aldevron CEO Kevin Ballinger

Aldevron’s Madison team makes CRISPR proteins like Cas9 that are essential to the field of gene editing and its potential to treat thousands of previously untreatable medical conditions. Aldevron Madison also makes the IVT enzymes for research use that support mRNA technology. Later this year, Aldevron will be making GMP IVT enzymes for clinical applications, all of which will be supported by the company’s pending ISO1345:2016 registration. The company is currently pursuing ISO 1345:2016, a standard for FDA compliance.

“Aldevron’s RNP services turn CRISPR reagents into therapies, and by the middle of this year, we’ll be the only company to launch a RNP manufacturing service to provide GMP reagents to clients developing gene therapies,” says Ballinger.

Tom Foti, President of Aldevron’s protein business unit since its 2009 Madison launch, said he will likely increase his staff by about 40% with the facilities expansion.

“Diversity is super important in high-performing teams,” said Foti. “We are investing in talent to build a strong culture centered around problem-solving and continuous improvement.”

Dr. Richard Moss, Senior Associate Dean for Basic Research, Biotechnology and Graduate Studies at the University of Wisconsin–Madison School of Medicine and Public Health, emphasized the strength of Aldevron’s collaboration with UW–Madison.

“Our relationship with Aldevron over time has evolved into a partnership that is not only collaborative but very effective,” said Moss. “Ongoing conversations between UW and Aldevron are really focused on expanding learning opportunities for students at the UW in the health professions.”

Aldevron supports UW–Madison’s Master’s program in biotechnology, offering real-world educational opportunities for students in the program and for graduate students and postdocs across campus. UW–Madison’s Department of Industrial Engineering has collaborated with Aldevron’s quick response manufacturing team on biological manufacturing processes, and Aldevron has partnered with professor Kris Saha in the Department of Biomedical Engineering on gene editing approaches to genetic medicine.

“We hope we will be able to expand our partnership in the near future to our program in advanced cellular therapies, with the idea of moving these new therapies to cell therapy manufacturing,” said Moss. “We see these partnerships as a win for translating discoveries from the bench to the bedside. It’s a win for learners; it’s a win for researchers; and most importantly, it’s a win for advancing the health of the patients in the communities that all of us serve.”