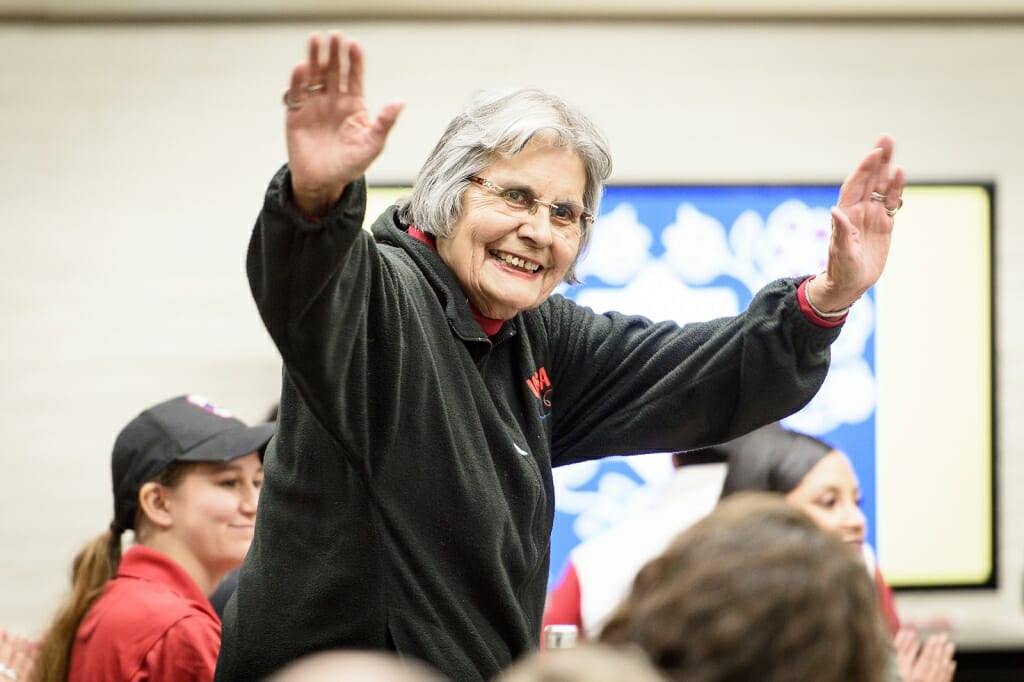 Ada Deer, a champion of Native American rights and the first participant in the new UW–Madison Elder-In-Residence Program, greets the attendees in November 2018. Photo: Bryce Richter

Last year, history was made with the election of the first Native American women to Congress. Decades before, Ada Deer was busy paving the way for others to succeed.

“I was born a Menominee Indian. That is who I was born and how I have lived,” she writes in “Making a Difference: My Fight for Native Rights and Social Justice.”

Deer will discuss her life and new memoir Nov. 19 at Memorial Union’s Shannon Hall, 800 Langdon St. A reception begins at 6 p.m. with programming from 6:30 to 8 p.m. Joining Deer at the public talk will be book contributor Theda Perdue, professor emerita at the University of North Carolina–Chapel Hill.

The book recounts Deer’s life, from growing up in poverty on the Menominee Reservation in Wisconsin and earning degrees in social work, to running for Congress and serving as the assistant secretary of Indian affairs for the U.S. Department of the Interior. Today, Deer remains deeply committed to human rights and social justice.

Prior to the public talk, Deer will be honored for her lifetime of commitment to social justice at a private reception with the the inaugural 4W UNESCO Chair Prize on Gender, Wellbeing and a Culture of Peace. The leadership and financial award will support student internships and activities focused on social justice in our community.

Deer credits her mother for her confidence and conviction.

“My mother was a fierce crusader for Indian rights,” she said during her confirmation hearing before the Committee on Indian Affairs. “Many a tribal leader and lawyer would grow more than a little apprehensive upon her approach. Many would think, ‘Here comes Connie Deer and it looks like she has something on her mind.’ I am told that there are people who have said the same thing about her oldest daughter.”

Deer was the inaugural participant last year of the Culture Keepers/Elders-in-Residence Program, a new UW–Madison initiative to improve the experience of American Indian and Alaskan Native students by hosting Native elders on campus for extended visits and educational exchanges.

Earlier this month, she was inducted into the National Native American Hall of Fame.

“I speak up. I speak out,” Deer said in an interview last year recognizing the 150th anniversary of women getting undergraduate degrees at UW–Madison. “It’s not like I plotted and planned. I just had this general goal. I want to do and I want to be and I want to help. And I’ve been able to do it.

To attend this free event, register by Nov. 18.