Muir, an Emmy-winning journalist and co-anchor of ABC’s “20/20,” has been selected as this year’s keynote speaker for the May 12 spring commencement ceremony at the University of Wisconsin–Madison.

Muir is known as a tough and principled reporter whose exclusive interviews generate global headlines — a “Gen X Walter Cronkite,” as Vanity Fair magazine put it.

He landed the first post-inauguration interview with President Donald Trump, and he moderated a historic town hall interview with Pope Francis in Spanish at the Vatican in 2015. During an interview with Muir in 2015, former Secretary of State Hillary Clinton went further than ever before in expressing remorse and apologizing to the American people for her use of a private e-mail server at the State Department. Muir won an Emmy for his national conversation with President Barack Obama on race, policing and efforts to bridge the divide.

Muir succeeded Diane Sawyer in 2014 as anchor and managing editor of “ABC World News Tonight.” During the 2016-17 TV season, the program was the most-watched evening newscast. The last time ABC took the honor was 21 years earlier, with Peter Jennings as anchor. 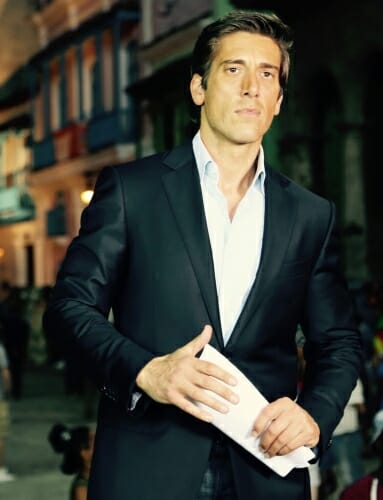 In a 2016 interview with the Los Angeles Times, Muir expressed immense gratitude at where his career has taken him.

“I’m the kid who wrote the letter to the local newsman when I was 13 years old and became an intern who was grateful I could ride in the back of the news cruiser,” said Muir, of Syracuse, New York. “I was grateful then and I’m still grateful when I walk every single night to that news desk.”

Commencement speakers are selected and recommended by senior class officers. The university covers the speaker’s travel expenses but does not pay a fee or other honorarium.

“We are so excited that David Muir will be delivering the keynote address to our graduating class,” says Ariela Rivkin, senior class president. “The Wisconsin Idea has taught us to make an impact beyond the walls of our classrooms. Through Mr. Muir’s platforms, he uses his influence as one of the most recognized and celebrated journalists around the world to share news, messages, lessons, and insights far beyond the boundaries of his newsroom, his state, and even his country. Because he and his work embody the Wisconsin Idea, he has a profound message to share with every Badger.”

In a recent address, Muir offered perhaps a hint at the message he’ll bring to UW–Madison graduates: “You don’t need a camera or a microphone to have a voice. I know you already have one. I’m simply here to urge you to use it.”

More information about commencement weekend — including parking, school and college ceremonies, and answers to frequently asked questions — is available online at commencement.wisc.edu, by phone at 608-263-2400 or by email at commence@chancellor.wisc.edu.