Photo gallery A peek at the new Hamel Music Center

It was black tie very optional, but a hard hat and closed-toe shoes required, during a recent tour of the Hamel Music Center, as representatives from the design team offered a sneak preview.

Construction began in February 2017 and is scheduled for completion in 2019. Located at the corner of Lake Street and University Avenue, the building is named in honor of Pamela and UW–Madison alumnus George Hamel. The Hamel family, which includes three generations of UW–Madison alumni, contributed $15 million to the project and has supported the university through gifts to athletics, scholarships, facilities and faculty support.

The School of Music has been named the Mead Witter School of Music and the concert hall in the music performance building will be named the Mead Witter Foundation Concert Hall. While far from completion, it was a chance to show off what will be a state-of-the-art facility that will not only provide a venue for performers and audiences but also will offer acoustical and recording technology for students. The facility will provide spaces for undergraduates to perform capstone projects and graduate students to perform final doctoral recitals. It will also serve as the host site for chamber recitals, lecture recitals and public events.

The new performance facility is designed by Holzman Moss Bottino Architecture of New York, in partnership with Strang Architects of Madison. Acoustic design is by Richard Talaske/Sound Thinking of Oak Park, Illinois, and theatrical design is by Fisher Dachs Associates of New York. 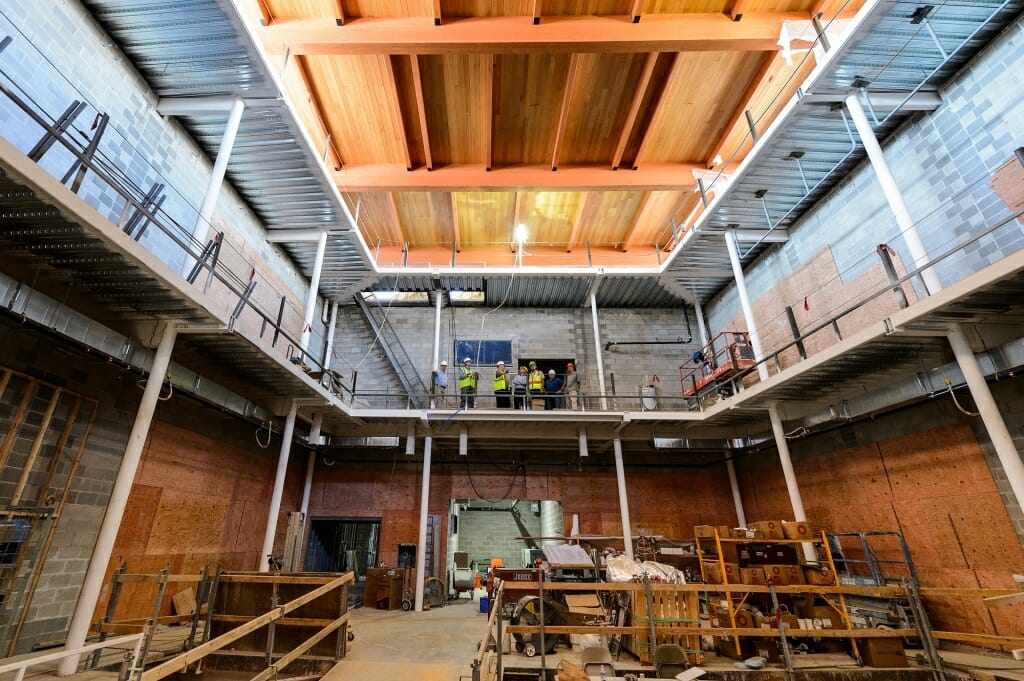 1 The Collins Recital Hall, named after UW alum Paul Collins who made a $5 million gift for the recital hall, will seat more than 300 people. It is being designed to create an intimate experience with a stage that allows for the audience to better see the musicians no matter where they are seated. Photo by: Jeff Miller 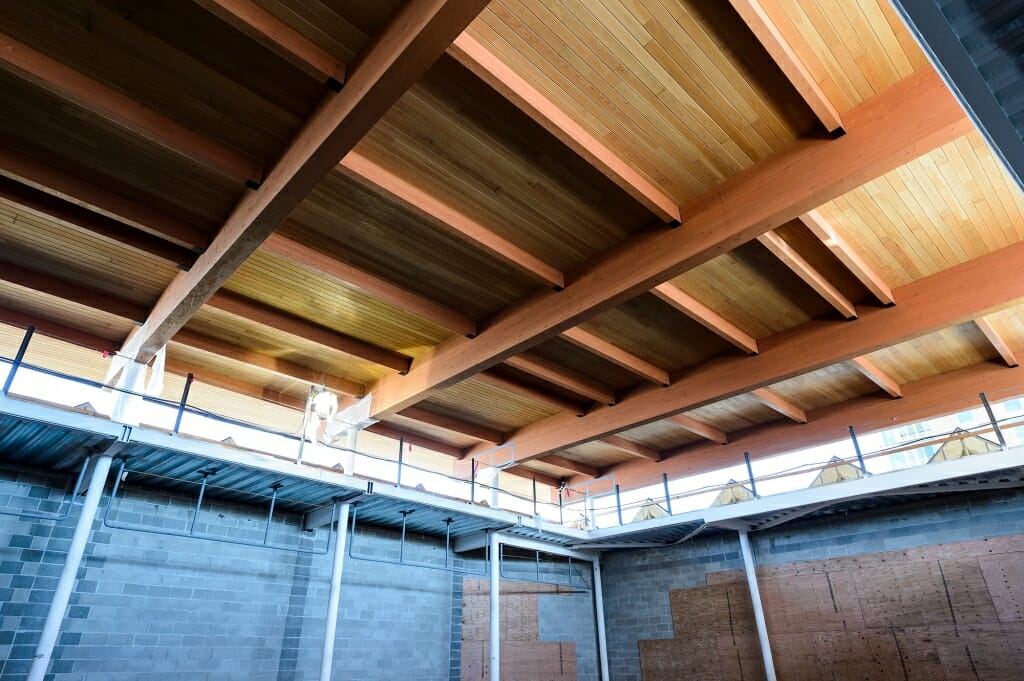 2 A ceiling of wooden beams and planks is shown in the Collins Recital Hall. Photo by: Jeff Miller 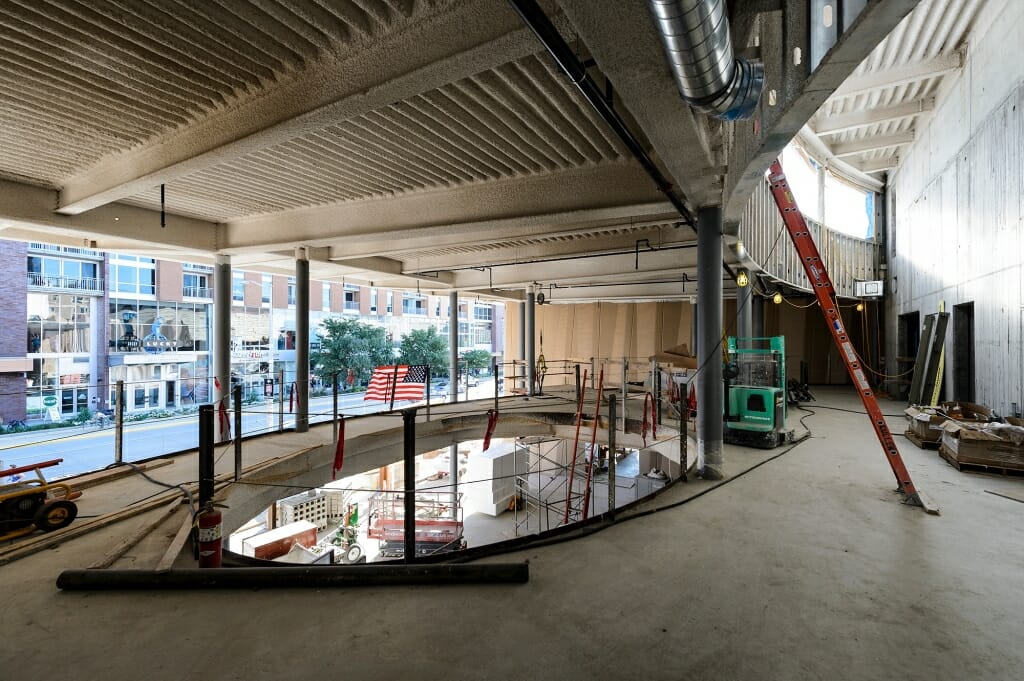 3 A glassed-in two-story lobby will include a central staircase. The space will not only serve as a welcoming area to guests but will also accommodate receptions and special events. Photo by: Jeff Miller 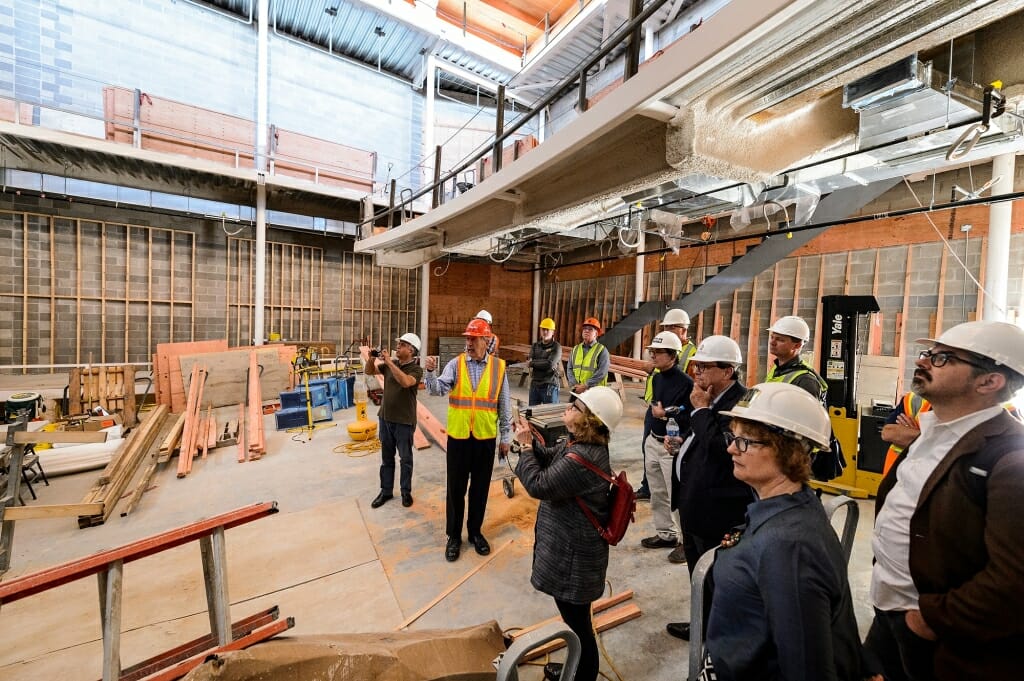 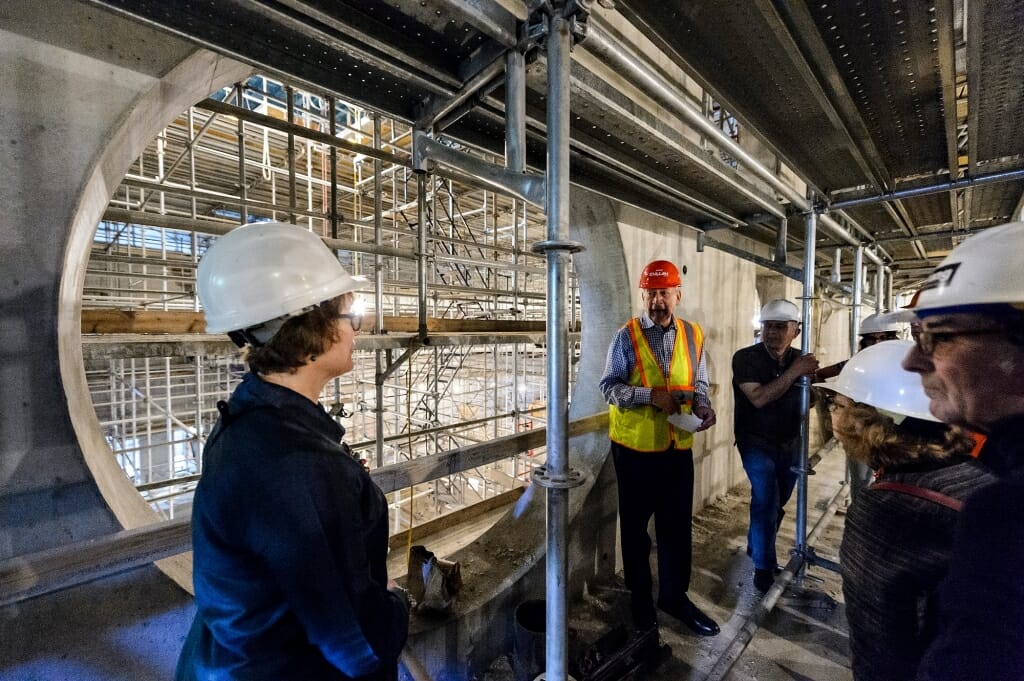 5 Holzman explains how the “circles” are part of an acoustical coffer system. The round openings allow sound to be reflected and absorbed. Photo by: Jeff Miller 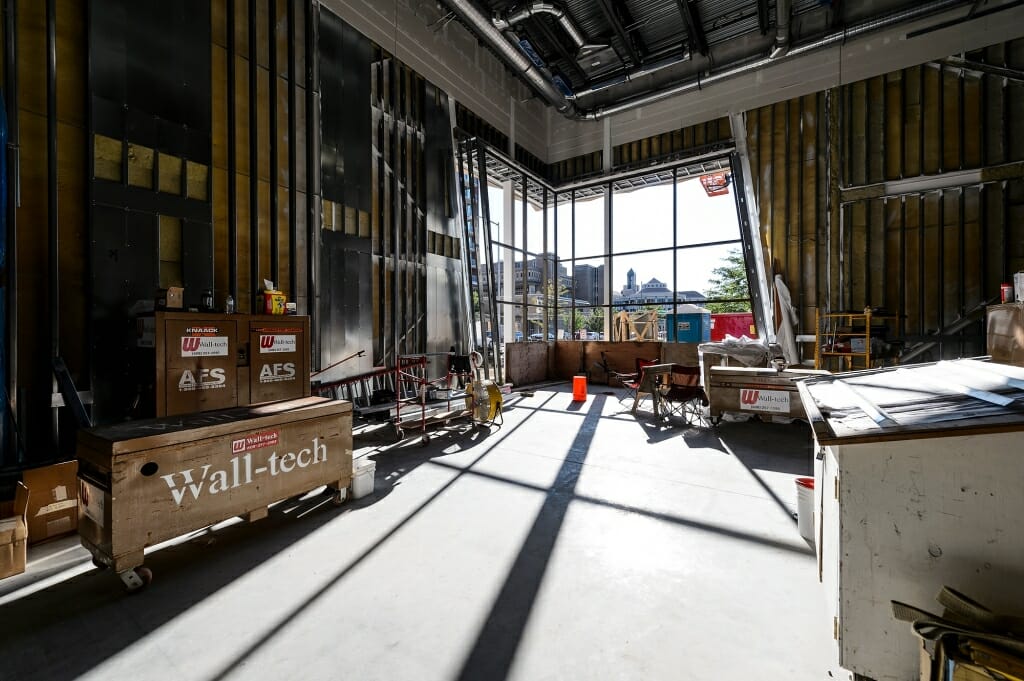 6 Features of the new building will include a glass-walled lobby, clerestory windows in the recital hall, and a glassed-in corner of the rehearsal hall to usher in light and allow passersby to see ongoing rehearsals. Photo by: Jeff Miller 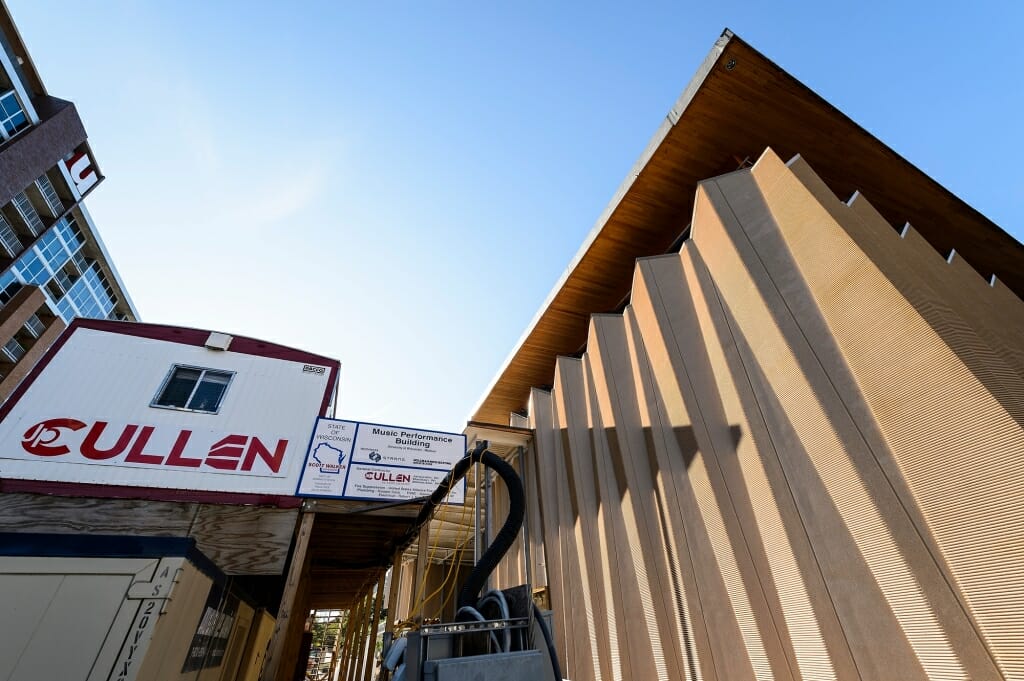 7 The play of sunlight and shadow highlight the various surfaces and textures of precast, exterior-wall panels for the Hamel Music Center. Photo by: Jeff Miller 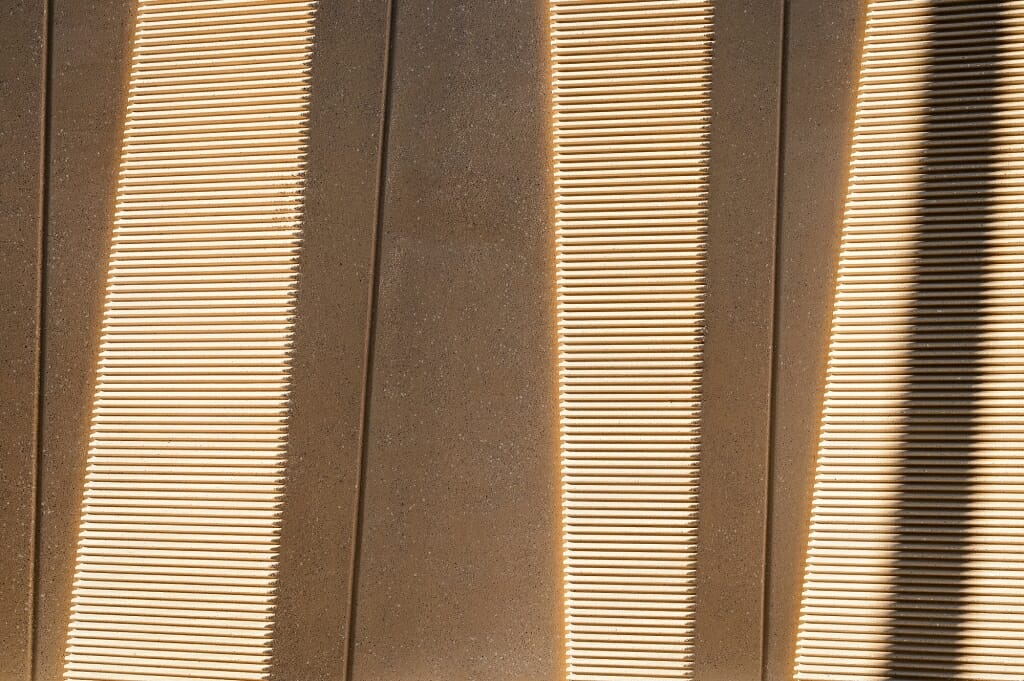 8 The exterior-wall panels are designed to look differently at different times of the day, depending on the shadows cast. Photo by: Jeff Miller 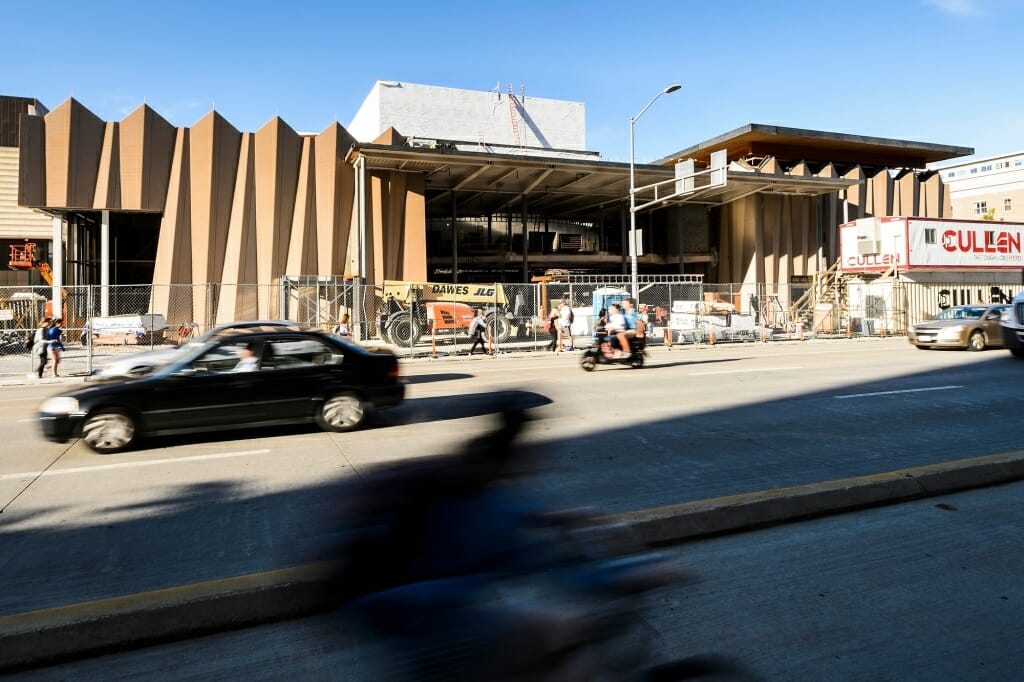 9 The noise of traffic from University Avenue will not be part of any performance at the Hamel Music Center. A wall within a wall will keep out the sounds from the outdoors. Sound has been the focus of the entire project. Each of the three main venues will be acoustically isolated from each other. Each will also be able to accommodate different performers and types of music with the acoustical treatments able to be tuned according to need. Photo by: Jeff Miller