A little less protection could bring about long-lasting solar cells

University of Wisconsin–Madison materials engineers have made a surprising discovery that could dramatically improve the lifetime of solar energy harvesting devices.

Their findings allowed them to achieve the longest-ever useful life of a key component of some types of photovoltaic cells called the photoelectrochemical electrode, which uses sunlight to split water into its constituent parts of hydrogen and oxygen.

In a study published recently in the journal Nano Letters, a team led by UW–Madison materials science and engineering doctoral student Yanhao Yu and his advisor, professor Xudong Wang, described a strategy that extended the lifetime of a photochemical electrode to a whopping 500 hours — more than five times the typical 80-hour lifespan. 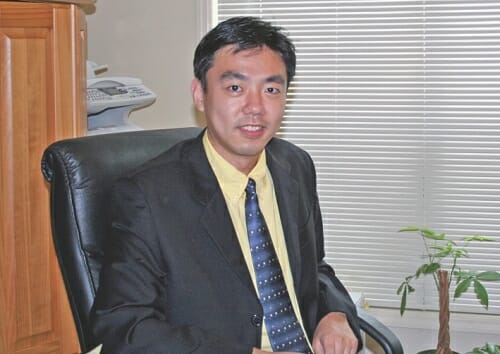 Usually, these types of electrodes are made of silicon, which splits water well but is highly unstable and quickly degrades when it comes into contact with corrosive conditions.

To protect these electrodes, engineers often coat their surfaces. It’s a tactic that only delays their breakdown, which eventual happens after a few days or even hours.

Intriguingly, the researchers didn’t make any changes to the coating material. Rather, they boosted the electrode’s lifetime by applying an even thinner coating of titanium dioxide than usual. Less really was more.

Key to this exceptional performance was what the researchers learned about the atomic structure of titanium dioxide thin films, which they create using a technique called atomic layer deposition.

Previously, researchers believed that the atoms in titanium dioxide thin films adopted one of two conformations: either scrambled and disordered in a state referred to as “amorphous,” or locked into a regularly repeating and predictable arrangement called the crystalline form.

Crucially, researchers were certain that all the atoms in a given thin film behaved the same way. Crystalline or amorphous. Black or white. No in-between.

What Wang and colleagues found, however, is a gray area. They saw that small pockets of an in-between state persisted in the final coatings. The atomic structure in these areas was neither amorphous nor crystalline. These intermediates have never been observed before.

“This is a cutting-edge of materials synthesis science,” says Wang. “We’re thinking that crystallization is not as straightforward as people believe.”

From there, the researchers determined those intermediates lowered the lifetime of titanium dioxide thin films by leading to spikes of electronic current that ate tiny holes in the protective coatings.

Eliminating the intermediates — and extending the coating’s lifetime — is as simple as using a thinner film. Thinner films make it more difficult for intermediate structures to form, so by reducing the thickness by three quarters (from 10 nanometers to 2.5), the researchers created coatings that lasted more than five times longer.

Now that they’ve discovered these peculiar structures, the researchers want to learn more about how they form and influence amorphous film properties. That’s knowledge that could reveal other strategies for eliminating them — not only could improve performance, says Wang, but also open new opportunities in other energy-related systems, such as catalysts, solar cells and batteries.

“These intermediates could be something very important that has been overlooked,” says Wang. “They could be a critical aspect that controls properties of the film.”