Three University of Wisconsin–Madison innovators have invented a better way for surgeons to locate tumors during lumpectomies for breast cancer.

The new system, developed by a startup called Elucent Medical, is in use at SSM Health Dean Medical Group in Madison and at UW Health. The company expects to be in a total of about 15 hospital systems by the end of January.

The new system exploits technological advances to yield benefits in patient stress, and the efficiency and efficacy of surgery. 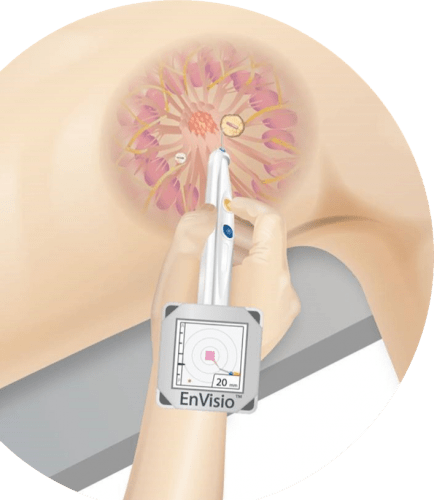 Currently, when doctors biopsy a suspicious breast lesion, they leave behind a small metal clip to mark the location. If the patient needs breast-conserving surgery (lumpectomy), this clip alone does not guide the doctor back to the biopsy site.

Instead, on the day of surgery, a radiologist will insert a hook wire through the skin down to the biopsy clip. This hook wire protrudes from the skin, and provides a visible road map to the lesion. The surgeon makes an incision in the skin, and follows along the wire to the target to remove the marker, wire and lesion.

By eliminating the hook wire on the day of surgery, the new marker promises to streamline scheduling and reduce patient stress, pain and costs.

Equally important, the system provides a precise and continuous 3D location of the SmartClip for the surgeon, similar to GPS navigation. The surgeon can choose the safest, least disfiguring path to the tumor before the surgery, and the system provides a continuous location of the SmartClip throughout the procedure. Up to three SmartClips can mark multiple targets or bracket a single target as needed.

Accurate localization of the SmartClip also aids the surgeon to remove an adequate margin of normal tissue surrounding a tumor. If the margins are inadequate, a second surgery may be needed.

The impetus for the invention came from Lee Wilke, a breast surgeon and director of the UW Health Breast Center. Like many in her field, she saw firsthand the need to supplant the hook wire with a superior localization system, one that would ease the entire surgical experience for the patient, operating team and hospital.

“The conventional clip and guide wire were introduced 75 years ago, and it was an adequate solution for its time,” says Wilke. “However, the breast needs to be compressed during wire placement, and upon release the tissue can move, so the wire may not show the ideal path to the tumor in terms of either efficiency or cosmetics. I was interested in developing a device that would allow surgeons to choose the ideal path from skin-to-tumor, and provide real-time information about where the tumor is located anytime during a surgery.”

“We had grown NeuWave together and decided we wanted to do another startup,” says Lee. “Laura [King] had a very clear message: We always start with the clinical problem, not with a technological solution looking for a problem. Lee Wilke was the ideal partner for this venture due to her clinical expertise, deep insight into the breast cancer world, and creative spirit.”

Wilke knew that various solutions to the localization problem had been proposed, such as radiation and magnetic tracking, but in her view, each one carried substantial drawbacks.

“Dr. Lee Wilke performs this procedure several times per week and understands the clinical need,” says King. “She chairs the scientific committee of the American Society for Breast Surgery, and is a leading breast surgeon in the United States. Having someone with her expertise deeply involved in the design process was critical to ensuring that we would meet the needs of patients and physicians.”

Van der Weide contributed expertise in radiofrequency technology, which became the core of the system for finding a surgical route to a breast tumor. “The problem that we were trying to solve is very complex, and van der Weide proposed an elegant solution that has proved to be both robust and accurate,” says King.

The idea survived rigorous culling. “We always have about 10 ideas on the whiteboard,” King says. “You need to look at multiple factors… you need a significant market size, you need to understand the reimbursement strategy and the regulatory pathway, and you need to make sure you can bring people to the table who are capable of solving that clinical need.”

I was interested in developing a device that would allow surgeons to choose the ideal path from skin-to-tumor, and provide real-time information about where the tumor is located anytime during a surgery.”

In Elucent’s system, the patient lies on a special mattress with radiofrequency send- and receive-antennas. Once the grain-of-rice sized SmartClip “hears” a signal from the antenna, it emits a response that is detected by receiving antennas.

In a manner akin to GPS position finding, a computer quickly computes the marker’s position, and the three-dimensional location is shown in real time to Elucent’s guidance device, which is mounted on the hand-held surgical device.

Arrows on the screen point the surgeon to the SmartClip within a few millimeters of accuracy. Because the screen is mounted on the electrocautery device, the surgeon’s eyes never leave the surgical field, decreasing operating time.

“Wireless, electromagnetic surgical navigation has never been demonstrated before at these large distances,” says King. “Typically, surgical navigation is performed optically, requiring a line of sight, however that does not work inside the body. We can implant the SmartClip at any time, often at the time of biopsy, and enable the surgeon to find it during the surgery.”

Elucent received Food and Drug Administration clearance for the SmartClip in June 2018, and for the EnVisio Surgical Navigation System and Navigator in March 2019.

Although the founders reside in Madison and Milwaukee, company headquarters is in Eden Prairie, Minnesota, to take advantage of medical-electronic and software expertise around the Twin Cities. Elucent has 30 employees in the two locations, and at sales offices elsewhere.

Breast surgery is only a start for Elucent, Wilke says. Other possibilities include lung cancer and procedures on the head and neck. “We anticipate it could be used any place that a physician makes a diagnosis with a scope or imaging device and leaves a SmartClip behind,” says Lee. “Even in the absence of anatomical landmarks, you can easily locate something with this device.”