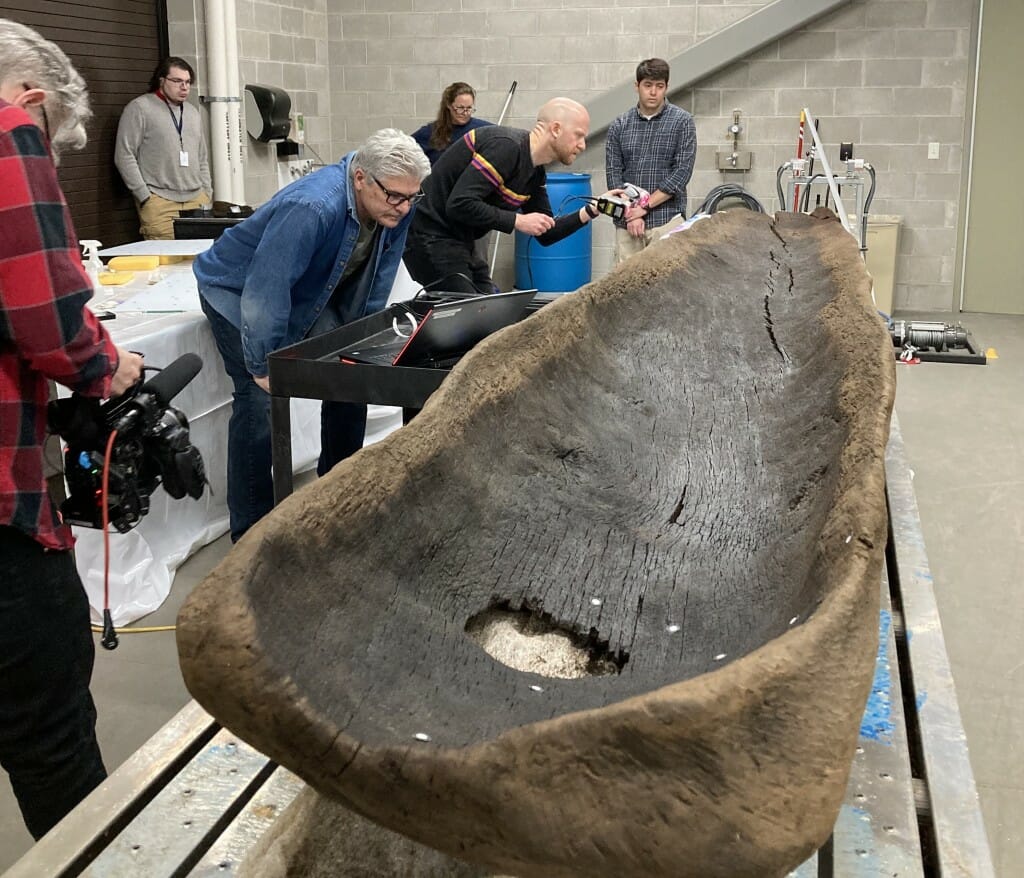 In March, Lennon Rodgers ventured into Wisconsin’s State Archive Preservation Facility for the first time. Rodgers — who directs the Grainger Engineering Design and Innovation Laboratory at the University of Wisconsin–Madison — was there to help archaeologists better understand a 1,200-year-old, 15-foot dugout canoe recovered in 2021 from the waters of Lake Mendota, the largest of Madison’s four lakes and part of the ancestral home of the Ho-Chunk Nation.

At the invitation of Wisconsin State Archaeologist James Skibo and Scott Roller, senior collections manager for the Wisconsin Historical Society, Rodgers scanned the canoe and created detailed 3D renderings that will preserve the boat’s legacy and allow researchers to study the craft while it undergoes a multiyear preservation process. 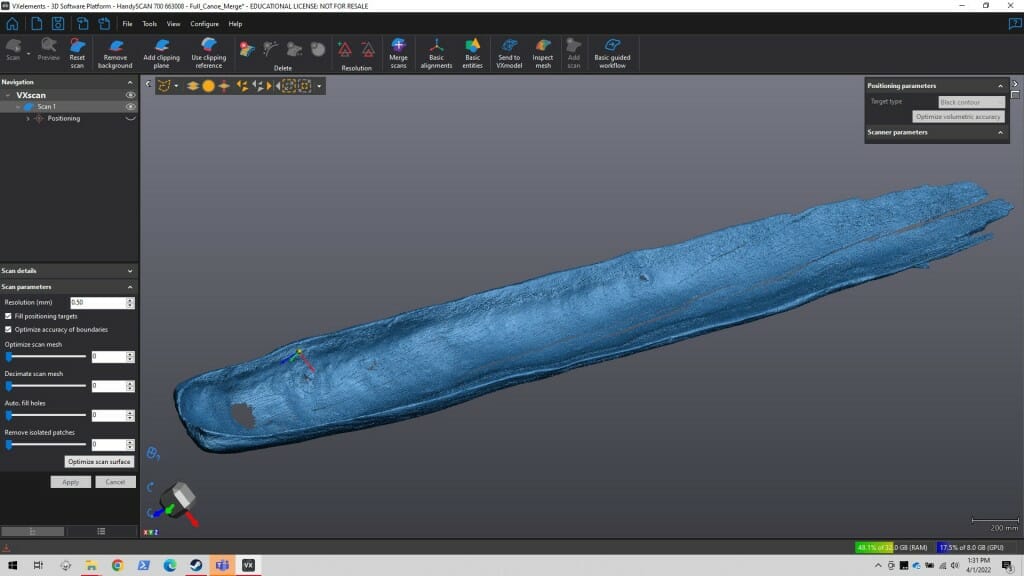 A full, detailed 3D scan of the 1,200 year-old canoe by UW–Madison specialists may help researchers describe its construction and use and guide production of replicas. Image courtesy Lennon Rodgers.

The canoe’s journey from the depths of Lake Mendota to the digital world began in June 2021, when Wisconsin Historical Society maritime archaeologist Tamara Thomsen discovered it in 27 feet of water about 100 yards offshore.

Worried that the canoe would deteriorate rapidly as it emerged from the sediment, Skibo, Thomsen, WHS maritime archaeologist Caitlin Zant and WHS staff archaeologist Amy Rosebrough put together a team of rescue divers and underwater archaeologists who braved icy waters to retrieve the priceless dugout canoe in November.

After releasing the boat from the clay on the bottom of the lake using a water jet, the divers attached air bags to gently lift the boat to the surface and guide it to shore. 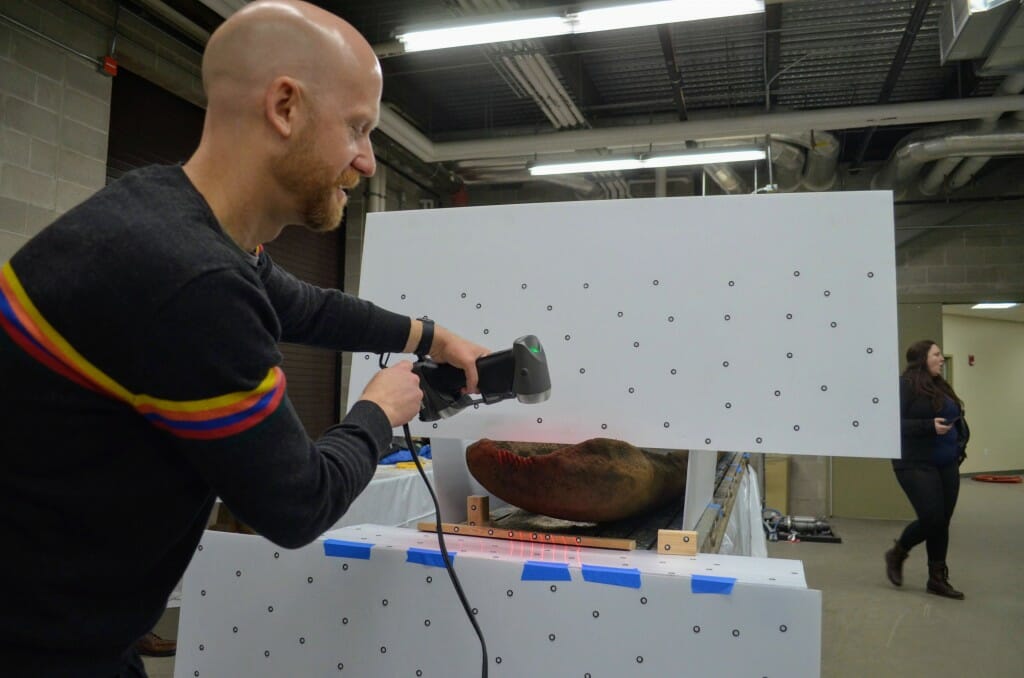 UW–Madison’s Lennon Rodgers wields a 3D scanner, collecting data on the shape and surface details of a 1,200-year-old dugout canoe to create a 3D rendering that can be studied while Wisconsin State Historical Society archivists perform a years-long preservation process on the boat. Photo courtesy of Wisconsin Historical Society

The fragile canoe is one of about three dozen ever found in Wisconsin and is the only one discovered with associated artifacts. The historical society team was able to discern a few important facts about the canoe from preliminary examinations. Carbon-14 dating revealed its age, suggesting that it was created and used by the effigy mound builders who inhabited the Madison area a millennium ago. Its position far offshore and a hole in the canoe suggest it sunk; in contrast, many other canoes have been discovered near shore, where they were purposefully buried underwater for winter storage. Seven net sinkers found in the boat also suggest that it was a work canoe, used for a type of fishing previously only documented among cultures living along the shores of the Great Lakes.

There is still much the boat can reveal about its origins and the people who created it, but direct study of the canoe is on pause as the craft undergoes a painstaking preservation effort that will take two or three years. That’s why the Wisconsin Historical Society pursued a high-resolution scan and 3D renderings.

Skibo found Rodgers, who oversees the College of Engineering’s makerspace at UW–Madison, through a Google search, and cold-called him.

Makerspace staff have scanned many unusual objects over the years, including snowmobile engines, butterfly chrysalises, Formula 1 vehicle components, valuable artwork and even the fragments of an ancient wooden bowl. Rodgers was especially intrigued by the canoe. 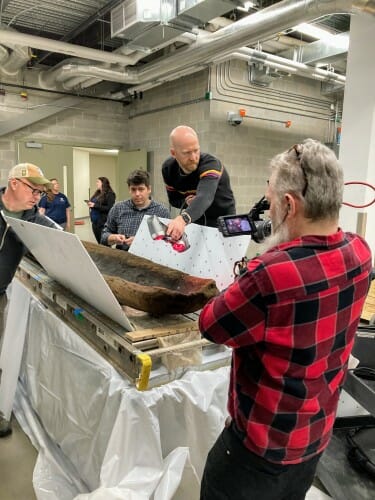 UW–Madison’s Lennon Rodgers, second from right, wields a 3D scanner, collecting data on the shape and surface details of a 1,200-year-old dugout canoe to create a 3D rendering that can be studied while Wisconsin State Historical Society archivists perform a years-long preservation process on the boat. Photo courtesy of Wisconsin Historical Society

“I really enjoy working in interdisciplinary settings,” he says. “I hung out with these archaeologists and historians and I could see they think differently from engineers. That’s why I’m attracted to these projects. They have a fresh, different approach to problem solving, and we as engineers can work with them in a complementary way.”

His scan of the canoe took place at the historical society’s preservation facility in late March. Crew members first carefully lifted the craft from its custom soaking tank and moved it to an examination table. Rodgers first scanned it with his iPhone to create a lower resolution color scan using its built-in lidar sensor and photogrammetry.

He then used the makerspace’s high-end Creaform Handyscan 700 3D scanner, which does not capture color, but has a much finer resolution of 0.05 millimeters. The scanner projected a laser pattern onto the surface and used two cameras to measure how the laser pattern deforms as it moves over the surface features. Small reflective circular stickers were placed on the surface to track the scanner’s overall location and orientation relative to the surface. This information was used to reconstruct the 3D shape of the surface in real time on a computer screen.

Such powerful portable scanners aren’t commonplace, but it was ideal for scanning an artifact like the canoe. Its high resolution can capture marks and textures not apparent to the naked eye and the software can be used to further analyze the surface by taking cross-sections and focusing on specific features. Rodgers made 20 separate scans, each taking 15 to 20 minutes.

Back on the UW–Madison campus, Rodgers used sophisticated software to stitch the scans together, creating a digital 3D model of the canoe that can be spun around, flipped upside down, zoomed in on and manipulated in many ways.

“Now we have a really good three-dimensional scan of this object. You can see all the way down to the tool marks,” he says.

In addition to using the scan to learn more about the canoe and its craftspeople, Skibo may ask Rodgers and his students to 3D-print a replica of the canoe to — among other things — investigate why it sunk. Down the road, that same scan could yield life-size replicas of the canoe that visitors could sit in when the new Wisconsin History Center opens.

Given the potential of such technology to unlock other stories, Skibo says he’s now considering future scans of other fragile archived artifacts, as well as using lidar-equipped drones to scan forests and fields in Wisconsin to uncover hidden effigy mounds and other historic sites.

Rodgers also would welcome additional collaborations with the historical society and opportunities to involve engineering students in learning and using the technology. Working with the canoe, and uncovering the individual tool marks in particular, has given him a special connection to the past.

“This canoe is a very complex shape, and it was created by hand,” he says. “So there was a person, an engineer, that built this 1,200 years ago. He or she was probably one of the original early ‘makers.’ To me, documenting that work is a great use for 3D scanning.”