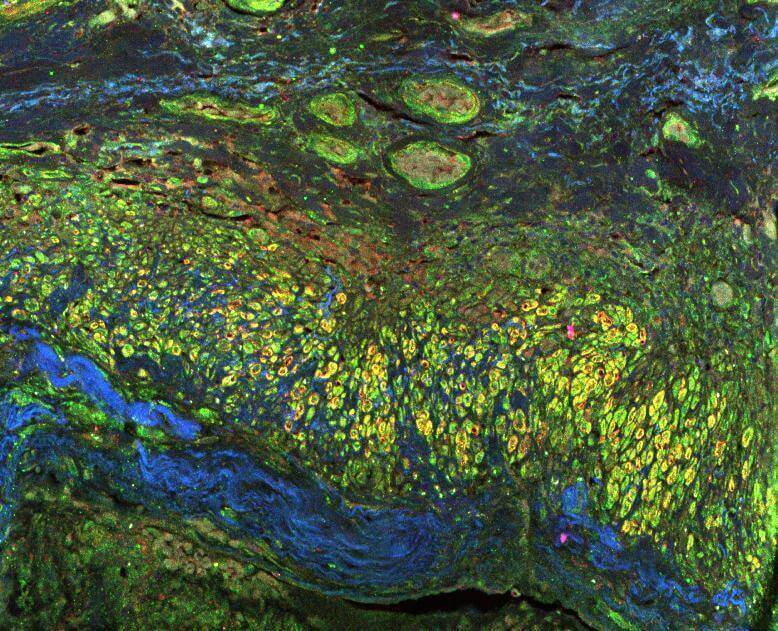 Immunohistology or Impressionism? A technique called “immunostaining” produced this image of human tissue and blood vessels from a patient by staining antibodies and proteins involved in immune response. The resemblance to famous works by Monet and Van Gogh is striking. Image by Wei-Hua Lee

Ten images and two videos by University of Wisconsin–Madison students, faculty and staff have been named winners of the 2016 Cool Science Image contest.

Sifting through 93 entries — 86 stills and seven videos — from across campus, the panel of seven judges selected winning submissions based on scientific content, and aesthetic and other creative qualities reflected in the pictures or the way they were obtained.

“As we do each year, we had an extraordinary set of submissions,” says Kevin Eliceiri, a contest judge and UW–Madison staff scientist who directs the Laboratory for Optical and Computational Instrumentation. “It is always a challenge for us to agree on winning pictures because there are so many good ones. These images represent not only the great research of UW–Madison but remind us of the great creativity and artistic eye so many of our scientists have.”

The 2016 winners represent disciplines from atmospheric science to zoology and include undergraduate and graduate students as well as UW–Madison faculty and staff. The types of images and videos range from composite satellite pictures of Madison’s lakes to the fluorescing brain vasculature of a live zebrafish larva. Demonstrating that satellites and high-end telescopes and microscopes have no lock on the creative aspects of imaging, one winning image was obtained using a homemade pinhole camera and photosensitive paper to track the daily course of the sun from solstice to solstice.

“These images represent not only the great research of UW–Madison but remind us of the great creativity and artistic eye so many of our scientists have.”

Now in its sixth year, the Cool Science Image contest is intended to recognize the technical and creative skills required to capture images or video that document science or nature. The contest is sponsored by Madison’s Promega Corp. with additional support from DoIT Digital Publishing and Printing Services.

Winning entries are shared widely on various UW–Madison websites and all entries are showcased in a slide show shown at the Wisconsin Science Festival and in concert with a fall exhibit of winners at the McPherson Eye Research Institute’s Mandelbaum and Albert Family Vision Gallery.

Nicholas Davenport, graduate student in cell and molecular biology, for his video illustrating long-range calcium signaling in the embryo of an African clawed frog.

Tedward Erker and Steve Kochaver, graduate students in the Department of Forest and Wildlife Ecology, for their remote-sensing satellite image of Madison’s lakes.

Karla Esbona, postdoctoral fellow, Department of Cell and Regenerative Biology, for her micrograph of breast tissue from a cancer patient.

Garrett Frankson, physics and astronomy undergraduate, for his pinhole camera image of the sun transiting the sky from solstice to solstice.

Ethan Heyrman, undergraduate in the departments of Geology and Atmospheric and Oceanic Sciences, for his picture of the “supermoon.”

Sarah Swanson, Botany Department staff, for her environmental scanning electron micrograph of the hypostome of a tick.

Michael Taylor, assistant professor, School of Pharmacy, for his micrograph of the brain vasculature of a zebrafish larva.