150 years ago, periodic table brought order to the chemical universe

Largely unnoticed in the corners of countless classrooms around the world hangs the singular achievement of a Siberian-born scientist and the founding document of modern chemistry.

And, this year, it has to cram a lot of candles on its birthday cake.

Yes, the periodic table of the elements turns 150 this year. The ubiquitous table’s sesquicentennial has ushered in global celebrations. It’s been lauded in Paris and fawned over in magazines.

Why all the fuss?

Because before Dmitri Mendeleev outlined the periodic law that underlies his famous table, there was no good way to make sense of the rapidly growing list of elements that constitute all normal matter in the universe. 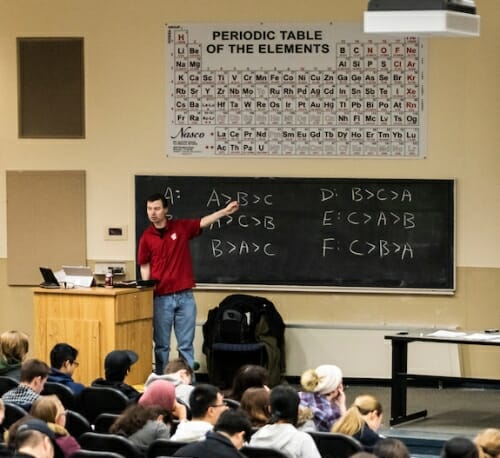 Matt Bowman teaches an organic chemistry class to undergraduate students in Ingraham Hall. “You could say that we take the periodic table for granted,” Bowman says. “But I could not imagine chemistry without it.” Photo: Lauren Justice

While writing his textbook, Principles of Chemistry, Mendeleev sought a logical way to organize the 64 elements known to science at the time. Like many before him, Mendeleev noticed that certain elements resembled one another in their chemical properties. By ordering the elements by increasing atomic weight, he spotted a periodic repetition in these common properties. He published his periodic law and table-like list of elements in 1869.

“The periodic table is a great intellectual accomplishment because it brings together so many important components of the behavior of the elements,” says Bassam Shakhashiri, a UW–Madison professor of chemistry and the William T. Evjue Distinguished Chair for the Wisconsin Idea. “This is a time to reflect on these discoveries.”

The periodic law allowed Mendeleev to predict the existence and properties of undiscovered elements that would ultimately fill the gaps in his table. The discovery of gallium and germanium just a few years later proved him correct and cemented his place in chemical history. 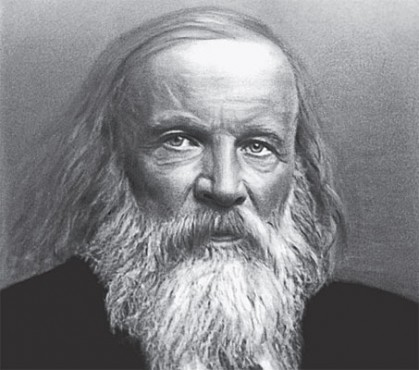 Dmitri Mendeleev sought a logical way to organize the 64 elements known to science at the time.

“Once these elements were discovered and their properties were shown to be practically identical to what Mendeleev had predicted, that’s what really set chemists to gradually making the periodic table into the icon that it is today,” says Bill Jensen, a professor emeritus of chemistry and historian of chemistry at the University of Cincinnati who earned his bachelor’s, master’s and doctoral degrees at UW–Madison.

But it still took a couple decades for Mendeleev’s table to gain global recognition. Eventually, it became the standard for organizing the elements. The table is now considered such a logical and fundamental ordering of the chemical universe that it’s been proposed as a way to communicate with aliens.

“The table is like socks,” says UW–Madison chemistry instructor Matt Bowman. “I use socks every day, but do not consciously think about them. So, you could say that we take the periodic table for granted. But I could not imagine chemistry without it.”

Eventually, the discovery of protons and electrons changed the table in a subtle but important way. Mendeleev originally ordered his table by atomic weight, but the periodic table is now ordered by atomic number, which refers to the number of protons in the nucleus of an atom. The protons define the number of electrons, located outside the nucleus, which in turn control the properties that so regularly repeat within each column in the table. 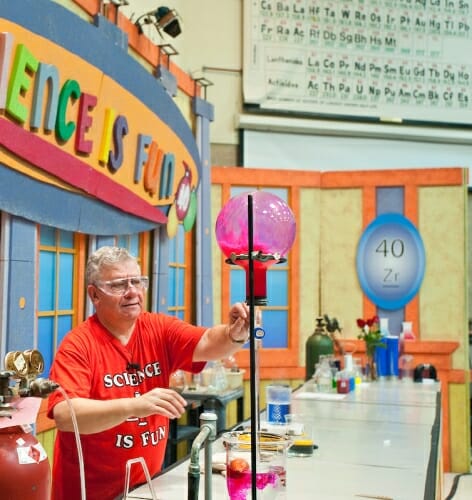 Bassam Shakhashiri performs his annual “Once Upon a Christmas Cheery in the Lab of Shakhashiri” demonstration in 2009. The periodic table is visible at upper right. Photo: Bryce Richter

The elements have found many adherents over the last 150 years. In 2003, Shakhashiri contributed to a celebration of the periodic table by writing about lead. In the essay, he recalled his days digging up lead coins from long-dead empires in his native country of Lebanon. And, Shakhashiri wrote, the ancient metal spawned the mascot of UW–Madison, because early European-American settlers of the Wisconsin Territory were said to resemble badgers as they slept in their hand-dug lead mines.

Lead was also special to the author and neuroscientist Oliver Sacks, who wrote about his deep connection to the elements as he faced terminal cancer in 2015. He collected as many elements as he could, one for each year of his life. Sacks lived to age 82, the atomic number of lead. Had he lived to 83, he would have reached what he called lovable, misunderstood bismuth — which sat in his office, next to lead.

This year also marks an anniversary for Shakhashiri. He will present his 50th annual Christmas lecture, Once Upon a Christmas Cheery in the Lab of Shakhashiri, on Sunday, Dec. 1, at the Middleton Performing Arts Center.

Satirist Tom Lehrer performs “The Elements” in Copenhagen, Denmark, in 1967. It is his musical rendition of the periodic table to the melody of Gilbert and Sullivan’s “I Am the Very Model of a Modern Major-General.”