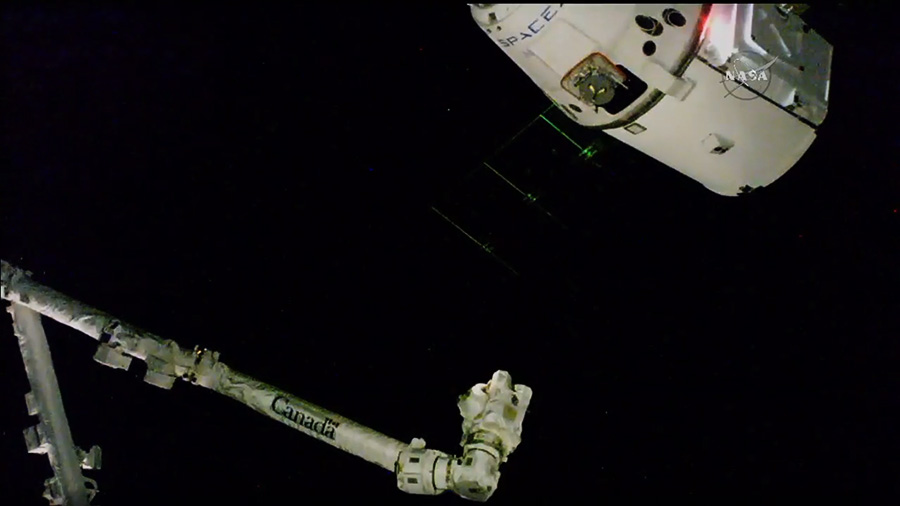 The Dragon resupply ship is pictured just 10 meters away from the space station’s Canadarm2 as it delivers supplies and research experiments on Dec. 17. Photo courtesy of NASA

The latest resupply mission to the International Space Station delivered hundreds of seeds to the spacefaring research lab Sunday, Dec. 17, to test how plants grow in the stressful environment of zero gravity.

This is the fourth plants-in-space experiment for University of Wisconsin–Madison Professor of Botany Simon Gilroy. His lab will grow identical seedlings on Earth during the month-long experiment to compare their growth with and without gravity. The researchers are studying how plants respond to low-oxygen environments created by changes in how water and air behave in zero gravity.

New equipment will allow Gilroy to grow his plants under lights on the space station for the first time, providing more realistic conditions compared to previous experiments in the dark. In another first for Gilroy’s team, astronauts will take images of living plants as they grow using microscopes on the space station. 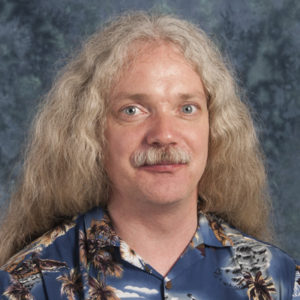 The seeds were delivered to the space station by a SpaceX Dragon capsule launched by a reused Falcon rocket. After the NASA-funded experiment ends, astronauts will apply a fixative mixture to stop growth before freezing the plants for transfer back to Earth.

Gilroy says the loss of gravity has surprising effects on normally mundane things, like how water flows — or doesn’t.

Gilroy’s team turns to Arabidopsis — a small mustard plant common in plant research — to answer their questions about zero-gravity plant growth. In their current experiment, the researchers are growing mutant Arabidopsis that responds strongly to low-oxygen stress, at least on Earth. They are also growing Arabidopsis plants that they engineered to produce fluorescent proteins in response to oxygen deprivation. The fluorescent plants will be imaged in orbit by astronauts in the middle of the experiment. 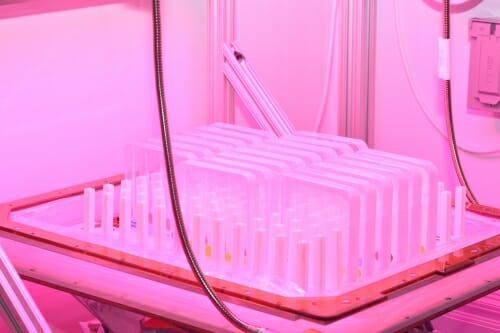 Plates hold seeds of the mustard plant Arabidopsis, which will be grown on the International Space Station to test their response to zero gravity. Photo courtesy of NASA

“That will give us a map of where within the plant there is local low-oxygen stress,” says Gilroy.

In a departure from previous experiments, the Arabidopsis seedlings will be grown in the light. The upgrade comes as Gilroy’s team gains access to the “veggie” system, which was used in 2015 to grow lettuce for astronauts to eat. Veggie was developed by Madison-based ORBITEC.

Once the samples are safely back on Earth, Gilroy’s lab will compare the pattern of gene expression of space-grown plants to their counterparts grown on Earth. They will also do their own imaging of another fluorescent marker for stress. In all, the data will allow the researchers to ask if the plants are experiencing something akin to terrestrial oxygen deprivation, or stresses unique to growing in space.

The experiment and crew supplies launched on Dec. 15 after several delays, with a launch window of a single second. To prepare for the launch, Gilroy and his team traveled to the Kennedy Space Center in Florida to perform several dry runs setting up seeds in special chambers. Then, several days before the scheduled launch date, the researchers flew down with enough seed to handle six delayed launches. Each delay that lasts more than two days requires the experiment to be completely reset, otherwise the seeds may germinate before they arrive in space, spoiling the experiment.

As spacefaring plant growth experiments like Gilroy’s continue to pile up, what have biologists learned? 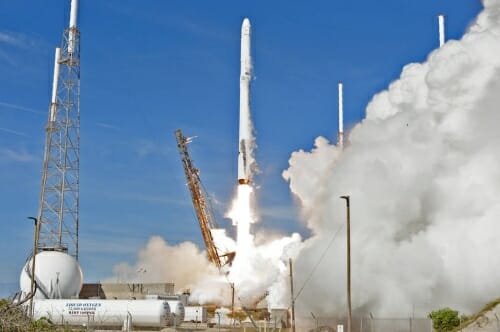 The two-stage Falcon 9 launch vehicle lifts off Space Launch Complex 40 at Cape Canaveral Air Force Station carrying the Dragon resupply spacecraft to the International Space Station. Liftoff was at 10:36 a.m. EST. On its 13th commercial resupply services mission to the International Space Station, Dragon will bring up supplies, equipment and new science experiments for technology research. The SpaceX Dragon spacecraft will deliver about 4,800 pounds of cargo and material to support science investigations aboard the space station. Photo courtesy of NASA

“I think the biggest thing that we’ve got is that plants grow okay in space,” says Gilroy, noting that at the beginning of the space age, even that wasn’t guaranteed. UW–Madison has a long history of such experiments, dating back to 1967. “Plants grow well enough to, for instance, go through an entire life cycle. The issue is how well the plants grow. We are still at the level of working out whether the issues in space are intrinsic to the biology, or whether we’re just not really good space gardeners yet.”

“Human agriculture has been going for tens of thousands of years on land,” says Gilroy. “And we are right at the dawn of space agriculture. We just haven’t done enough of it to know which are the correct ways to do things.”