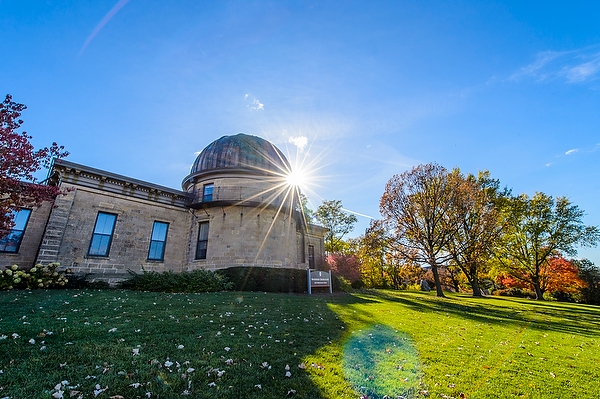 Sunlight shines from behind Washburn Observatory during autumn 2014. The observatory will be open May 9 for safe viewing of the Mercury transit. Photo: Bryce Richter

On Monday, May 9, the planet Mercury will make a rare transit of the sun and — weather permitting — the University of Wisconsin–Madison Department of Astronomy will open Washburn Observatory to the public for safe viewing of the event.

“Many of us remember the transits of Venus in 2004 and 2012,” says Jim Lattis, director of UW Space Place. “In those rare events — there won’t be another until December 2117 — we saw our neighbor planet in the form of a small, black disk cross, or transit, the bright disk of the sun.” 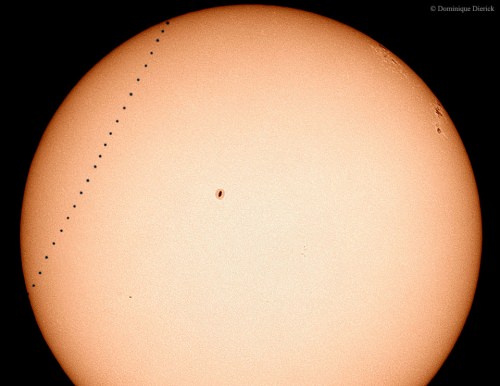 The above time-lapse sequence, superimposed on a single frame, was taken from a balcony in Belgium and shows the entire transit of May 7, 2003. The solar crossing lasted over five hours, so that the above 23 images were taken roughly 15 minutes apart. Photo: Dominique Dierick

A planetary transit is analogous to a solar eclipse, in which the moon crosses the face of the sun. However, unlike the moon, planets can never completely block the disk of the sun.

Mercury will make a transit similar to those of Venus, but because Mercury is smaller and farther away, its disk will appear smaller on the face of the sun. Mercury transits are also more common than those of Venus, says Lattis. “They happen 13 or 14 times per century compared to over a century between pairs of Venus transits.” 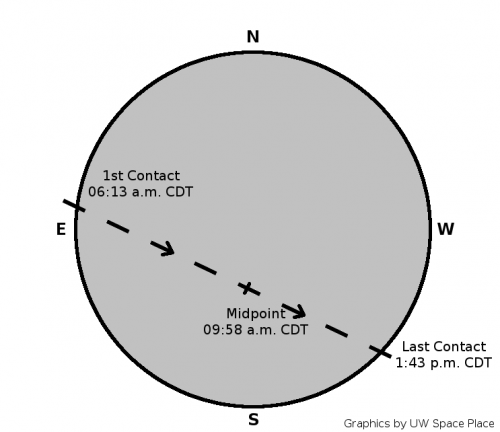 The path Mercury’s disk will take across the face of the sun, with times as viewed from Madison.

“They were within 5 minutes of arc,” Lattis says. An arc minute is a small angle occupied by a bit of sky and is about the diameter of a quarter viewed from the length of a football field. “The predictions of previous theories — those of Ptolemy and Copernicus — were as much as 5 degrees in error, a factor of 60 times worse!”

A telescope is necessary to see Mercury’s small disk against the large backdrop of the sun. It would take about 150 Mercury disks to span a solar diameter, Lattis says — which is yet another contrast to Venus, which can be seen without magnification. However, safety precautions are necessary since staring into the sun can damage vision and observing equipment.

“Do not look directly at the sun without appropriate filters, and do not point optical equipment at the sun unless you know exactly what you are doing.”

Lattis, who is also an instructor in the astronomy department, provides the following advice: “Aiming a telescope or binoculars at the sun is a dangerous operation, requiring special equipment and techniques, and therefore best left to skilled observers. A full-aperture solar filter properly fitted to the front of the telescope is a good way to observe this event, but make sure no finder telescopes or other devices are exposed to the direct sunlight.

“It is possible to project the image of the sun formed by a telescope or binoculars onto a screen, and the image projected on the screen is safe to observe. However, there is still a serious hazard in the intense beam of sunlight, which can cause instantaneous eye damage and even start fires. Moreover, many telescopes and binoculars will be damaged by the intense heat, while finder telescopes and sights present further dangers.

“Do not look directly at the sun without appropriate filters, and do not point optical equipment at the sun unless you know exactly what you are doing.”

Safe viewing at Washburn Observatory, 1401 Observatory Dr., which just reopened after a two-year closure for repair, will take place from 6 a.m. until 2 p.m. on Monday. In case of extensive cloud cover, the event will be canceled. Also note that public parking near the observatory is limited on weekdays. Consult a campus parking map to find public lots and parking spaces, or consider public transportation.