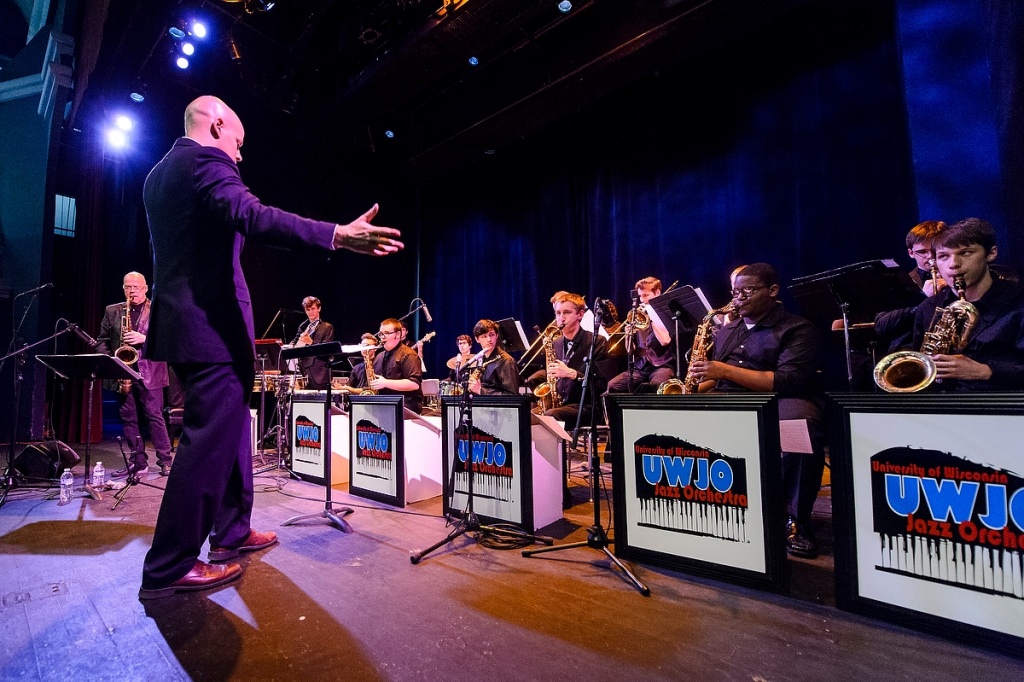 Johannes Wallmann is not the kind of guy who likes to rise at 6 a.m. As a UW–Madison jazz professor and pianist, he puts in late hours at rehearsals and concerts with college students and performing at local jazz clubs.

But when it comes to encouraging young musicians, he doesn’t hesitate to set his alarm. Some area high schools offer jazz not as a credited class, but as a sunrise elective. So every so often, Wallmann drops by at 7 a.m. to offer his insights, foster their enthusiasm for the genre and help them improve.

“It’s not necessarily the hour at which jazz is supposed to be played,” Edgewood High School band teacher Carrie Backman says wryly. “But Johannes comes at that hour, and puts in the extra effort.”

Four years after he arrived at UW–Madison as the inaugural director of jazz studies, funded by the John and Carolyn Peterson Foundation, Wallmann’s efforts seem to be paying off.

Jazzed to be here 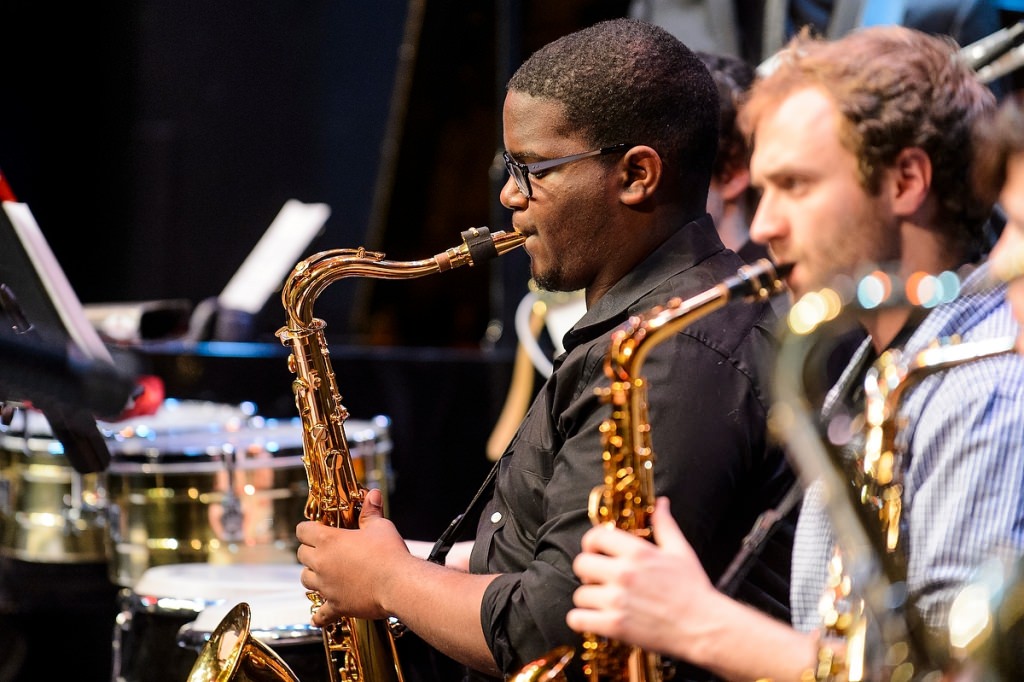 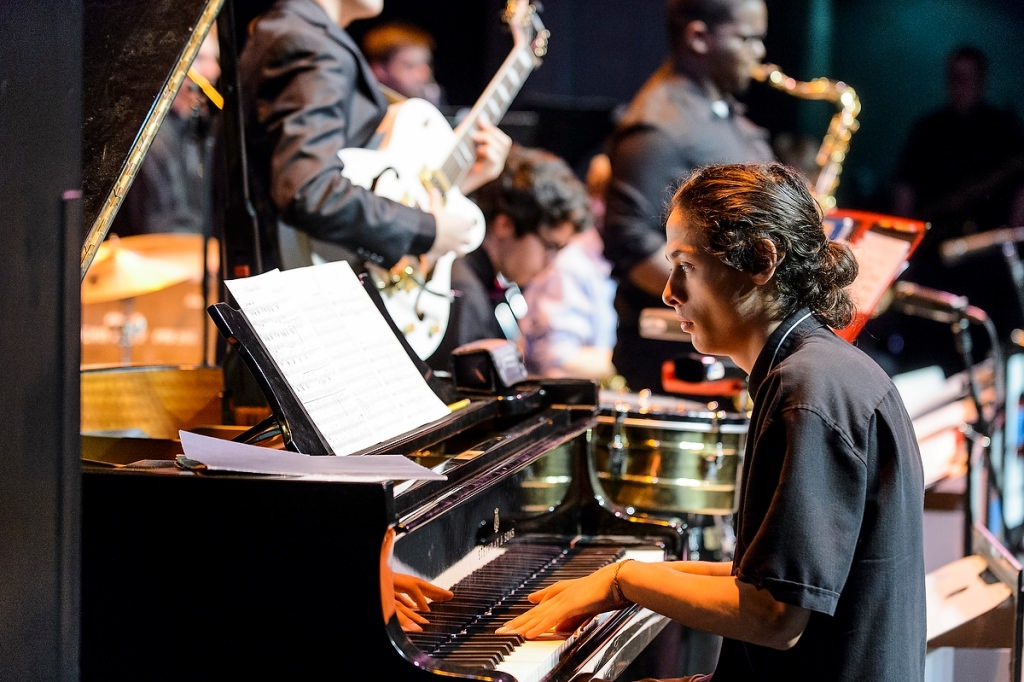 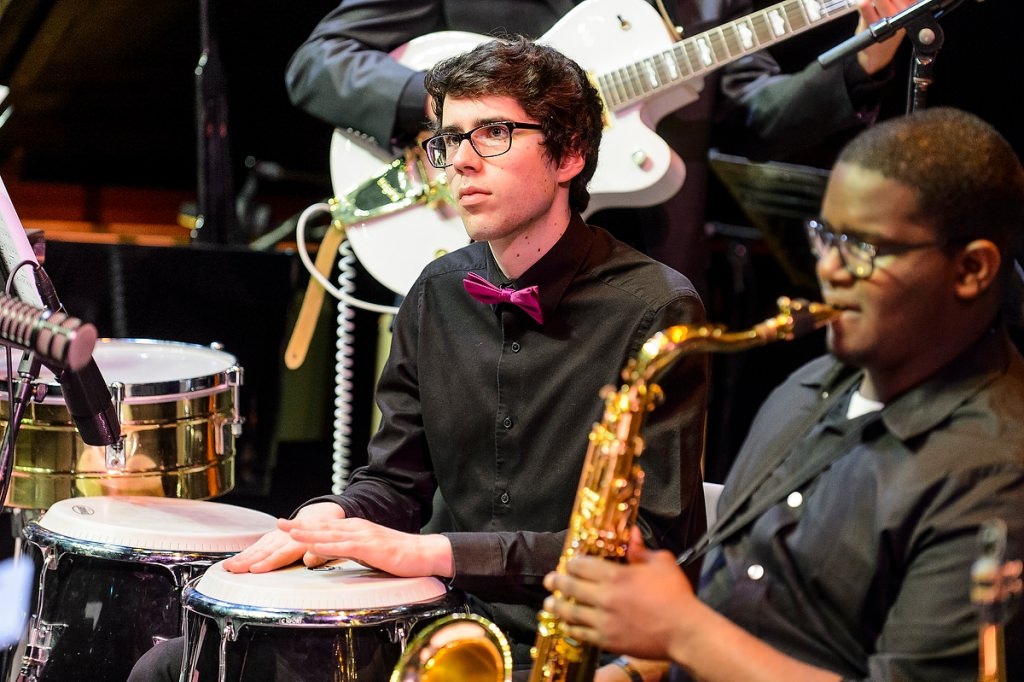 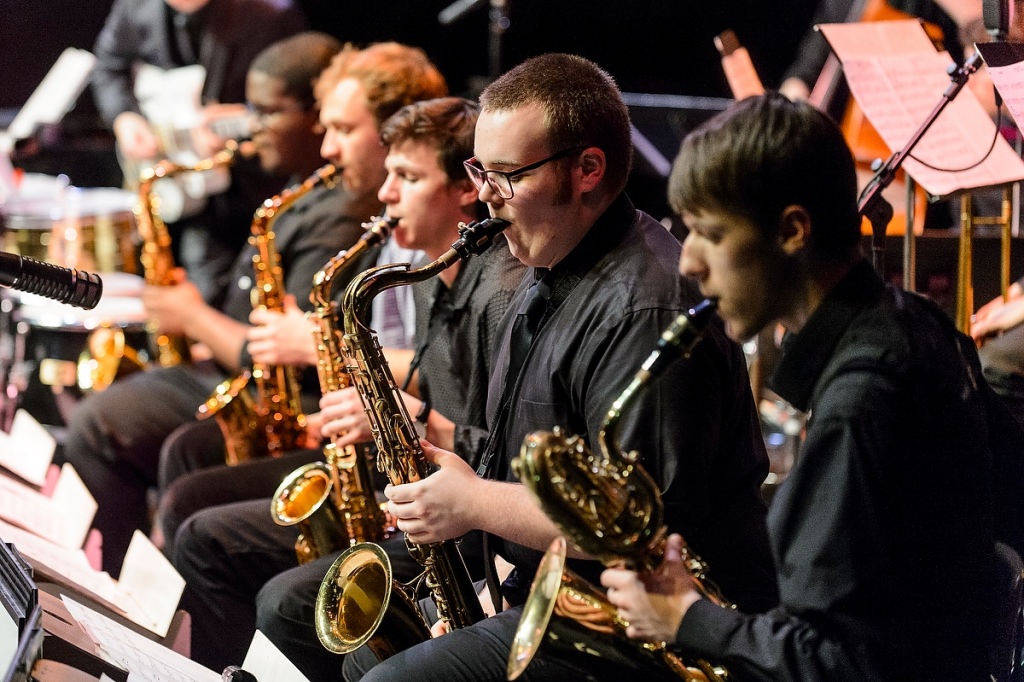 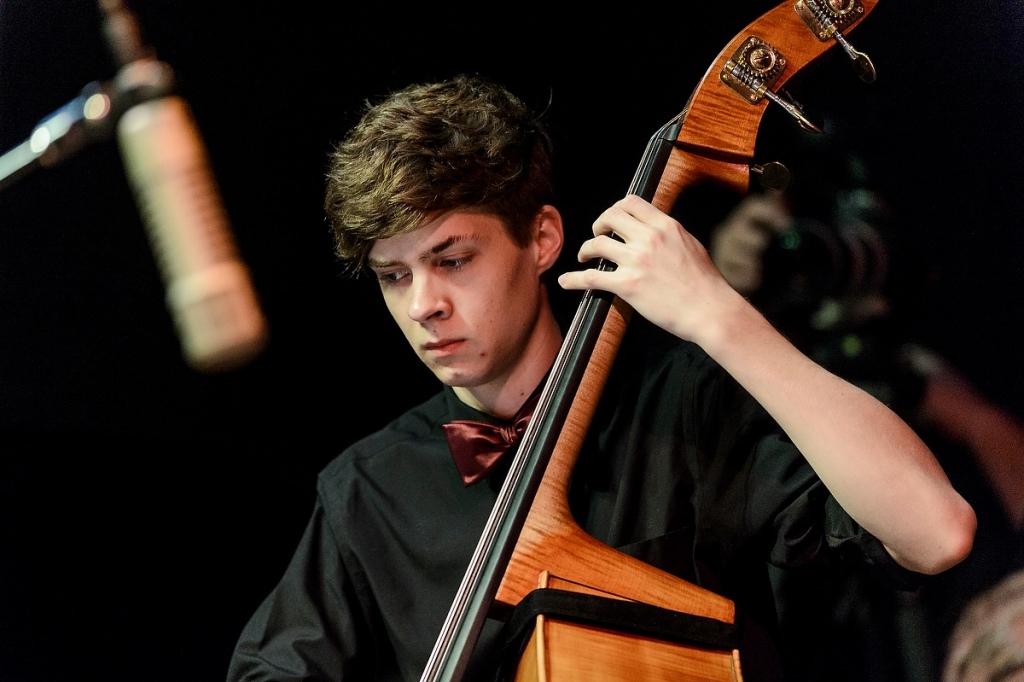 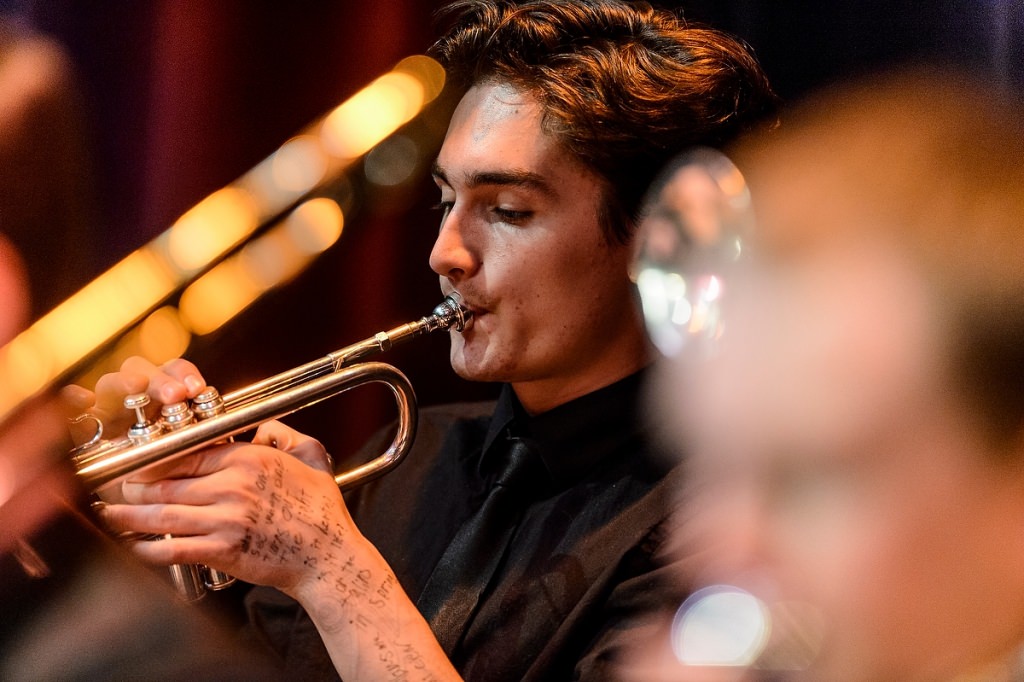 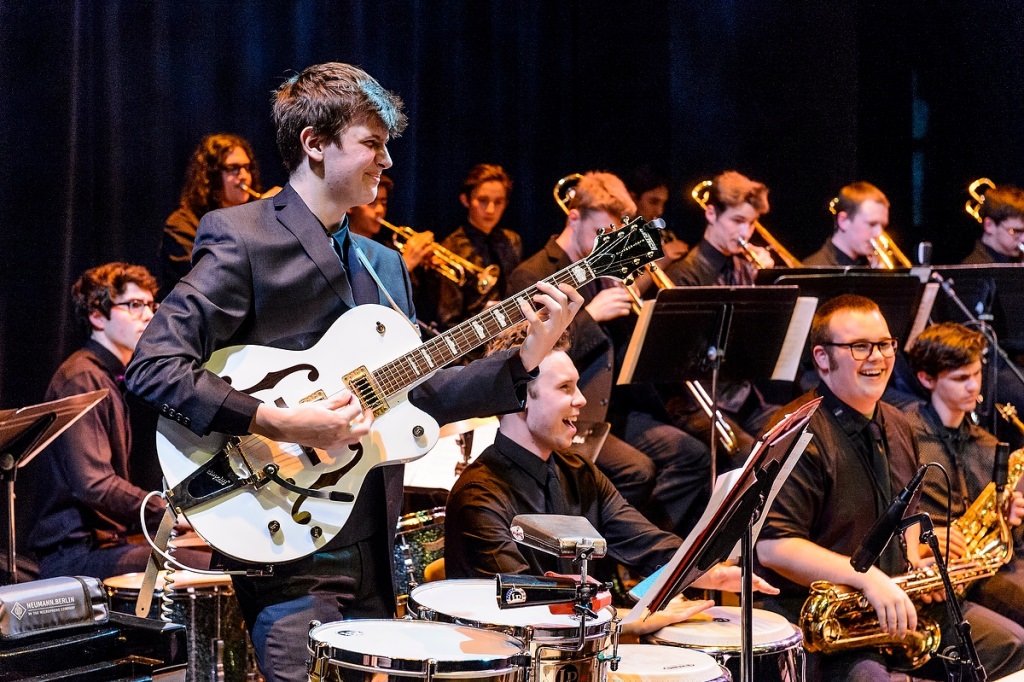 Early on, he created a handful of new jazz ensembles and started attracting interest as he played piano at Madison bars, such as the Fountain, the Cardinal and the Brink Lounge.

He hired instructors in jazz trumpet and jazz percussion, and will add a part-time jazz guitar specialist this fall. The school revived a long dormant undergraduate major in jazz studies that will celebrate its first two graduates this spring.

On the outreach side, Wallmann travels to high schools to offer clinics in jazz improvisation and, closer to home, coaches the university’s Summer Music Clinic jazz ensembles. At the Eau Claire Jazz Festival, his jazz ensembles started earning accolades, taking firsts in the college combo category (2014 and 2015) and big band category (2016).

And, in what was possibly the most significant move of all, Wallmann established the UW High School Honors Jazz Band as a way to draw young musicians into the university’s arc, in much the same manner as the Wisconsin Youth Symphony Orchestras and Winds of Wisconsin. The band provides top-flight teaching to young instrumentalists in southern Wisconsin, this year attracting 20 students from eight high schools in three counties. 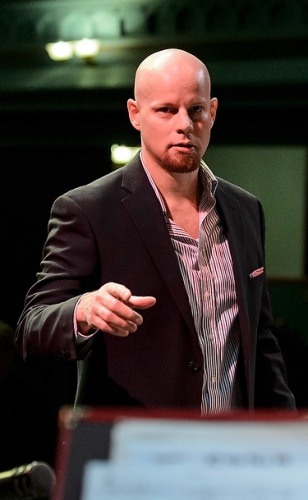 The effect has been felt by everyone in the Madison jazz world: teachers, musicians, jazz patrons, and students of all ages.

It wasn’t so long ago that Madison was considered, despite some great local bands, somewhat of a “flyover” city for jazz. That’s according to Howard Landsman, a board member of the Greater Madison Jazz Consortium and a longtime fan and observer of the area jazz scene. He thinks that’s now changed.

“Madison is on its way to being a jazz destination,” he says. “The profile of jazz on campus and in the community has taken significant steps up because Johannes is here.” His own grandson, a trombonist in Milwaukee, is seriously interested in UW–Madison because of what he’s heard. “The opportunity to be part of a jazz program has made a difference about what he thinks about Madison.”

Each April, following auditions, the honors band assembles at the School of Music to rehearse with Wallmann, the UW Jazz Orchestra, and a grant-funded guest musician.

This year, the guest was Bob Sheppard, a Los Angeles-based saxophonist who’s performed and recorded with the likes of Chick Corea, Herbie Hancock, Peter Erskine, Joni Mitchell, Steely Dan and Stevie Wonder. Sheppard spent nearly a week on campus, holding master classes, rehearsals with both bands, and playing with each in the final concert April 29 at Music Hall.

For some of the high schoolers, having a mere four rehearsals prior to the finale was their first taste of real world pressure, all under the penetrating eyes of the experts. It’s a high hurdle for inexperienced players, says Edgewood’s Backman.

“In a typical high school setting, the students have quite a few weeks to prepare,” she says. “Here they have to challenge themselves to be good in a short time.”

And there was a twist: Cameras from Wisconsin Public Television filmed every rehearsal and the final concert, for an online video series geared to helping jazz instructors.

“We’re looking to make that knowledge available on a statewide level,” says project manager and co-producer Megan Aley. “We’ve captured so many fantastic teaching moments within these rehearsals.” 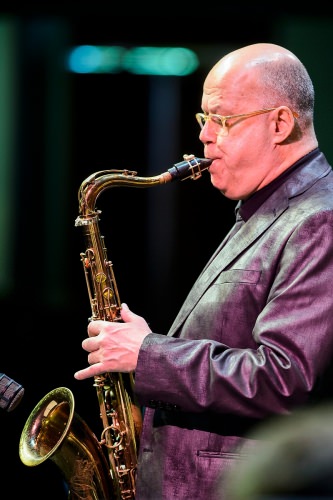 Inside Music Hall, with an audience full of parents, grandparents, family friends and teachers, hands clapped, heads bobbed and fingers snapped in time to the tempos.

Paired with Sheppard on one tune, West High jazz guitarist Xavier Lynn was clearly exulting, head swinging to the beat, knees bouncing up and down.

On “You Tell Me,” a Jim McNeely tune, Chance Stine, a sophomore saxophonist in the UW Jazz Orchestra, played a “dueling duet” with Sheppard. He, too, was grinning.

If the goal of the reinvigorated jazz program is to increase the number of jazz majors and players at UW–Madison, it is working. For the academic year now about to end, 12 students were enrolled; next year, the number is expected to increase to 16 to 20. But that’s not Wallmann’s only desire.

For those students who choose to go into other fields or to another school, he’s confident that their experiences at the UW will reap a lifelong appreciation of the Madison program, one that will not only produce devoted patrons but spread the School of Music’s reputation among potential students in other states — kind of “paying it forward,” as he puts it. Meanwhile, others will show their appreciation in different ways.

“I have a feeling that some of these guys, I will see them again, maybe five, 10 years down the road,” Wallmann adds. “They’ll come back to Madison, after they study elsewhere, and if we can do a small thing to help them become better musicians and to stick with music, or even just be in the audience, that would be wonderful.”

What better example of the Wisconsin Idea, he says. “It’s our version of research: serving the community, creating art and wonderful performances, and involving the public and students beyond campus,” he says.

And he’d be jazzed to know that a few new friendships formed over the past two weeks.

Jacob Brost, a sax player from Portage, can now count over a dozen other jazz fans as acquaintances. “I didn’t know anybody,” he says. “A lot of these people go to the same school, so they already know each other. And then there’s just me, from Portage.”

“I’m just grateful to have been given the opportunity to perform with all these people, who are really good. And Bob Sheppard is really good, too.”