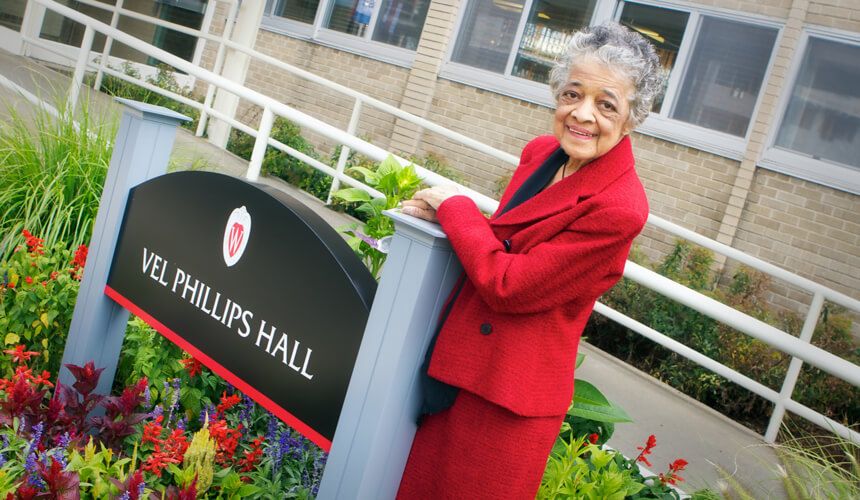 Vel Phillips outside the residence hall named after her. Wisconsin Alumni Association

The University of Wisconsin–Madison community is mourning the loss of UW–Madison alumna and civil-rights leader Vel Phillips. She passed away Tuesday at the age of 95.

“Throughout her life Vel Phillips provided a remarkable, courageous and inspiring example of leadership in virtually every community she touched, including our own campus community,” Chancellor Rebecca Blank said. “As we mourn her loss, we should also celebrate the enduring changes she helped bring about at our university and in Wisconsin.”

“She embraced many ‘firsts,’ was focused on important issues, and had to push back against a lot of resistance and disappointment. That meant she had to be tough,” Raymond said. “She was, nonetheless, a warm, funny, and insightful leader and mentor, with tremendous persistence, who did not give up. I will take away from the privilege of knowing Vel an enduring admiration for her wonderful combination of strong, approachable and indomitable.”

As the first woman and first African American to ascend to major political posts in Wisconsin, Phillips said she found that her gender presented more roadblocks than her race. 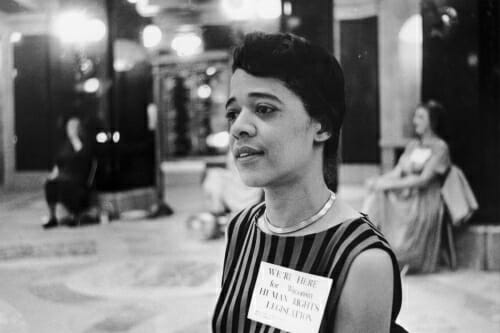 Vel Phillips was the first black woman to graduate from the UW–Madison law school, and she worked against racial discrimination in many roles throughout her career.

“But once you’re there, [white people] will realize you’re just like everybody else,” Phillips explained to Milwaukee Magazine. “But the men never forget that you are a woman. Never, ever, ever.”

Returning home to Milwaukee after her 1946 graduation from Howard University, she married the love of her life, (Warren) Dale Phillips, and joined him to attend the University of Wisconsin Law School. She earned her law degree — an LLB — in 1951.

“I was the first black woman to graduate from the law school,” Phillips recalled in Dream Big Dreams, a 2015 documentary about her life. “I just thought that was the biggest thing that could happen to me.”

As law students, the Phillipses were assigned to housing where neighboring students soon petitioned to bar future black residents. The couple found another UW community that was more welcoming to them and their two sons, but Vel remained deeply affected by the experience. Inspired by advice from U.S. Supreme Court justice Thurgood Marshall to use her profession to make the world better, she would go on to win a historic fight for fair housing and social justice.

Elected in 1956 as the first female and first African American on the Milwaukee Common Council, Phillips sponsored legislation to outlaw racial discrimination in city housing ordinances. Success took six years of political tumult and 200 days of marches and nonviolent community protests, but she was eventually recognized nationally for her leadership.

Today her voice is amplified through the Vel Phillips Foundation, and UW–Madison lakeshore residents celebrate her legacy in Phillips Hall — an honor the namesake said she couldn’t think about too often.

“I just try not to think of it as anything special,” she said, “because I couldn’t have done it alone.”

A special tribute to Phillips is located in the Wisconsin Alumni Association’s Alumni Park, which opened on October 6, 2017. A sculpture of a megaphone with the front page of the Milwaukee Sentinel commemorates the arrest of Phillips during a rally to support an open-housing ordinance in the city. For more information, please visit alumnipark.com.

“So many of our students actually got to hear her speak and learn about her story from Vel herself,” Raymond said. “Whether they were touched personally by her or not, I hope our students see Vel as a great role model, who embraced her legal education and used it to make the change she wanted to see in the world.

“Vel was a tremendous leader here — our first female African-American law graduate, who went on to serve in statewide elected office and was a tireless champion for civil rights. She was a model for others to follow and still is. We will miss her here, and will continue to honor her as a trailblazer at our Law School and in our state.”