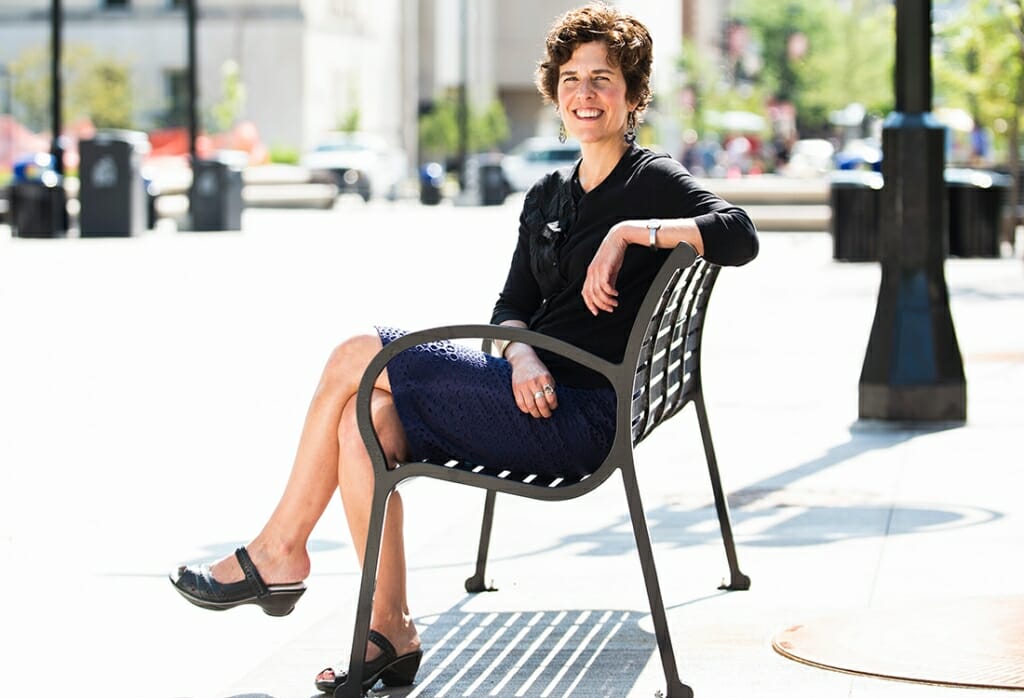 University of Wisconsin–Madison Professor Katherine Cramer has been chosen as co-chair of the American Academy of Arts & Sciences’ new Commission on Reimagining Our Economy, an interdisciplinary and nonpartisan multi-year effort.

Cramer is the Virginia Sapiro Professor of Political Science and Natalie C. Holton Chair of Letters & Science in the Department of Political Science. Her co-chairs will be Ann Fudge, former CEO of Young & Rubicam Brands and Nicholas Lemann, a professor and dean emeritus at the Columbia Journalism School.

The Commission comprises scholars, business leaders, journalists, community and faith leaders, and artists from around the country and across the political spectrum. They will assess the impact of the last half-century of economic policymaking, meet with Americans from all over the country, and generate recommendations meant to create an economy that best serves the needs of the American people.

“With this commission, we can reimagine the nation’s political economy,” said David Oxtoby, the president of the Academy. “The work is crucial, the timing is essential, and the makeup of the commission is unique. We are guided by… the need to reimagine our economy in order to help individuals, communities, and the nation flourish.”

This commission will build on Our Common Purpose: Reinventing American Democracy for the 21st Century, the final report of the American Academy’s Commission on the Practice of Democratic Citizenship. That report acknowledges that economic conditions influence public faith in government, political participation, and civic engagement. While Our Common Purpose includes 31 recommendations to reinvent democracy, it does not offer proposals specifically targeted to address economic issues.

The Commission on Reimagining Our Economy will face these issues head on. Through listening sessions, data collection, and a commitment to cross-partisan work, the commission will develop bold, achievable recommendations that rethink the values that should drive the economy and that advance practices and policies that would create opportunity, bolster financial security, and rebuild trust in institutions.

“Many people struggle to get ahead these days, despite their best efforts,” says Cramer. “It is an honor to work with this talented group of people and have this opportunity to listen to a wide range of people to identify changes that will enable everyone to prosper.”

Cramer is known nationwide for her innovative approach to the study of public life. Her award-winning book, “The Politics of Resentment: Rural Consciousness in Wisconsin and the Rise of Scott Walker,” was hailed as “an indelible portrait of the mind and heart of contemporary populism,” and is now considered critical reading in the effort to understand the deep partisan divides in this country. Cramer is a faculty affiliate with numerous centers and institutes across UW’s campus and was the faculty director for the UW–Madison Morgridge Center for Public Service from 2014-2018.

The Commission is supported by a $1 million grant from the William and Flora Hewlett Foundation and additional funding provided by David M. Rubenstein and the C&P Buttenwieser Foundation.

Some of the other members of the commission include  James Fallows of The Atlantic, actor and filmmaker Tom Hanks, and Mark Trahant of Indian Country Today.

The American Academy of Arts & Sciences was founded in 1780 to provide a new nation with valuable knowledge to navigate its greatest challenges.