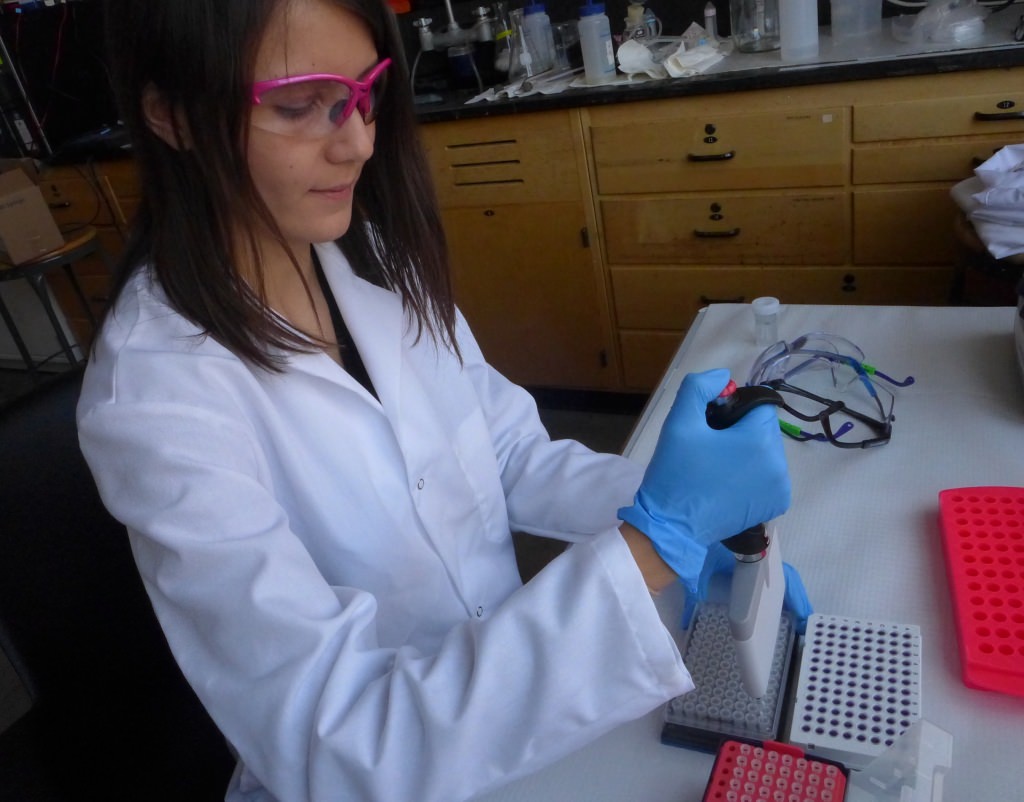 Pamela Camejo of Pathogenomica injects microbial samples into a library for
sequencing. Pathogenomica, a UW–Madison spinoff, uses advanced genetic sequencing techniques for estimating microorganisms in drinking water and other samples. The company has applied for a patent on its method for identifying a broad range of pathogens in samples. David Tenenbaum

Access to clean water is a fundamental part of public health, yet tests for the bacteria, viruses and protozoans that cause water-borne diseases are fundamentally little changed since Robert Koch helped pioneer the germ theory of disease in the 1880s.

Now, a fledgling company that emerged from the University of Wisconsin–Madison College of Engineering promises to change that by applying high-speed genetic sequencing to the difficult problem of detecting — and for the first time counting — these pathogens.

Today’s approaches are too slow and too specific, says Francisco Moya, CEO of Pathogenomica. “The problem with current techniques is that they require specific tests to identify each pathogen. You need to look one by one.”

Currently, organisms in samples are cultured in lab dishes, which can take up to two weeks. Then, after they have multiplied sufficiently, they are tested for pathogens. But each analysis aims at one specific pathogen. 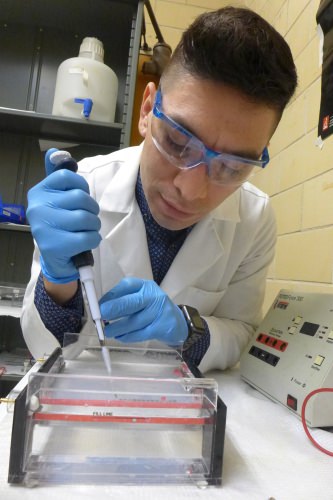 There are many potential pathogens, but it’s expensive to test for them all — a task Moya likens to trying to open hundreds of locks. “With current technology, you would have to design a different key for each lock. It’s much simpler to come up with a master key. We call next-generation sequencing a master key because it can unlock all the known pathogens present in a sample.”

The battle for clean water is far from over, says Moya. The World Health Organization estimates that 842,000 people die each year due to problems with water supply, sanitation and hygiene.

Pathogenomica’s better idea focuses on telltale strands of genetic material that can be used to pinpoint the identity of bacteria, viruses and protozoans. One of these strands, called 16S rRNA, has been used for about 25 years to identify bacteria. But until recently, the necessary sequencing process has been too slow and expensive for routine use in a water quality lab.

No longer, says Moya, a Ph.D. candidate in civil and environmental engineering.

Once the company starts operating in a year or so, it will be a very simple process, he says. “The customer sends a sample, we do the sequencing, and we compare the results to a proprietary database to classify the microbes as pathogenic or non-pathogenic — a bad guy or a good guy.”

At that point, the customer receives a report, showing the identity of pathogens present, along with a risk assessment and an interactive diagram showing the classification of the microbes.

The entire process should take no longer than a week, Moya says.

A faster analysis should enable more effective corrective action, but the fundamental advantage with the sequence-based approach is avoiding the need for a specific test for each pathogen. Typically, drinking water analyses only look at the total number of coliform bacteria — a crude estimate that counts both harmful and harmless bacteria, along with measures for bacteria that cause Legionnaires’ disease and giardia, and for cryptosporidium. In 1993, cryptosporidium sickened an estimated 403,000 people in Milwaukee and sent about 4,400 to the hospital. 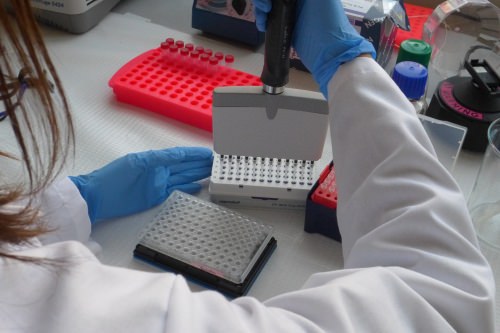 Microbial samples are injected into a library for sequencing. David Tenenbaum

Moya’s co-founders are fellow Ph.D. students Pamela Camejo and Jacqueline Mejia. The fourth co-founder, Veronica Kramm, graduated from UW–Madison in 2016 with a master’s degree in biotechnology.

The Wisconsin Alumni Research Foundation has applied for a patent on Pathogenomica’s analytic strategy.

The need to detect a broad range of pathogens was reinforced at the end of 2015, when a bacterium called Elizabethkingia, which is not detected in current water quality screens, made 63 people ill in Wisconsin. Most of the patients were elderly, and 18 of them died. Although it’s not clear if the fatalities were due to the bacteria or underlying medical conditions, the outbreak does illustrate the importance of screening drinking water for a wider range of pathogens, Moya says.

However, Moya concedes that Pathogenomica’s faster technique would not find a pathogen that’s not been seen before, or one that has significantly changed while acquiring antibiotic resistance. “For that purpose we are working on a second product that deals with whole-genome sequencing to identify the pathogenic potential of these microbes.”

As Pathogenomica finds lab space in the next few months, the initial focus will be drinking water and wastewater utilities and the beverage industry in the Great Lakes region, a market worth about $45 million per year.

The Pathogenomica advantage rests on dramatic improvements in genetic sequencing, Moya says. “Compared to the status quo, we offer a single identification test, faster results and the ability to detect known and unexpected microorganisms. Most important, we are developing a method to estimate quantities, which has not been done previously.”

“This move to genetic sequencing is way overdue,” says Moya’s advisor, Katherine McMahon, a professor of civil and environmental engineering. “There is a lot of potential for much more sophisticated surveillance.” However, she adds, “methods are not what is holding the industry back; the roadblock is the regulations. EPA allows water systems to look in certain ways for contaminants, and it’s hard to get EPA to accept new, different methods.” Part of the equation, McMahon says, is getting costs down.

As drinking water regulations shift their focus to sequencing from culture-based methods, “the key is to be ready,” Moya says. “We think the growing knowledge of what pathogens are actually in our water will help advance improved regulations.”

Pathogenomica’s work was supported in part by the Wisconsin Alumni Research Foundation through the gBETA program. For licensing information, contact Josh Carson at jcarson@warf.org.