UW Press staff turn to teamwork in a time of need

They are in the business of helping others tell their stories in books and journals. But now, they have a story of their own.

In fact, what started as a pleasant walk for members of the University of Wisconsin Press staff, as they returned to their Monroe Street office on a sunny Friday afternoon last month from a meeting on campus, turned chaotic.

“We had just stepped out of the intersection that the van had passed through,” McMahon recalls. 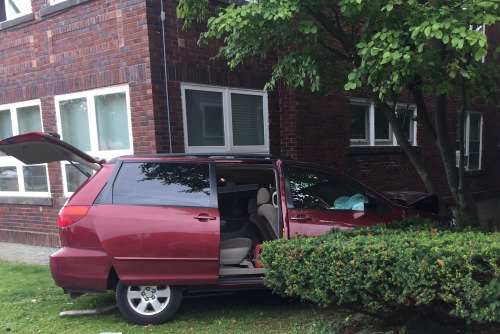 The van crossed several lanes of traffic, plowed through two cement barriers at a construction site, jumped a curb, struck the corner of an apartment building and then came to rest on top of a moped after hitting a tree. Photo: Sheila McMahon

The van crossed several lanes of traffic, plowed through two cement barriers at a construction site, jumped a curb, struck the corner of an apartment building and then came to rest on top of a moped after hitting a tree. Madison Police reports indicate that the 70-year-old driver, who survived, likely had a seizure prior to the accident.

While they work in different departments at UW Press, which is administratively housed under the Vice Chancellor for Research and Graduate Education, they jumped into action as a team. McMahon called 911 and provided information about the scene along with Meier.

“Within seconds of realizing there had been an accident, Sheila called 911 and I was impressed by how quickly everyone just responded,” Ferguson said.

Pingel, Lauer, Ferguson and Gunnison ran to check on the driver, who was still having a medical problem. There was smoke coming from the hood of the vehicle and the van doors were locked and windows rolled up. Pingel used a pipe from a nearby construction site to eventually shatter the back window.

Brittany Krug, who lives in a nearby building, told police she heard the crash and ran to the scene, joining the UW Press crew. Ferguson covered the broken glass in the window with his coat and Krug climbed through and unlocked the front passenger door. Lauer then climbed into the passenger side to turn off the ignition, which was difficult given that the airbag had deployed.

“It was really smoky in the van,” Lauer recalls. “I also tried to turn off the radio and I failed — I pressed every button on the console. The music was playing quite loudly. Even turning off the ignition didn’t stop the music,” which Ferguson pegged as REO Speedwagon’s “Time for Me to Fly.”

It was a team building exercise, but not one they say they would recommend. They do agree, though, that it’s a reminder to take a first aid refresher course.

Krug, who is trained in first aid and CPR, attended to the driver, unbuckled his seatbelt to assist in his breathing and encouraged him to remain still and wait for EMTs.

Pingel, who cut his hand and arm in the process of smashing the van window, was later taken to the hospital and received eight stitches.

The driver told police that he did not recall being involved in the crash, but remembers waking up in the driver’s seat. He recalled seeing people trying to help him while he was trapped in the van. He was admitted to the hospital for evaluation.

“The way we worked together showed the character of everyone involved,” Pingel says.

“And it wasn’t just the six of us,” McMahon notes. “It was the neighborhood that responded.”

It was a team building exercise, but not one they say they would recommend. They do agree, though, that it’s a reminder to take a first aid refresher course.

After hearing about the accident and his staff’s response, UW Press Director Dennis Lloyd responded, “I’m so proud of them all, incredibly impressed by their bravery, compassion, and composure, and deeply grateful that no one was more seriously injured.”

Madison Police are impressed as well. Pingel and Krug have been nominated by the police for citizen awards.