Recent news stories indicate that state legislation allowing concealed weapons in campus buildings may be introduced early in the next legislative session.

University of Wisconsin–Madison campus leaders say they will continue to oppose any legislation that would allow concealed weapons into university buildings. When this was last considered by the Wisconsin State Legislature, every UW System police chief signed a letter opposing campus carry legislation. 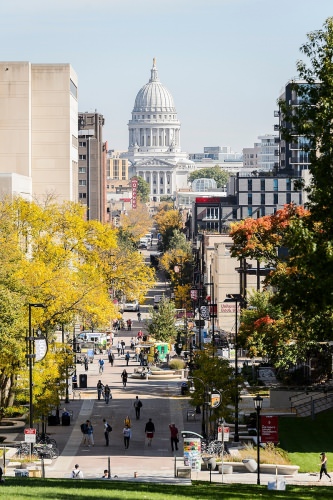 The state Capitol, as seen from the UW–Madison campus in October 2016. Photo: Jeff Miller

In advance of the upcoming session, university leaders have been actively engaging with legislators to express their opposition to this legislation and to learn more about when such a proposal might be introduced. Information, as it becomes available, will be shared with the campus community.

“Many parents would have concerns about sending their children to a campus that may have guns in dorm rooms or at football games,” says Chancellor Rebecca Blank. “Campuses have so many unique safety challenges. Adding concealed weapons to the many challenges our police department has to deal with would put everyone at risk. We remain absolutely opposed to any changes that would weaken the current prohibition on concealed weapons in campus buildings.”

Rep. Jesse Kremer, R-Kewaskum, has signaled his intention to reintroduce a bill to allow campus carry in the next legislative session slated to begin next month.

UW-Madison recently installed metal detectors at the Kohl Center to improve security at home sporting events and plans on adding them to more venues in the future.

“We have devoted significant resources to security on campus. Allowing concealed weapons into buildings like the Kohl Center would be a giant step backward,” says Brian Bridges, interim chief of the University of Wisconsin Police Department. “Having guns in classrooms, stadiums and dorms would be an enormous challenge for us that would put the safety of our students, faculty, staff and guests at risk.”