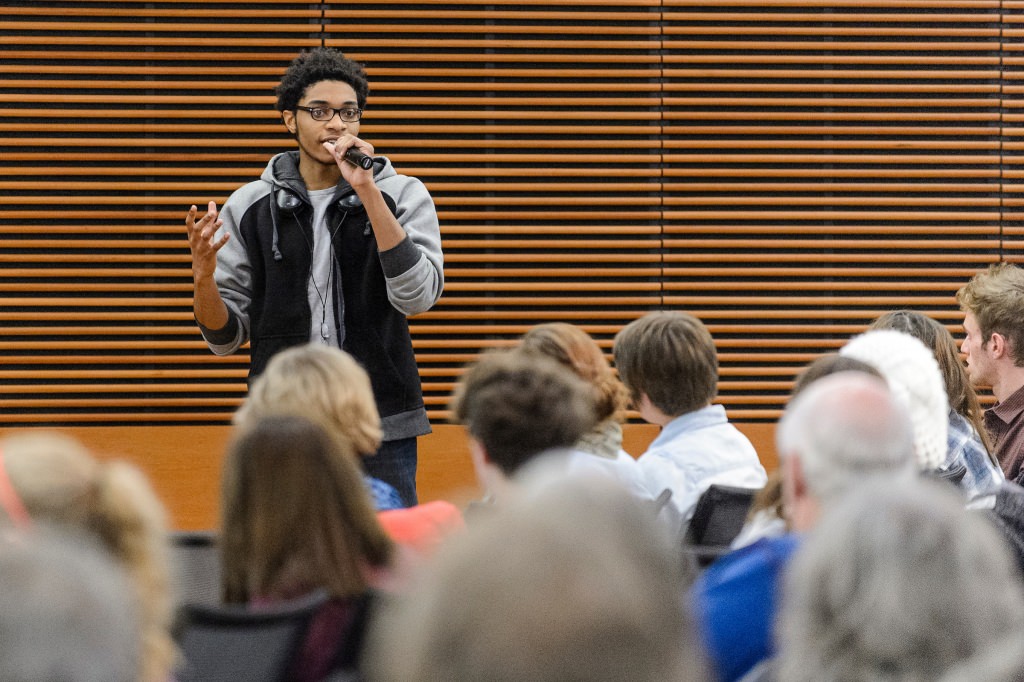 Deshawn McKinney is a man with a plan. Kind of.

“My path in college has just been letting the wind carry me wherever it does and I’ll land somewhere,” says the UW–Madison senior majoring in English-creative writing. “That’s how it kind of feels. I’m at a point now where I trust that process and I trust that path. Whatever happens, you move on.”

So far, letting the wind carry him has worked pretty well. He has been named a winner of the Marshall Scholarship, a prestigious award given to up to 40 scholars each year to study at the graduate level at an UK institution in any field of study. In November, he was named a Rhodes finalist.

McKinney grew up on the northside of Milwaukee. There weren’t a lot of opportunities for kids. When he was a freshman in high school, he joined UW–Madison’s PEOPLE program, a pre-college pipeline for students of color and low-income students, many of whom are the first in their families to attend college.

He applied for First Wave his senior year of high school and was accepted. The First Wave Hip Hop and Urban Arts Learning Community is a cutting-edge multicultural artistic program for incoming students that offers a four-year full tuition scholarship to UW–Madison. Bringing together young artists and leaders from across the United States and beyond, First Wave offers students the opportunity to live, study and create together in a close-knit, dynamic campus community. It is the first university program in the country centered on urban arts, spoken word and hip-hop culture.

McKinney’s creative work centers on issues of identity and the intersectionality of race, class and gender. He’s also been an active supporter of Black Lives Matter and is working on improving campus climate. Last year he became president of the Wisconsin Union, chairing meetings of the Union governing board, which includes students, faculty, staff and alumni, as well as overseeing programming at the Union.

“Getting to know Deshawn has been one of the highlights of my time at UW–Madison,” says Julie Stubbs, director of the Undergraduate Academic Awards Office, who assisted him through the application process. “He certainly has all of the academic and leadership credentials you’d expect from a Marshall Scholar. But what I admire most about Deshawn is his ability to connect with people. He listens with interest and empathy. He engages in difficult conversations about important issues, even with those who disagree with him. And that engagement creates the possibility for real change.”

“This campus is huge. The opportunities that are here are mind blowing.”

As a kid, McKinney didn’t get to travel much. As a college student, he’s traveled to England, France, Japan, China and Jamaica. And his passport is ready for more.

“One of the most important parts of travel is humanizing other people,” McKinney says. “You get to see that they have many of the same struggles and joys.”

While McKinney is happy for the recognition, he wants to encourage other students to think a bit bigger, whether that means applying for scholarships, study abroad opportunities or just trying things they’re a little unsure of.

“Failure isn’t failure if you turn it into something else. You fall, then you get back up, brush yourself off and move forward with more knowledge and understanding than before you failed,” McKinney says. “It’s not a bad thing. You realize the world doesn’t end.”

He’s hopeful that fellow students see his success as an example of what can be possible.

“This campus is huge. The opportunities that are here are mind blowing,” McKinney says. “Everything here is yours.”

McKinney knows he wants a career in public service, helping others. What exactly does that look like? He’s still figuring it out. What he does know is that looking for opportunities and taking chances has worked well for him.

“I feel good,” McKinney says. “Wherever I end up, I think I’m going to end up in the right place.”